When browsing through some of Sweetnicks' old posts, I found this recipe. It reminded me of my mom's chocolate chip pound cake, which is the only chocolate cake I like. Being that my brother likes white chocolate, I decided that it would be a good cake to try out. Turns out to be a good weekend to try it. My aunt and uncle from Houston are in town and we had them over for Sunday lunch.

The reports were good. I served it with a decoration of chocolate syrup and ice cream. The consensus was that the ice cream overpowered the flavor of the cake. Philip, the brother, seemed to like it (ate his whole piece) and that's good, because he's funny about the desserts he likes. The men thought that the chocolate did the same, but the women said the chocolate was great. Go figure! Uncle Daniel said "The flavor of this cake is so delicate that the ice cream overpowers its flavor. I think it would be great on its own." Daddy thinks that instead of using chocolate sauce, a raspberry sauce should be used. I think that I have to agree with him! Next time, raspberries here I come! 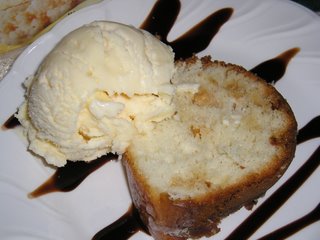 Preheat oven to 350 degrees F. Combine all ingredients except chocolate chips in an electric mixer. Beat on high for several minutes to get a fluffy batter. Stir in chocolate chips. Pour into a greased bundt pan. Bake for 40-55 (I had to use 55, but could probably have done a tad shorter. 40 was definitely not enough) minutes. Remove from oven and cool.

IF DESIRED: Make a glaze of milk and confectioner's sugar and pour over the cake.
Posted by Unknown at 3:13 PM

That looks so yummy-plain or with the sauce and icecream. I'm not picky ;)

Annie - Thanks! I think I agree with the men about the ice cream. It really kind of covered up the white chocolate flavor. I did have fun decorating the plate, though! Fun stuff!

I find that white chocolate is often too delicate to detect in recipes. I agree that rasperry or some other fruit would be a good pairing.

This looks yummy! I am going to have to try!

Glad everyone seemed to like it. The original recipe actually has a raspberry sauce to go with it, so your instincts are spot on. I nix the sauce (and all other toppings) and serve it on its own - still just as yummy.