Cleaning out the Freezer


I'm trying to help my parents clean out their freezer, so when we were invited to my grandmother's for dinner and told to bring dessert, I decided to use the frozen peaches and raspberries we had. I used a recipe for peach raspberry crumble that I found on www.allrecipes.com. The fruit was beautiful even after being frozen for a while. The recipe called for fresh fruit but I used what we had. I didn't thaw the fruit, as that is usually the way you are instructed to bake with frozen fruit.

This dessert tasted good, but when it came out of the oven it was quite soupy. AFter it cooled some, it firmed up a good bit. However, I was NOT pleased with the texture of the crumble on top. It was mushy instead of crispy. I followed the instructions exactly. Anyone have an idea about how to crisp the topping? 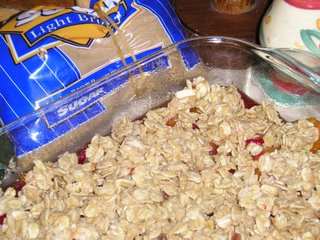 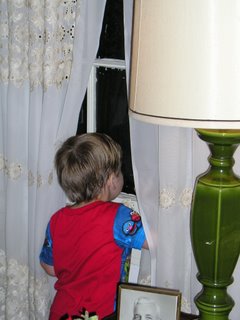 On a slight non-food side-note. At my grandmother's, we visited with my aunt and uncle who had brought their grandson with them. He is not quite 3 and is SO smart. He's talking in whole sentences of 4+ words! Anyway, while my dad and his grandfather were outside working, we showed him how to look out the window at them. After playing there a little bit, he walked away from the window and said "Love that window!" He also told his "Bunny" (grandmother) "I like my Mama." and his "Badeebah" (grandfather) "Is Bunny coming? (Yes.) Good. I like her." How sweet can little children be! What a blessing they are!
Posted by Unknown at 8:22 PM

The crisp I usually make (with peaches and berries too!) calls for quite a bit of flour in the topping (1 1/2 cups). I wonder if that's what yours is missing? I also add flour to the fruit; it helps to thicken it (especially if the fruit has been frozen.)

Hope you're having a good Saturday!

Claire, Jennifer may be on to something. I usually use flour in the topping as well. Another idea, is to use chopped toasted nuts.
Also, tapioka pudding makes a great substitute for flour or cornstarch in pie fillings. I use it all the time!

Jennifer - Thanks for the tips. I think this topping was supposed to be more of an oat topping but some flour may have helped. The filling actually ended up being okay after it had cooled a little.

Annie - the nuts sound wonderful. However, I'm limited with that if I think my brother may eat some. He won't eat it if it has nuts in it.