When I was little the most popular birthday cake to have was the ice cream cake from Dairy Queen!  It had chocolate ice cream on the bottom with this wonderfully thick and sticky chocolate fudge center with little chocolate crispies, all topped by vanilla ice cream....YUM!  The July 2010 Daring Bakers’ challenge was hosted by Sunita of Sunita’s world – life and food. Sunita challenged everyone to make an ice-cream filled Swiss roll that’s then used to make a bombe with hot fudge. Her recipe is based on an ice cream cake recipe from Taste of Home. 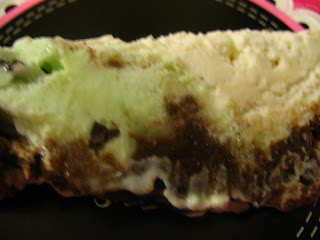 When I saw that this was the Daring Baker's challenge, I thought about that cake.  Then I remembered how my friend Katie (who JUST got married!) loved that cake.  So, I decided to use the opportunity to make the cake for her bachelorette party.  The problem....I'm on a Q4 call month and do NOT have a lot of time! 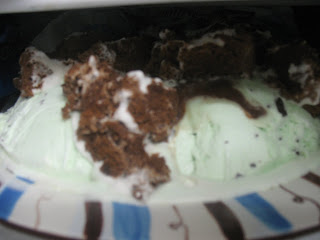 My plan to make the ice cream fell through and I had to "cheat" on the challenge and use store bought ice cream.  Sorry!  The next failure was the cake...though I followed instructions, the first cake would NOT cook!  By the time the center was near bakes the outer edge was crispy.  The next cake cooked but left this pretty present after rolling. 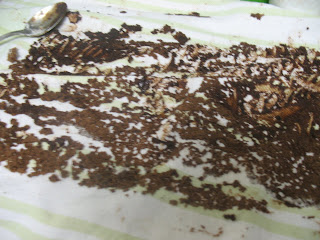 Yeah, did not work so well!  I worked with what I had, though, and put the cake rolls on top (oops, misread the layering instructions!).  This was okay until I had to transport the cake to my friend's house 20 minutes away!  By the time I arrived, the ice cream had softened (unbeknownst to me) and the plate was slightly tilted when I put it in the freezer (again...unbeknownst to me). 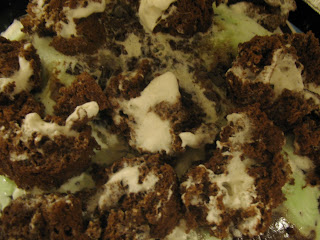 Sooooo, when I pulled it out to serve, it was even uglier than when I started!  All that said, it still tasted great...and I believe that if I had been able to freeze it for longer that chocolate fudge filling would have just like the wonderful Dairy Queen cake! 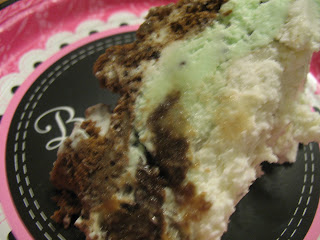 Thanks for the challenge Sunita!  Check out the recipe on her blog.
Posted by Unknown at 7:27 PM 4 comments:

A Tale of Two Desserts....in One

I have had this recipe hiding in my photo files for a few month...I couldn't find the recipe I used.  Why?  Because it was on the bag of flour and I threw it away!  So, today, I got some of that flour and now have my recipe.  :-)  A few months ago I decided to make a decadent treat...cookie dough topped brownies.  YUM!  The first time I made them, I overcooked the brownies and the did NOT work. 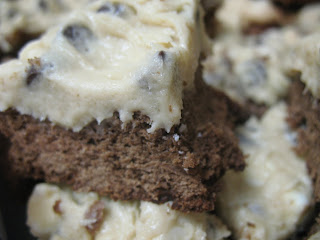 I actually threw the whole batch away.  But being the dedicated cookie doc that I am, I made another batch...and they were much better.  Notice a difference? 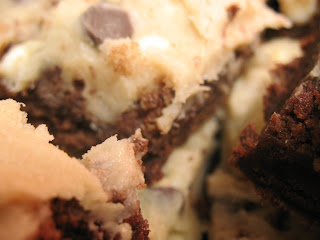 Let me just say, by lunch time, the entire batch was GONE...our lounge devoured them!  In fact, my best friend grabbed one early b/c she figured they'd be gone if she didn't.  She was right!  So, I highly recommend trying these! 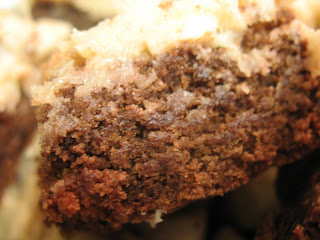 Preheat oven to 325 degrees F.  Melt chocolate chips and butter together.  Beat eggs; then beat in sugar, eggs, and butter mixture.  Stir in vanilla.  Slowly add flour.  Pour into greased 13 X 9 pan and bake for 35 minutes or until beginning to pull away from the edge of the pan.  Allow to cool.

In a small bowl, cream butter and sugars until light and fluffy. Beat in milk and vanilla. Gradually add flour and salt. Stir in chocolate chips.

Once the brownies are cooled, spread the cookie dough topping over the brownies.  Cut into squares. Store in the refrigerator.
Posted by Unknown at 4:01 PM 2 comments:

Last month when I was in the ER, I had a stint of 6 night shifts in a row followed by 4 more day shifts.  All in all, I was working 13/16 days at the end of the month. So, I decided that I needed to prepare some food ahead of time to take with me to work.  No way was I going to want to cook after 12 hours of work overnight...not happening.  So, I loaded up on fresh veggies and made a summer veggie soup (which I'll tell you about later) and a Greek Barley Salad. 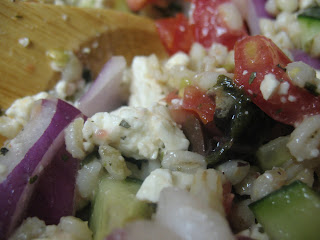 YUM!  It turned out delicious!  I had seen a couple of versions on some other blogs and decided I should try my hand at it.  Originally, I had planned to add some balsamic vinegar to the salad, but when I tasted it there was no need for extra flavor...I suppose the olives brought some of the brine with them and flavored the whole thing on their own.  It was simple, easy and OH so yummy!  Just add some pita and even hummus and you are ready to take your taste buds on a trip to the Mediterranean! 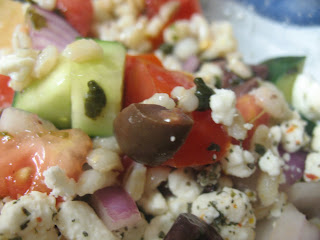 Cook barley as instructed on package.  Meanwhile, cube cucumbers and tomatoes.  Dice onion.  Combine in a large mixing bowl.  When barley is ready, stir it into the prepared vegetables.  Season with Cavender's Greek seasoning.  Add olives and feta.  Enjoy!
Posted by Unknown at 9:05 PM 4 comments:

It's a Toffee Job, but Somebody's Got to Do It!

I have officially started my second year of residency, which means I am an upper level.  I lead the team, have to see all of our patients, and help the interns make decisions about patients overnight (if they need help).  I definitely have to get used to is because some of my responsibilities have changed from those I had last year.  I have survived the first call, which all in all wasn't too bad, though I think we admitted more than any team over the 4 day stretch.  I made some cookies, as per usual, but didn't take a picture.  I'm trying to re-create a cookie (that I have never tasted, BTW) for one of my mom's friend.  A chocolate and pecan cookie that is "chewy" and has "air pockets" in it...they apparently used to make it at MSU in the 70's but don't anymore!  Anyway, I took the first version of this cookie, and though good, I don't think it was "the" cookie.  I'll keep trying.  Any suggestions on reaching these goals?! 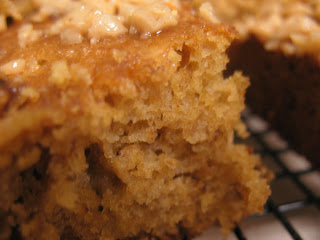 Anyway, I made this snack cake for a call many months ago.  The inspiration was a toffee snack cake that Peabody made.  I LOVE toffee...and to me, adding banana in with it is just perfect.  I've done it before in a nice, light summer pie and the results are great; so why not try in a cake.  I had a banana left over and decided to add that to these bars.  The results were great.  A not too banana flavored cake that remained moist and had a little crunch from the toffee!  Yum! 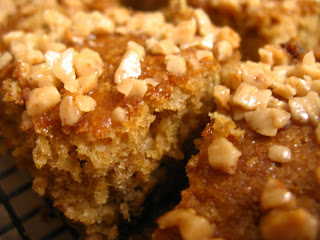 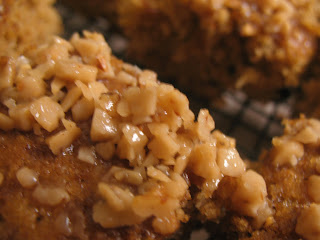 Spray a 8-x-8-inch pan with baking spray. Set aside.
Using a stand mixer, cream together the butter, banana, and brown sugar on medium speed until light and fluffy, about 3 minutes.
Add the egg and vanilla extract and beat until incorporated.
In a small bowl whisk together the buttermilk and sour cream.
Turn mixer speed to low. Starting with the flour alternate flour and buttermilk mixture ending with flour. Fold in ½ cup toffee pieces.
Pour into prepared pan and bake for 25-30 minutes. Insert a knife or wooden skewer to test for doneness.
Remove from oven. Sprinkle the remaining 1 cup toffee pieces on top.Store in an air tight container.  Enjoy!
Posted by Unknown at 6:45 PM 4 comments: