As a doctor, I become a part of many people's lives.  They become a part of mine.  This time comes in segments.  Some people, I am a part of a very small segment...and only one.  Other people, a larger segment...but only one.  And other people, small segments...but multiple ones.  Some people are a part of multiple segments of my life.  One of my best friends went to school with me, works with me, we hang out at eat others' house, and I am her son's doctor:  MANY segments! 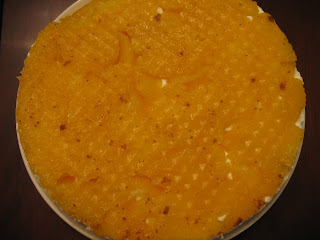 Other people I went to school with, go to church with, and will work with.  Sometimes, however, you have a person who was a part of a large segment of your life but something changes, they don't show up as much.  It's like part of the segment is taken away.  That can sometimes make for a sticky situation.  That's how I felt when I was preparing the oranges for this Daring Baker's challenge...very sticky!  However, learning to segment an orange was one of my favorite parts of this challenge...and orange tian.  I can honestly say I would have NEVER made this dessert if it hadn't been selected for this month's challenge. 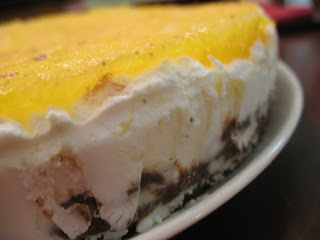 The 2010 March Daring Baker’s challenge was hosted by Jennifer of Chocolate Shavings. She chose Orange Tian as the challenge for this month, a dessert based on a recipe from Alain Ducasse’s Cooking School in Paris.  I had kind of mixed thoughts on the final result.  First off, I really like pate sablee.  It's just such a simple and pleasing component, though I overcooked mine so it was a bit too crumbly!  The marmalade was a fun thought.  I was really excited about trying this but when put into the final dessert, I was really distracted by it.  I felt like the chewiness of the orange was just too much for the dessert.  To go through the creaminess of the whipped cream and hit an almost hard orange piece was just not pleasing for me. 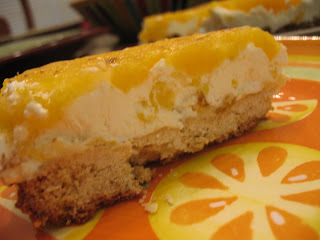 The next two problems could have been (were likely) due to mistakes on my part.  First the caramel...I misread the instructions and put the liquid in before cooking the sugar.  This led to the "caramel" being more of a simple syrup!  Oh, well...I still soaked the oranges in it but didn't use it for decoration in the end.  Then the whipped cream...well, I got half and half.  Yeah, that doesn't whip!  :-)  So, I had to go back (post-call!) to the store and get the real thing.  I didn't use the gelatin though...just used some cream of tartar...and it worked just fine!  In the end, I really like the combination of the oranges and whipped cream (did it take anyone else back to summers as a child and eating dreamsicles?) but, sadly, the marmalade ruined it for me.  I served this to some friends who I had over for dinner, and they both enjoyed it but I don't think I'd make this again. 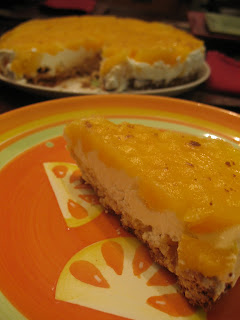 However, I am glad that I now know how to segment oranges and did enjoy trying this tian!  Thanks for the challenge, Jennifer!
Posted by Unknown at 8:00 AM 11 comments:

As said in the title, PLEASE, forgive the photography!  I forgot my camera and had to use one I was not aquainted with.  Do not judge with your eyes...let you tastebuds give it a try! 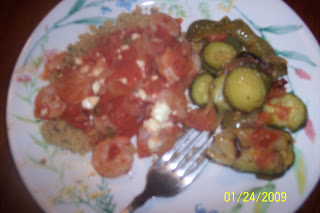 I made this dish a long time ago and have been waiting to post it, hoping that I'd make it again and could take some better pictures.  However, I have not made it again yet (thought I plan to soon...I have all but the feta available) and it is so good, I feel that I need to share this recipe with you! 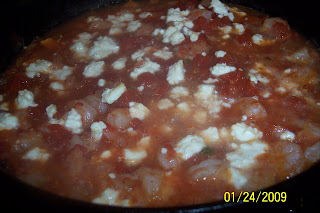 I found the recipe on one of the first sites I ever visited, Sweetnicks.  She has been cooking great dishes for adults and dishes for the kiddos for several years (well, Nick is 7, I think, so gather from that as you may).  Anyway, I made this one day when I went to a friend's house to eat.  She doesn't like shrimp (go figure!) so we made a small dish for her with chicken.  Both versions were delicious!  I served it with roasted zucchini and couscous.  Delicious and healthy!

Baked Shrimp with Tomatoes and Feta
Recipe courtesy of Ellie Krieger
Preheat the oven to 425 degrees F.  Heat the oil in an oven proof skillet over a medium-high heat. Add the onion and cook, stirring, until softened, about 3 minutes, then add the garlic and cook for 1 minute. Add the tomatoes and bring to a boil. Reduce the heat to medium-low and let simmer for about 5 minutes, until the tomato juices thicken.
Remove from the heat. Stir in the parsley, dill, and shrimp and season with salt and pepper. Sprinkle the feta over the top. Bake until the shrimp are cooked through and cheese melts, about 12 minutes.

I love breakfast foods.  In fact, it is one of my favorite things to have for supper!  However, I have yet to find a plain biscuit recipe that is great.  For some reason, the frozen Pillsbury biscuits are the best I've found.  Even homemade ones aren't that great.  That tend to be heavy and flat.  Plus, they use so much butter, making them not really the best choice for you health-wise. 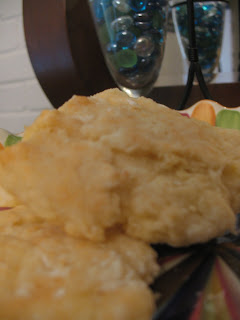 However, I found this recipe from Cooking Light and it pleased me!  No, it's not as fluffy or buttery as those lovely frozen biscuits.  But it is lighter than the typical southern biscuit.  Mine came out a bit flatter than those in the CL picture but I think I probably rolled them flatter as well. 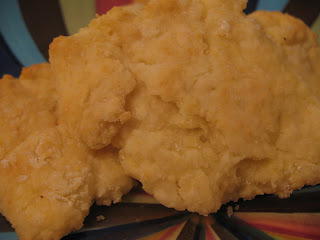 So, if you get a hankering for biscuits but that heavy southern biscuit doesn't cut it and you want to keep it light, try this recipe!  (There are also some variations at the bottom of the main recipe for pumpkin biscuits and parmesan biscuits) 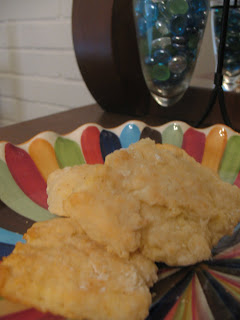 That was the response when I asked my fellow intern what treat she wanted for our next call.  Fruity, not fatty.  Hmm...actually, I immediately had a recipe in mind!  I had seen this recipe a week or two earlier on Emily's blog and knew that at some point I wanted to try it. 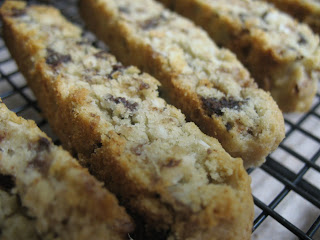 I haven't made biscotti in quite a while but they are wonderful little treats.  Some versions are very crunchy and do best when enjoyed when eaten with a cup of coffee or tea.  Others are soft enough to eat on their own.  These fall into the later category.  Quite often the softer versions are more of a cookie in ingredient content, having 1/2 cup of butter or oil.  These, however, achieved a soft texture without that amount of oil.  It only has 3 Tablespoons and I may have used less...I don't know...didn't measure!  :-) 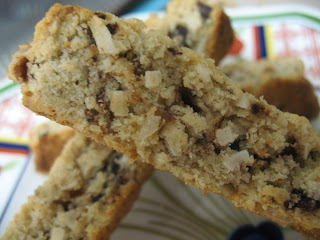 When I tasted the dough prior to baking, the rice flour was a bit overwhelming in taste (probably due in part to using BROWN rice flour instead of white rice flour, but it's what I have...and I have decided that I really like rice flour, BTW).  So, I added an extra banana.  Let me tell you, these biscotti were SO good!  Not overwhelmingly banana but you could definitely taste it.  I would totally make these again.  Oh, and if you have cinnamon chips...they go great in these!  Thanks for a fantastic recipe, Emily! 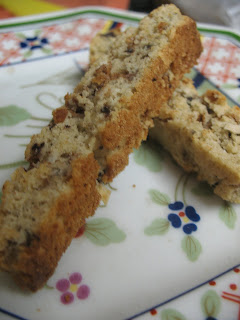 Heat oven to 350 degrees F. Coat a large cookie sheet with cooking spray or get baking stone out. 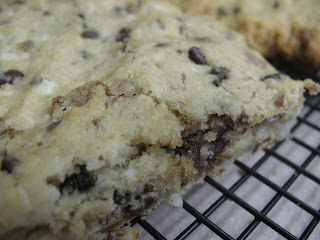 Transfer to a cutting board and cut rolls diagonally into 1/2-inch thick slices. Place, cut sides down, on baking sheet. Reduce oven temperature to 300 degrees; bake 10 minutes. Turn cookies over; bake an additional 10 minutes (cookies will be slightly soft in center but will harden as they cool). Remove from baking sheet; cool completely on wire racks.

Makes about 2 dozen biscotti (though I'm pretty sure I got about 3 dozen)
Posted by Unknown at 5:57 PM 4 comments:

Sometimes when you don't have much time, little bits of inspiration are important.  One of the challenges of residency is making healthy meals that are quick and will last for several days.  One day, inspiration hit! 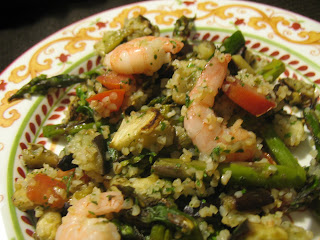 I have had a box of taboulea sitting in my pantry for a while.  I also had some frozen (pre-cooked, pre-shelled, de-veined!) shrimp...all I have to do is thaw!  Hmmmm...just need something else.  What would I turn to?  Only my favorite!  Roasted veggies.  This turned out to be SOOOO good!  The perfect Mediterranean meal! 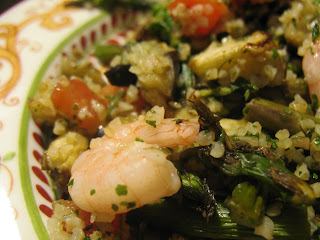 Roast eggplant and asparagus in oven for 15-20 minutes at 400.  In the meantime, cook taboulea as directed.  Also, thaw shimp in a bowl of water.  In a large bowl, place, cooked taboulea then add veggies, tomato, and shrimp.  Stir to combine.  Enjoy!!!

*You can use whatever veggies you like or have on hand.  It would be good with squashes, peppers, onions, broccoli, etc.
Posted by Unknown at 6:44 PM 3 comments: