This past Saturday, two days after Christmas, Caleb turned three months old...thirteen weeks!  I cannot believe he is that old. 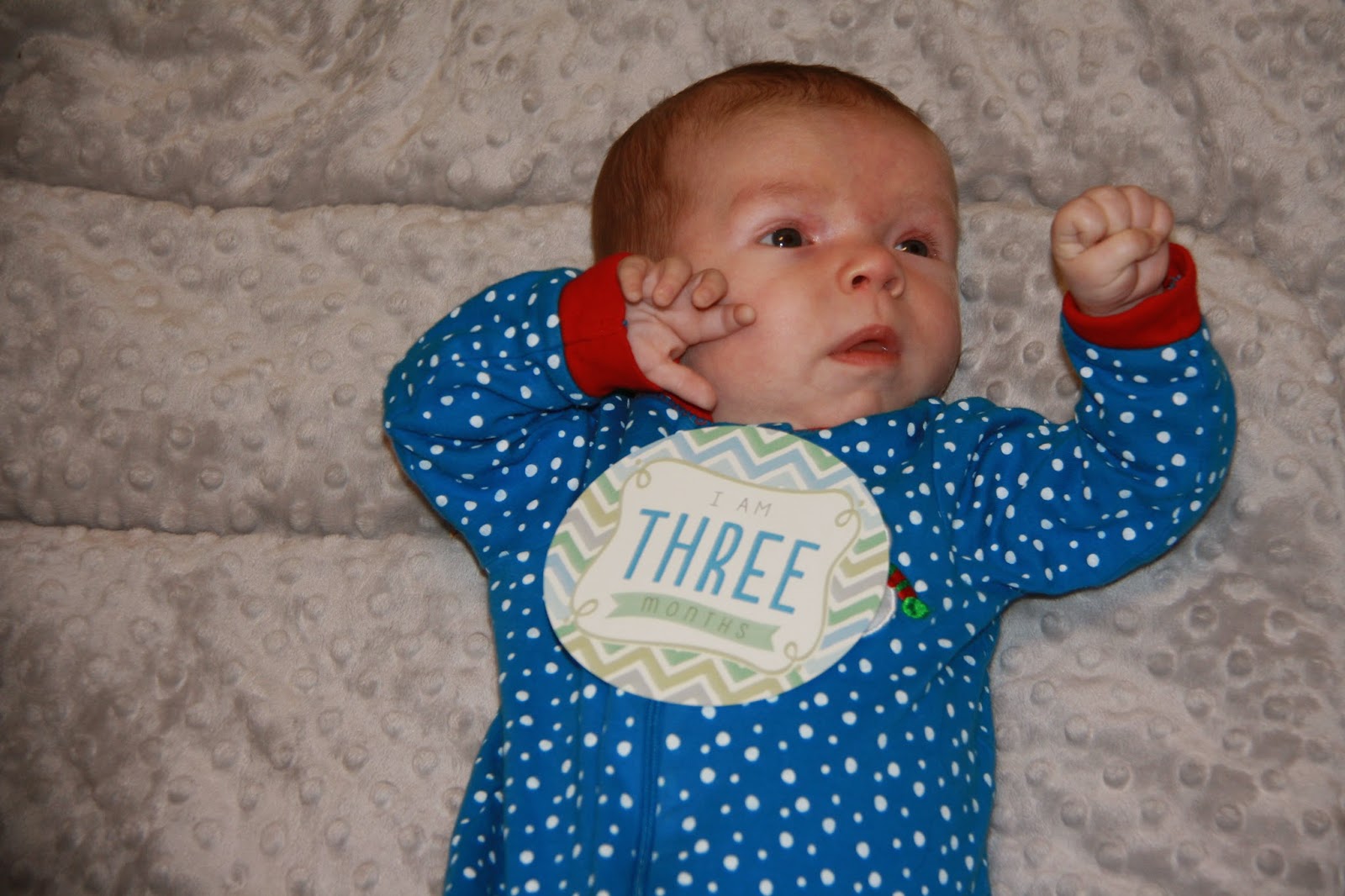 It's funny how slow time has gone (it seems like forever ago that I was in the hospital to have him) but how quickly it has gone as well (I mean, he's a whole quarter of a year old!)! 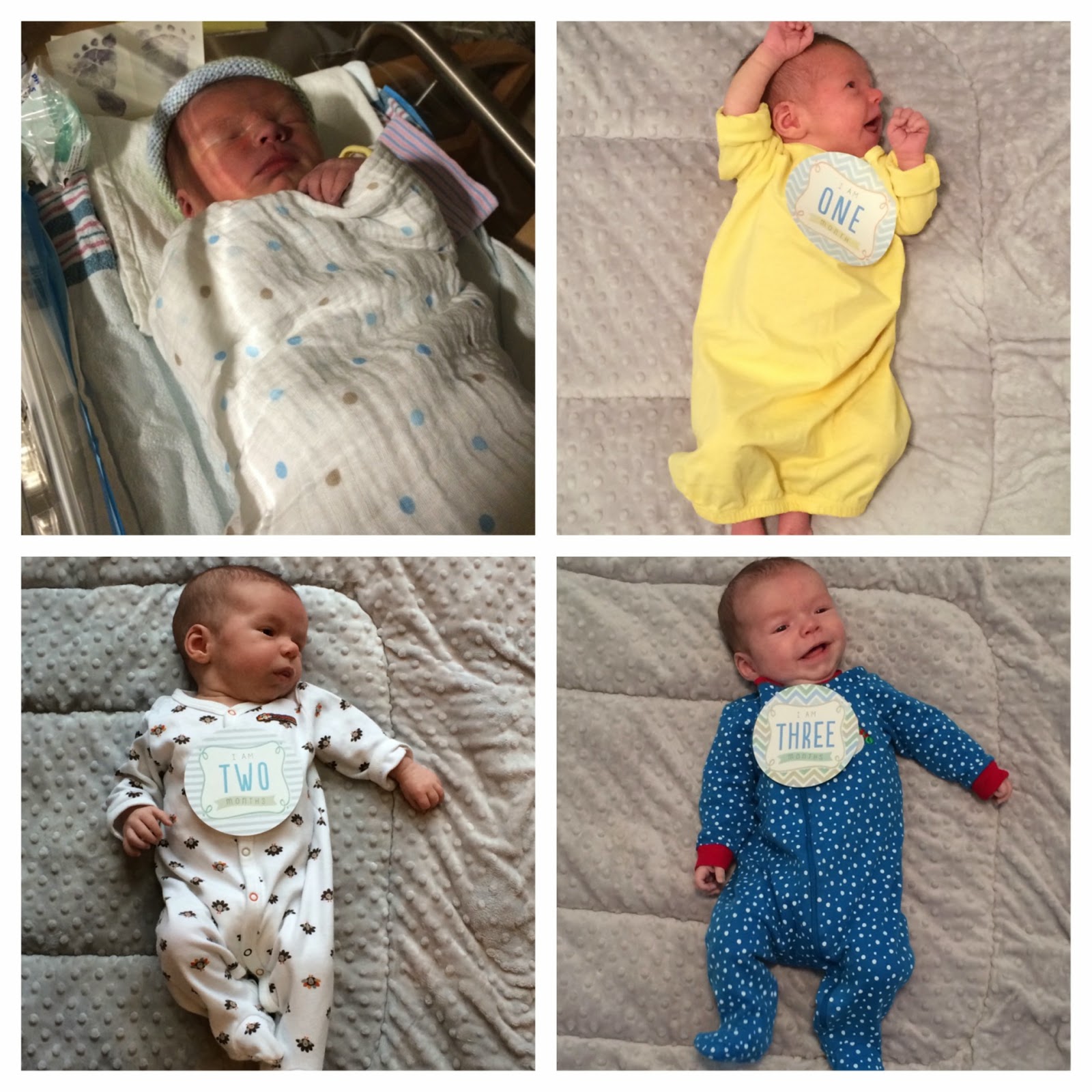 It has been so much fun to watch my sweet Caleb's personality.  He is pretty chill really only fussing if he is sleepy or hungry.  Even a dirty diaper doesn't bother him too much.  He is my VERY happy baby!  He has this wide mouthed smile that will just melt your heart.  If he is REALLY smiling, his eyes disappear. 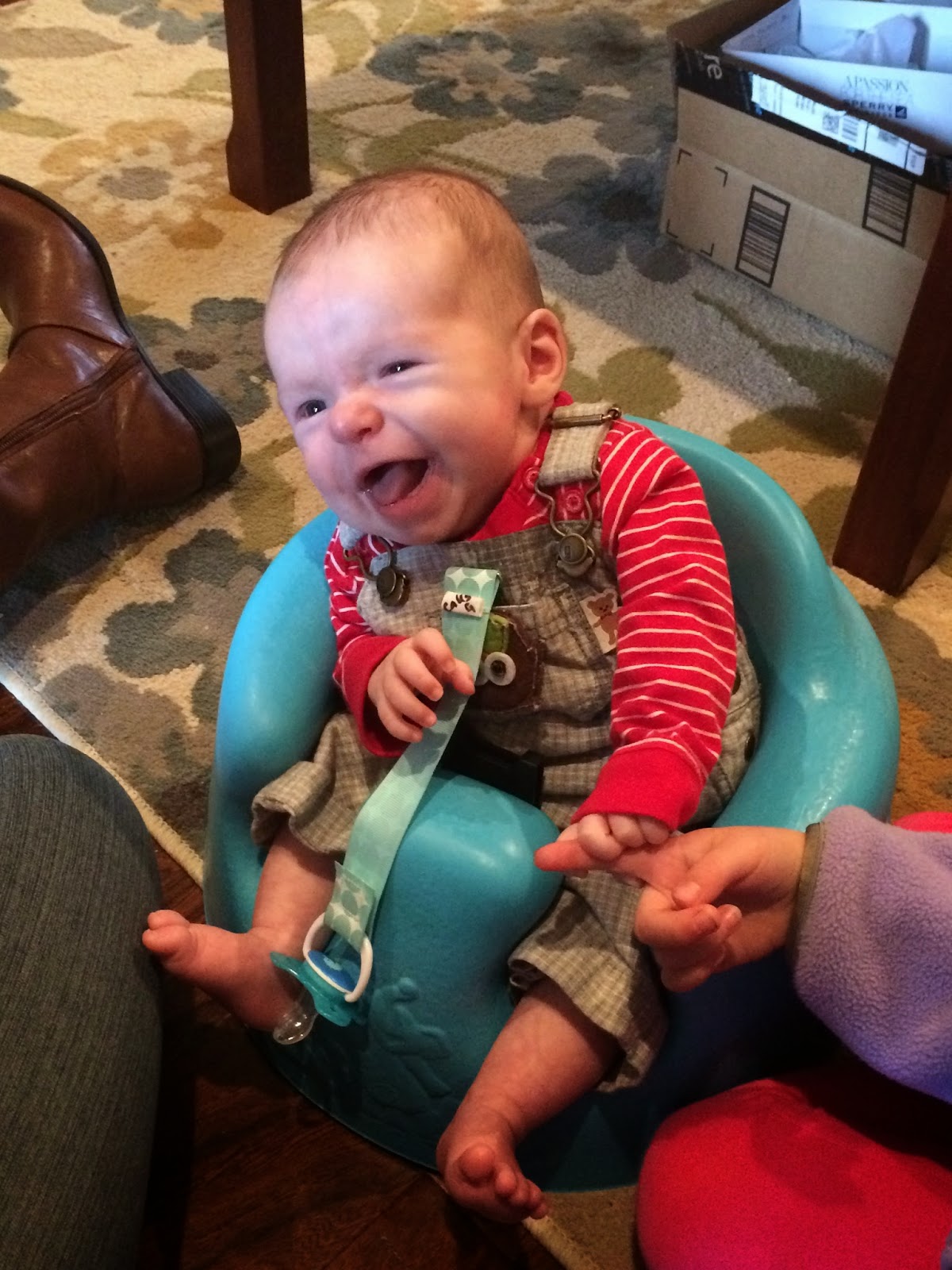 Things that make him smile: his sissie, Mama, Daddy, the little butterfly on his carrier, seeing us in the morning, someone smiling at him! 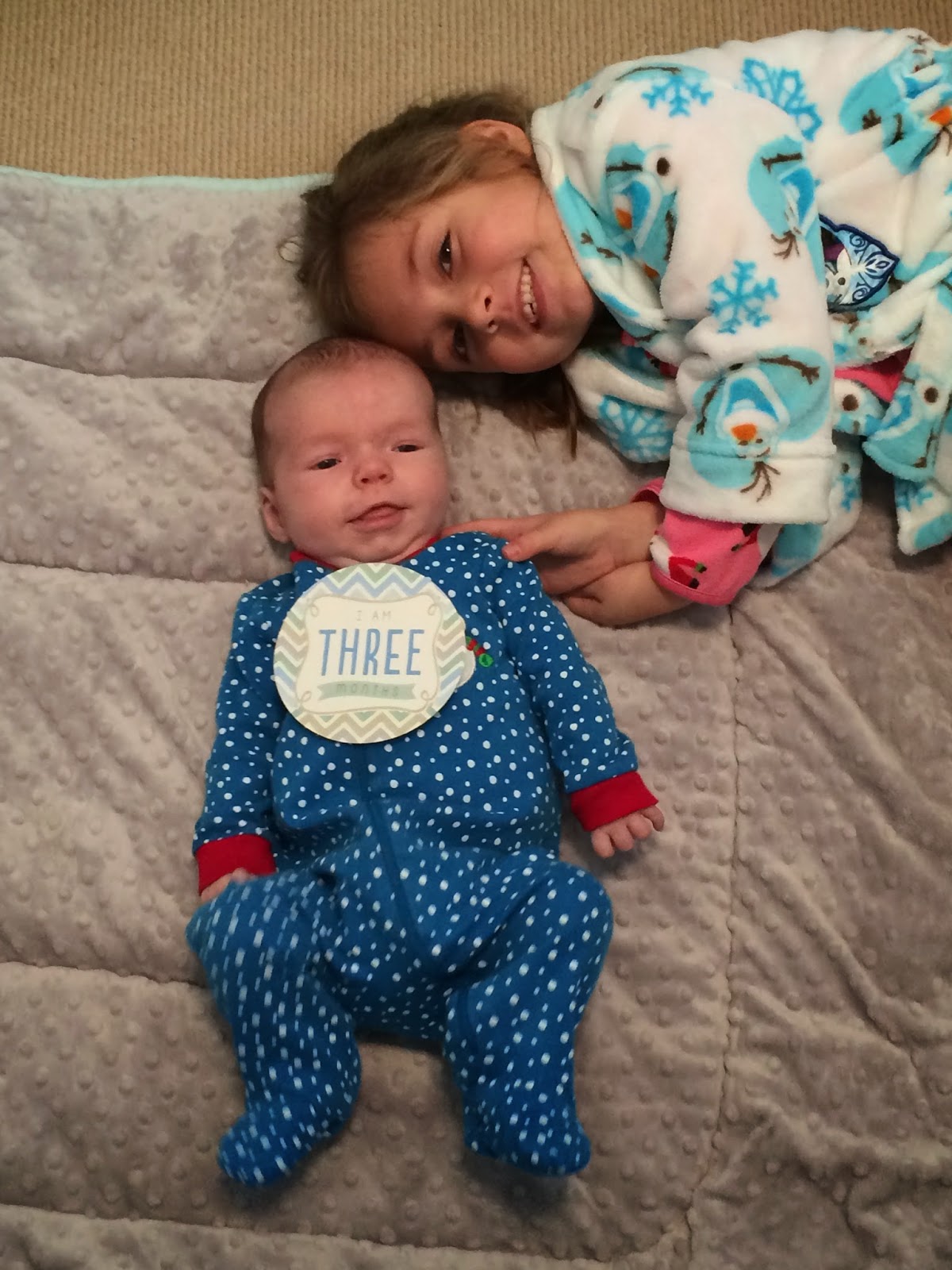 He's been in daycare for about 4 weeks now.  He has done really well and they have been great with me!  I has several half days of clinic.  On those days, I go feed him at least once to decrease the amount of pumping I have to do.  Then I leave him and go finish errands or go to the gym.  He has, unfortunately, gotten his first cold.  It started on Christmas Eve Eve night and is still giving him fits.  He doesn't sleep well at night right now, which keeps us up, too.  He keeps smiling during the day and is still eating well but I can tell he doesn't feel well. 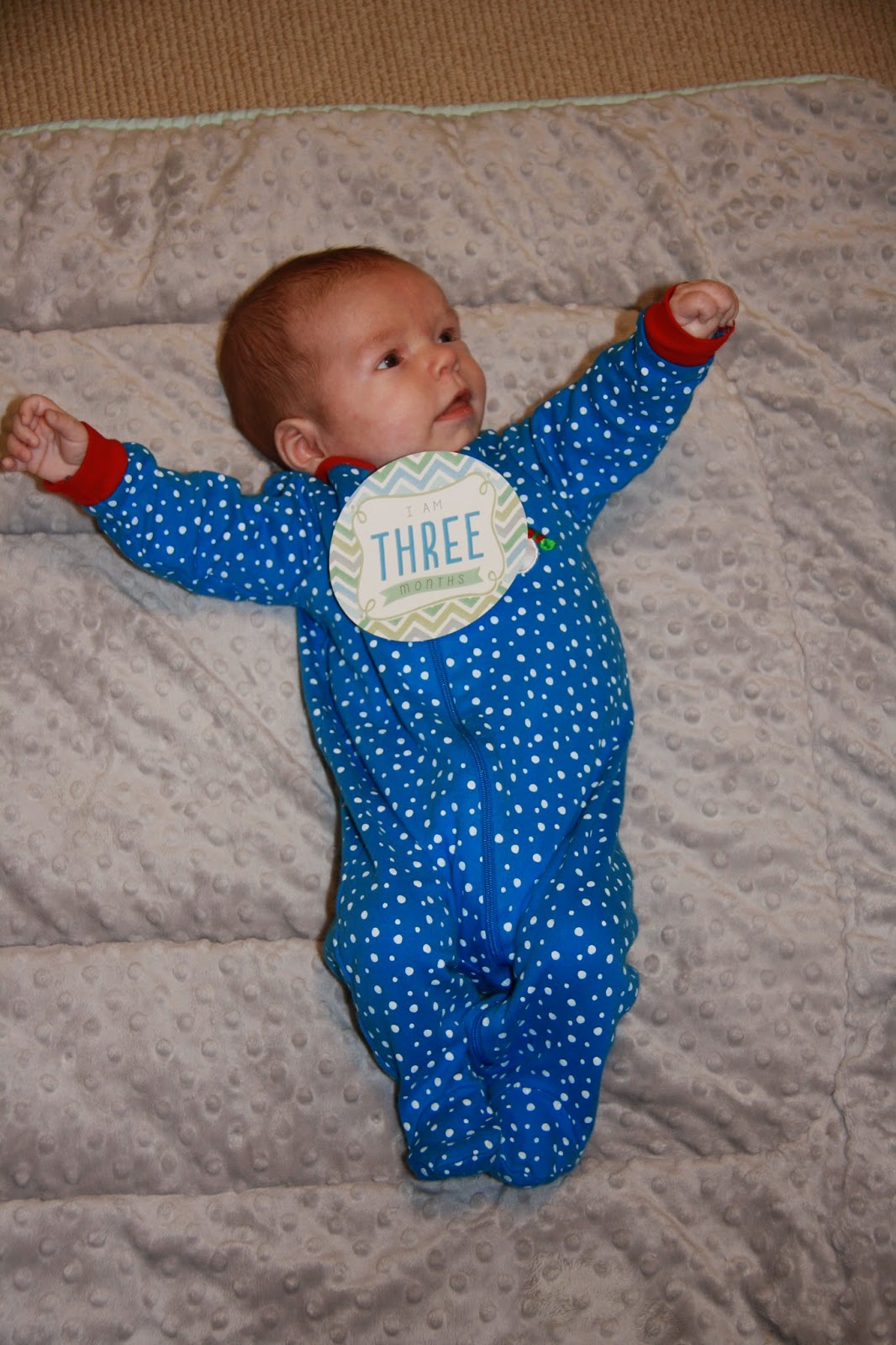 He is definitely growing as he's getting more meat on his little thighs and definitely has a bit of a belly but he's still long and lean.  Guess that's what breastfeeding will do.  He has still only had mommy's milk and definitely loves to eat.  Sometimes that makes him smile, too!  :-) 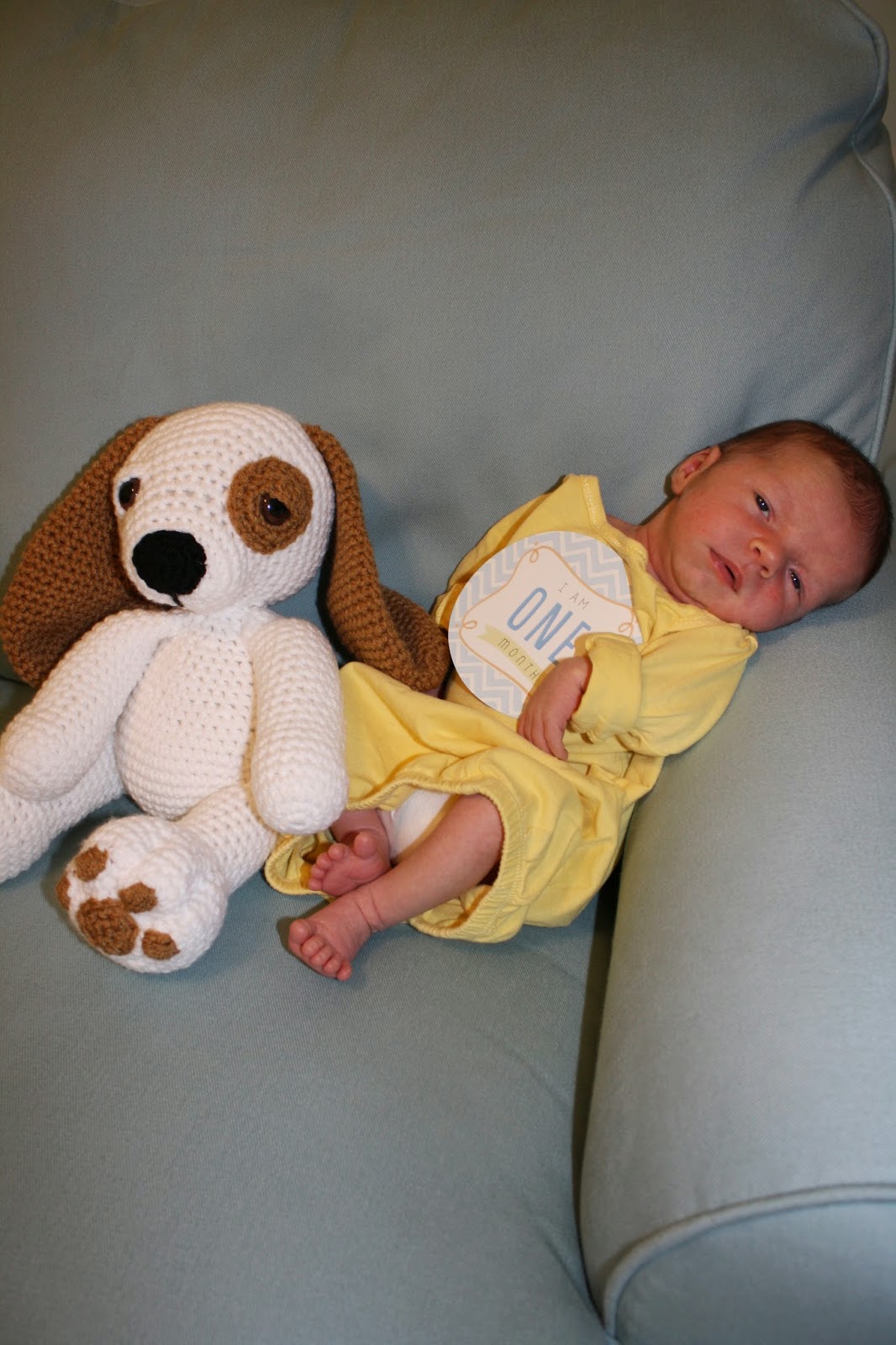 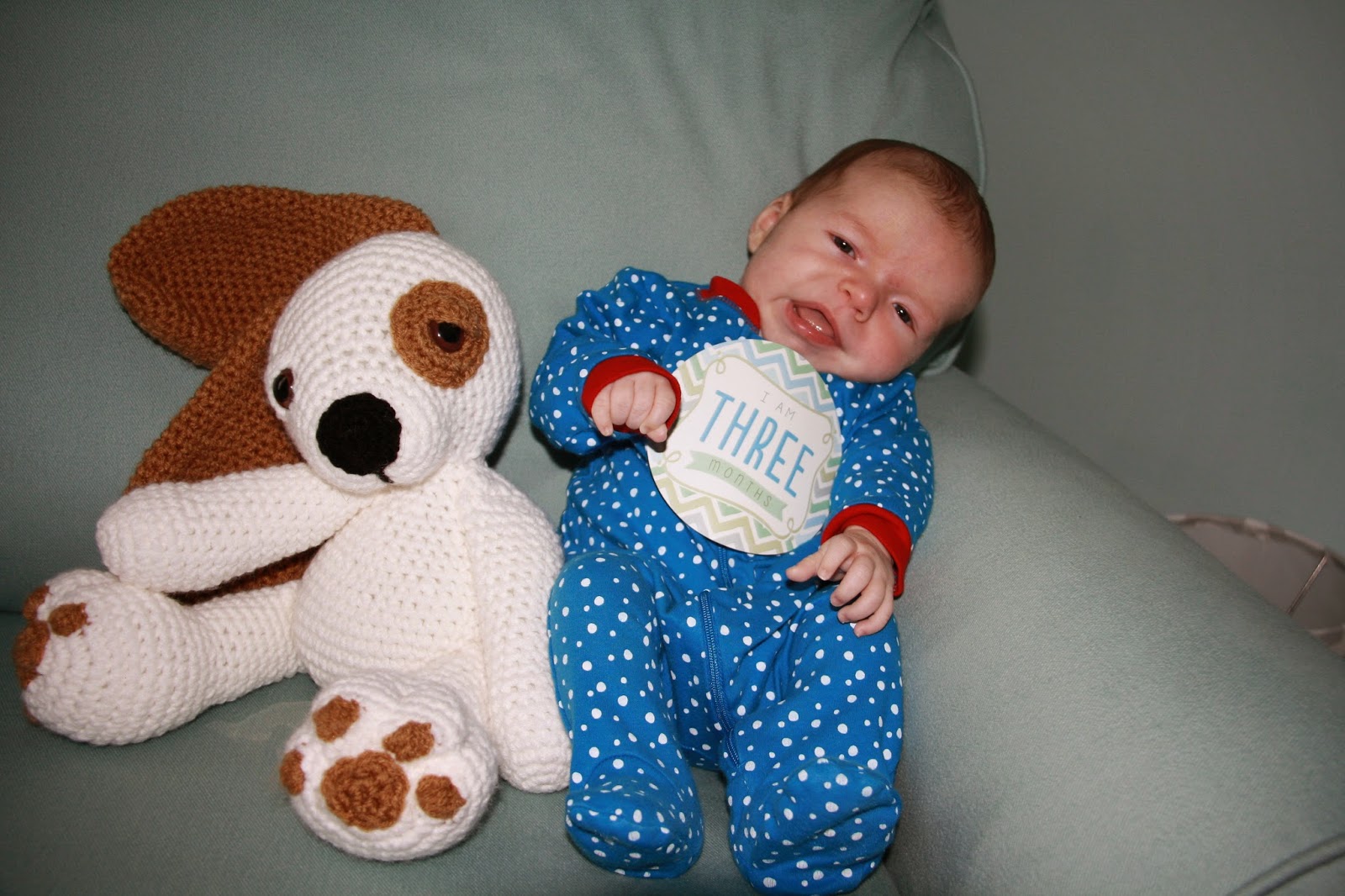 He has found his hands and loves to watch them. In the past few days, he's actually started grabbing onto things and watching them as he moves them.  I think he knows that he is doing it. 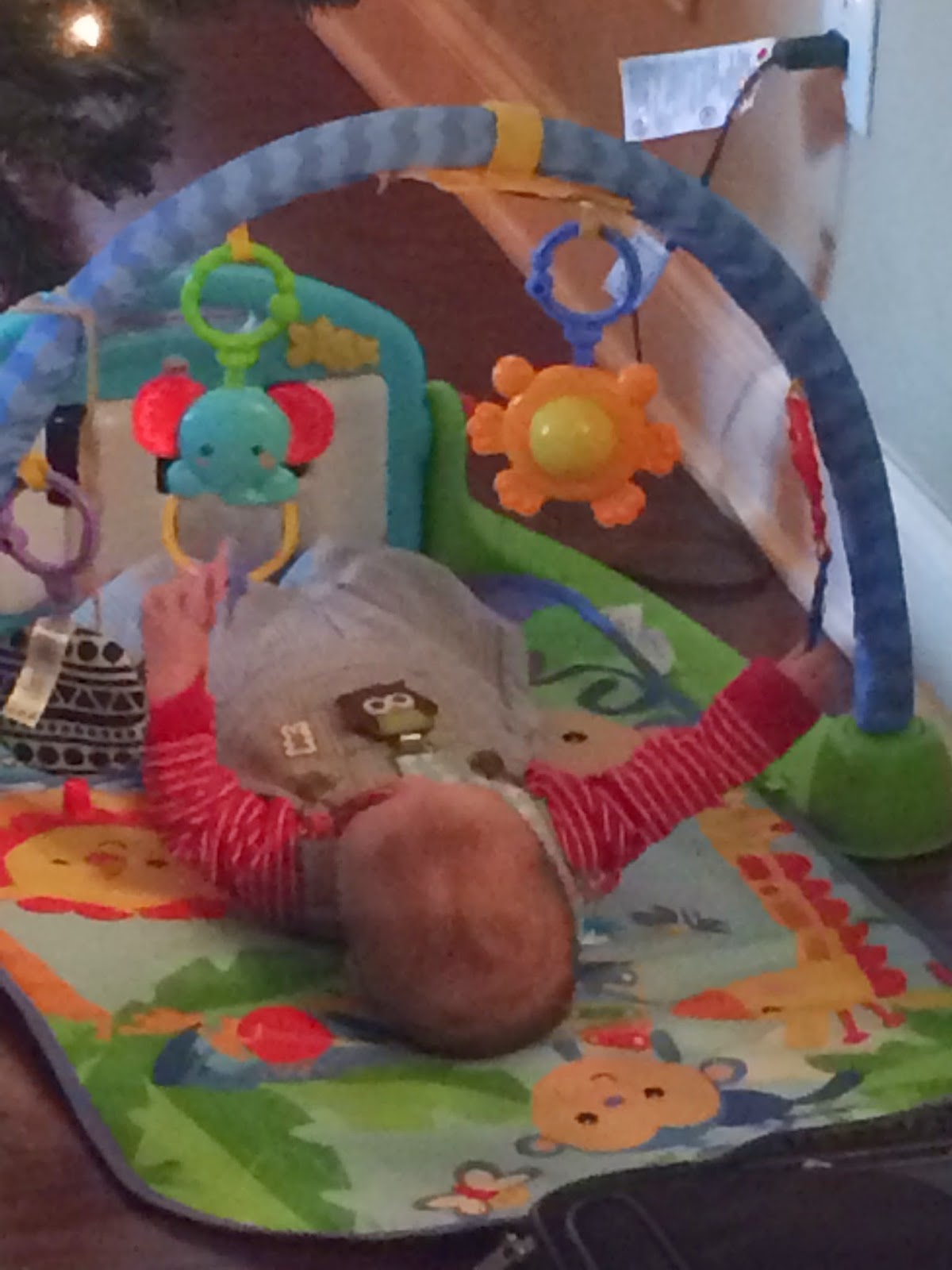 He loves to kick and will watch his little feet move like he's thinking "I'm doing this!"  The other day, my dad was grabbing his toes every time the swing would come forward.  Caleb started lifting his foot up to my dad's hand each time.  He's so smart! 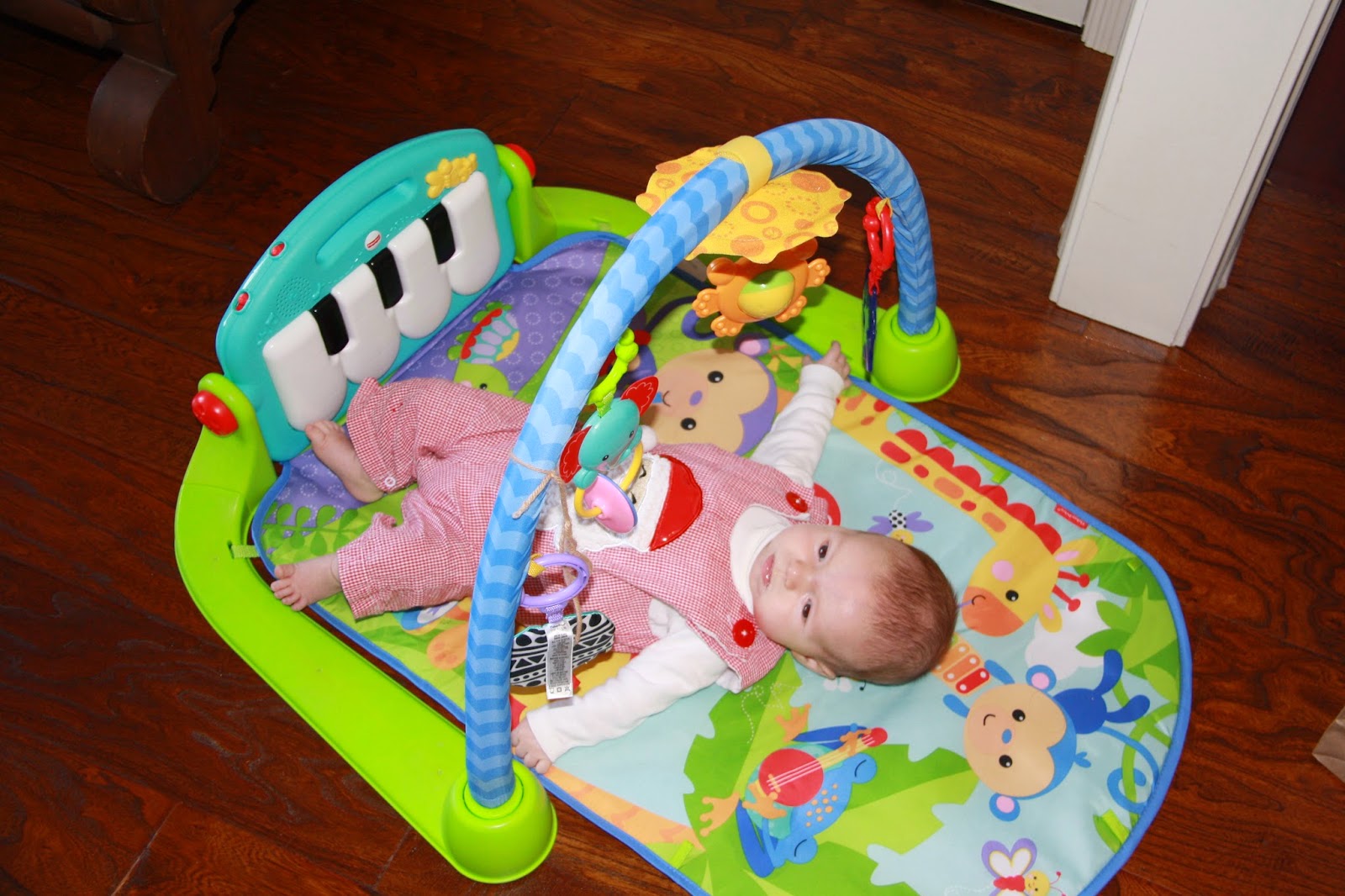 He still doesn't like tummy time very much but does it a lot better than he used to.  He can now get his head up all the way and will look side to side.  He loves his piano playmat and will lie there looking at his toys, kicking the piano keyboard, and grabbing the toys for nearly an hour.  He is SO close to rolling over from back to front. 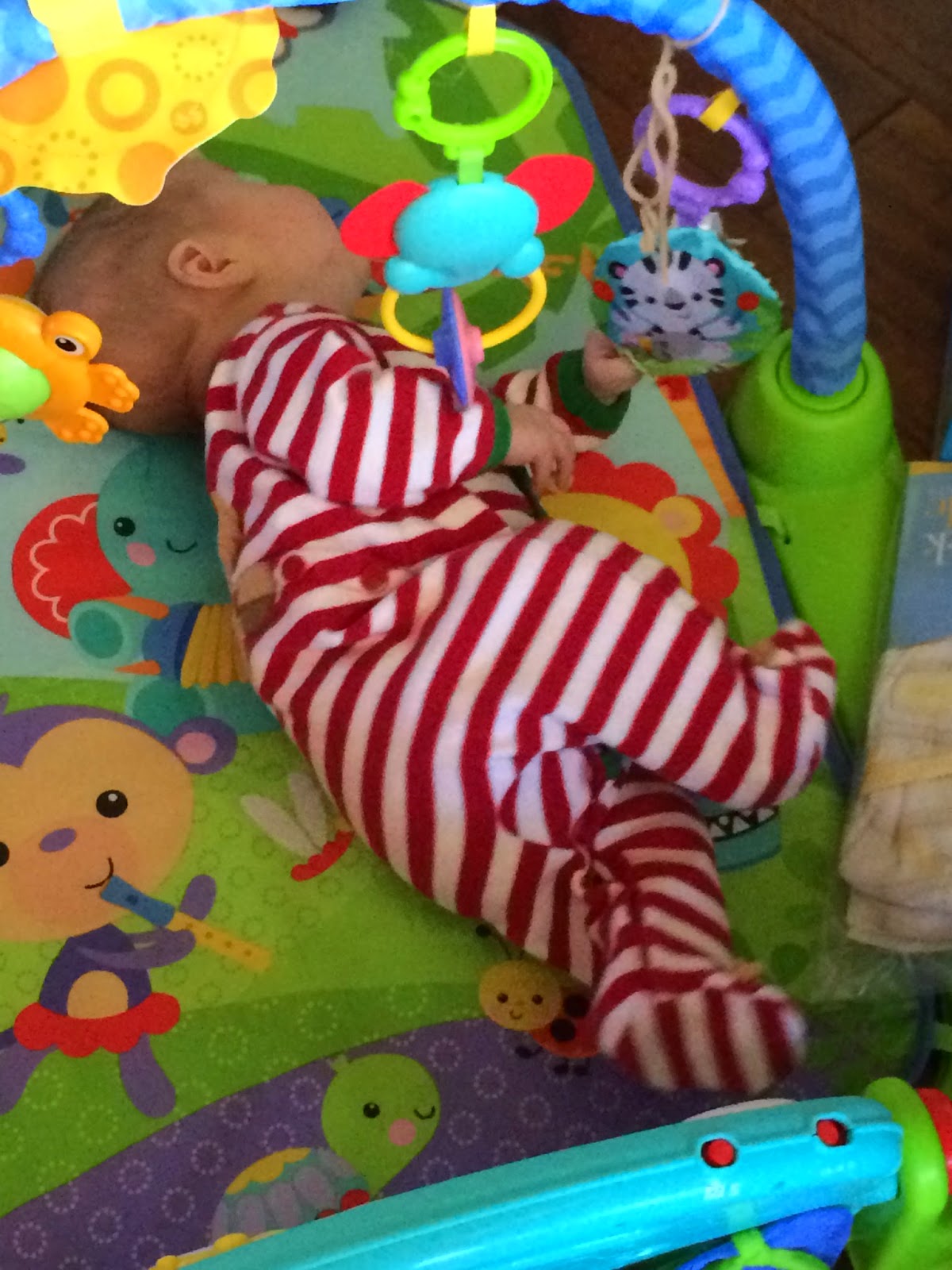 He tried for probably 10 minutes on Christmas Day.  I got several videos.  In the beginning he was doing it quietly, then he got quite vocal about it.  He never could quite get that shoulder under him but he sure did have those legs going.

As you can see, he is quite vocal and he likes for someone to talk to him.  He has the sweetest coos but will also make lots of grunts and growls completely appropriate for a boy!  And I will say...he is ALL boy! 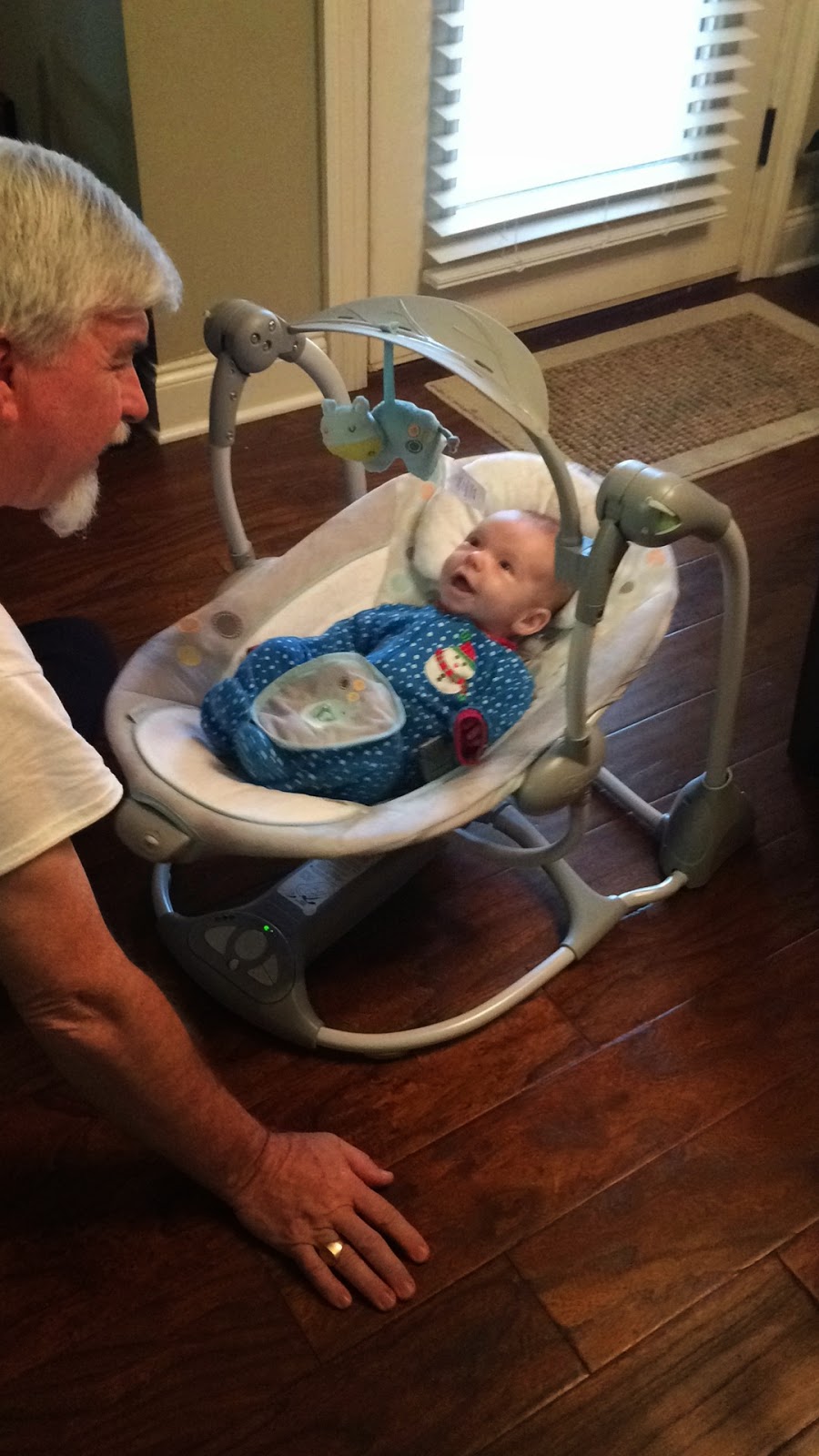 By estimates he is now 12 pounds.  He still wears 0-3 month clothes but is about to be too long for some of them.  There are a few 3-6 month outfits he can wear.  He eats just mommy's milk but is able to take a bottle well at daycare.  He is still waking up once a night, usually around 3am, to eat (though these past two nights he's been up 3-4 times due to his cold, poor baby!). 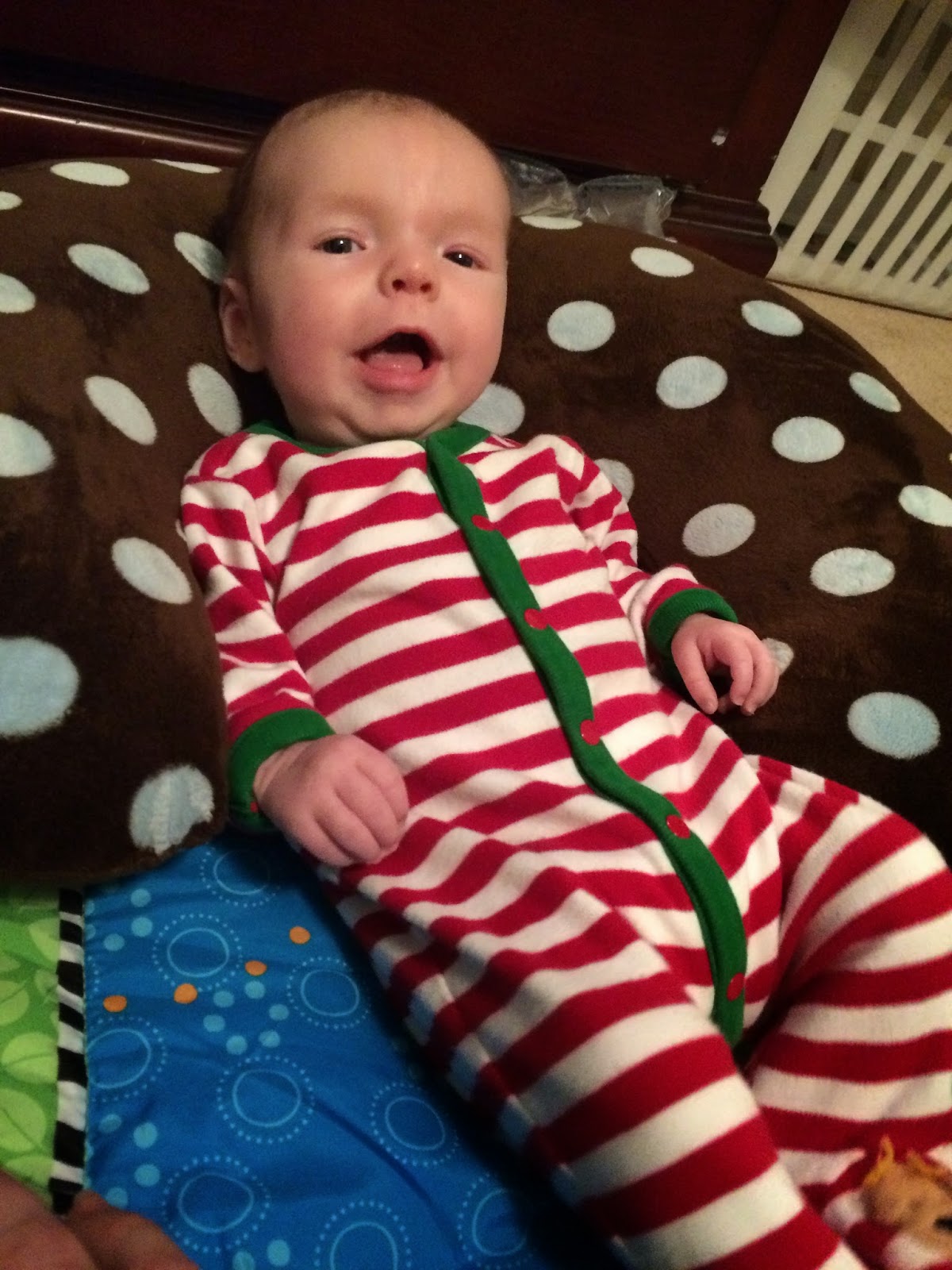 I can't wait to see what the next month brings!
Posted by Unknown at 6:29 PM No comments:

This is just the front of the card.  To see the whole this (which includes a baby announcement!), clinic here!
http://share.shutterfly.com/action/welcome?sid=0AaOGbJu0bN2bxw
Posted by Unknown at 9:56 PM No comments:

How is my baby already two months old?!  How am I already back at work (for a whole week)?!  Time is moving so quickly!  Caleb turned 2  months old on Thanksgiving day, which I thought was fun.  We were with our families then and got to share Caleb with them. 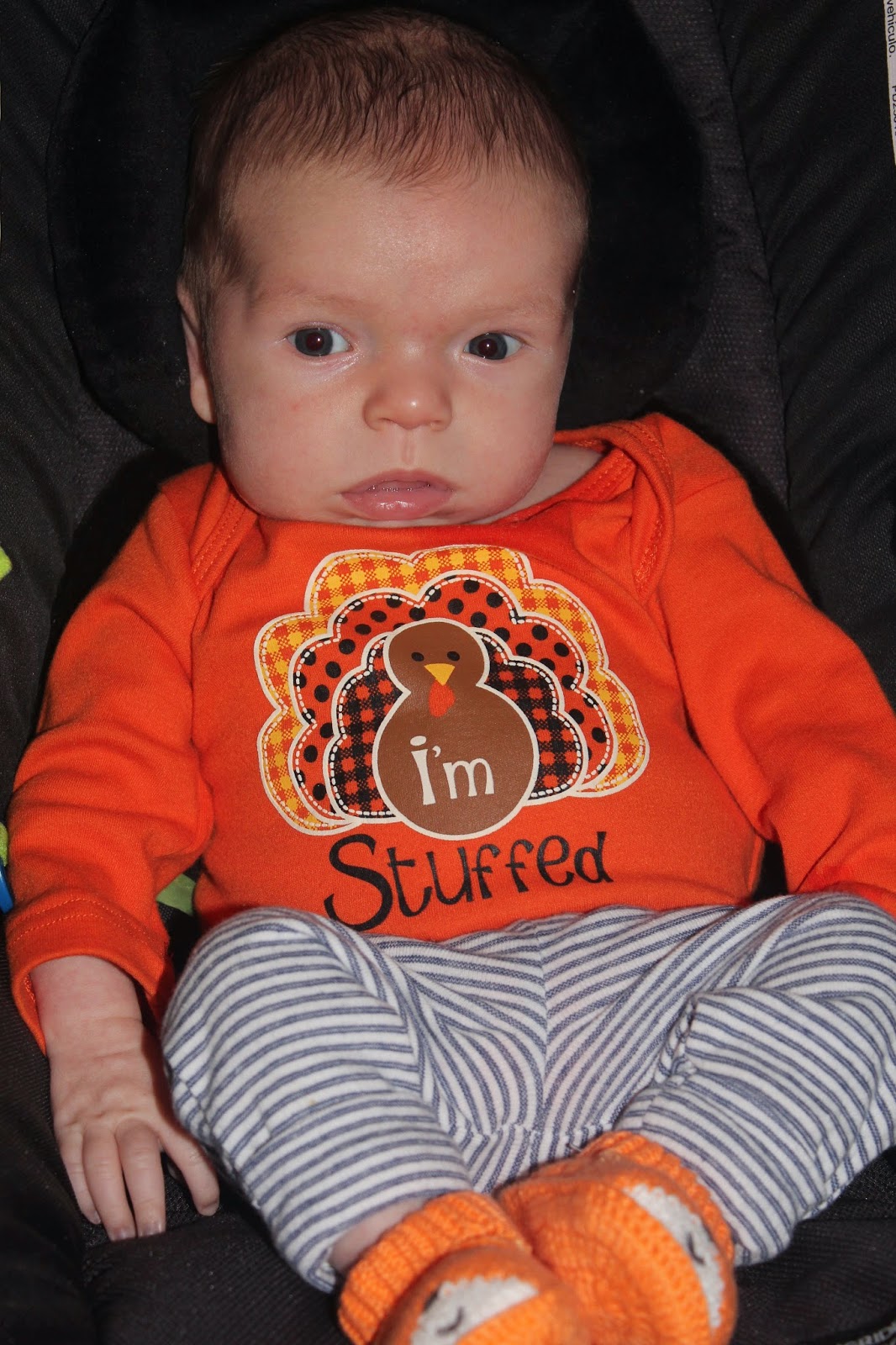 There are so many things he's started to do.  Around five weeks old he started smiling, and he will now flash a huge grin when he sees mama, daddy or hears sister.  There are times I even think he's laughing! 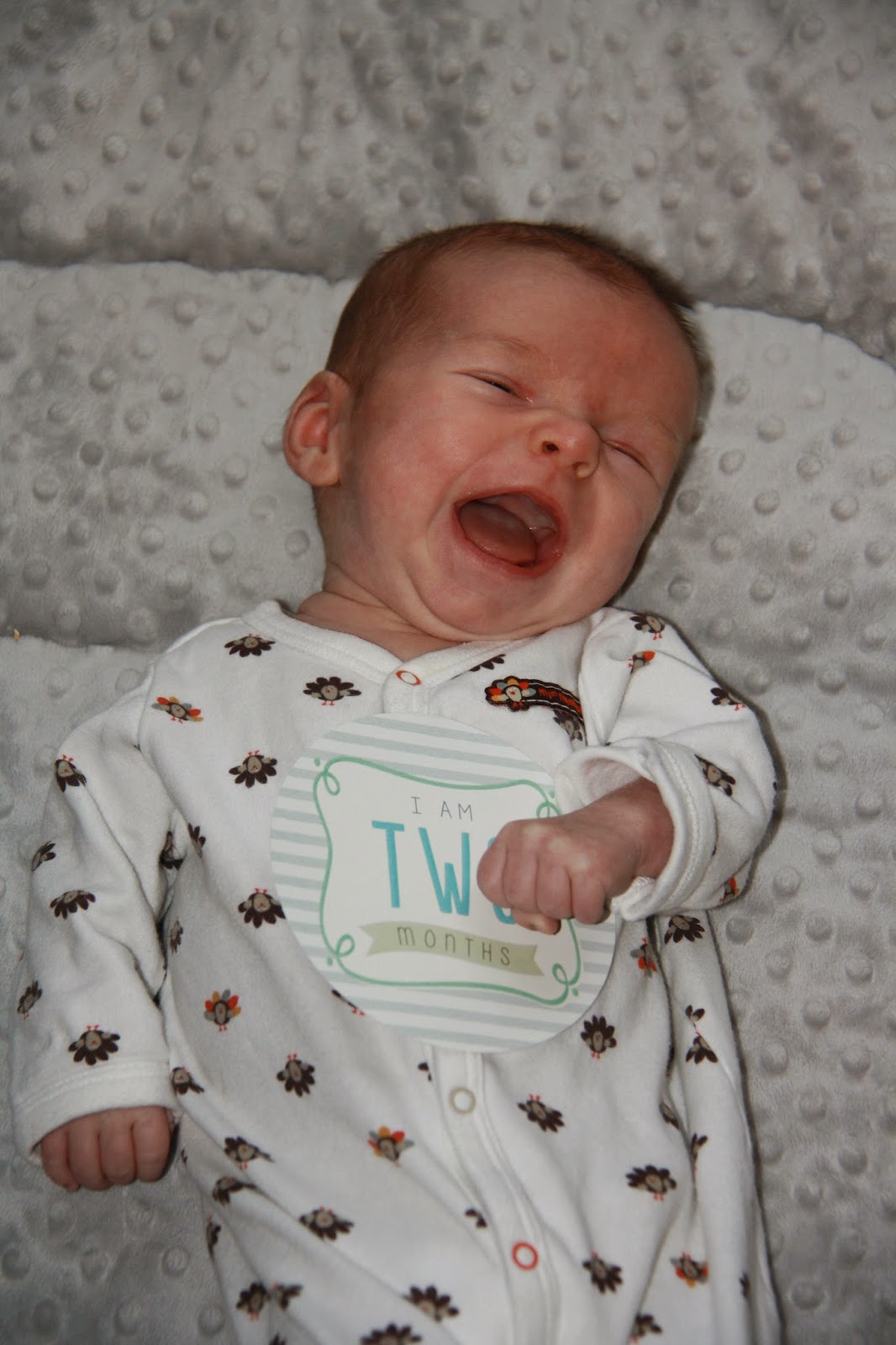 He loves his car mirror and piano mat at playtime.  He's a big fan of lights and will stare and talk to them for a good while. And he still loves walks.  He's not a fan of tummy time or burping.  So far he is indifferent to baths but no longer screams. 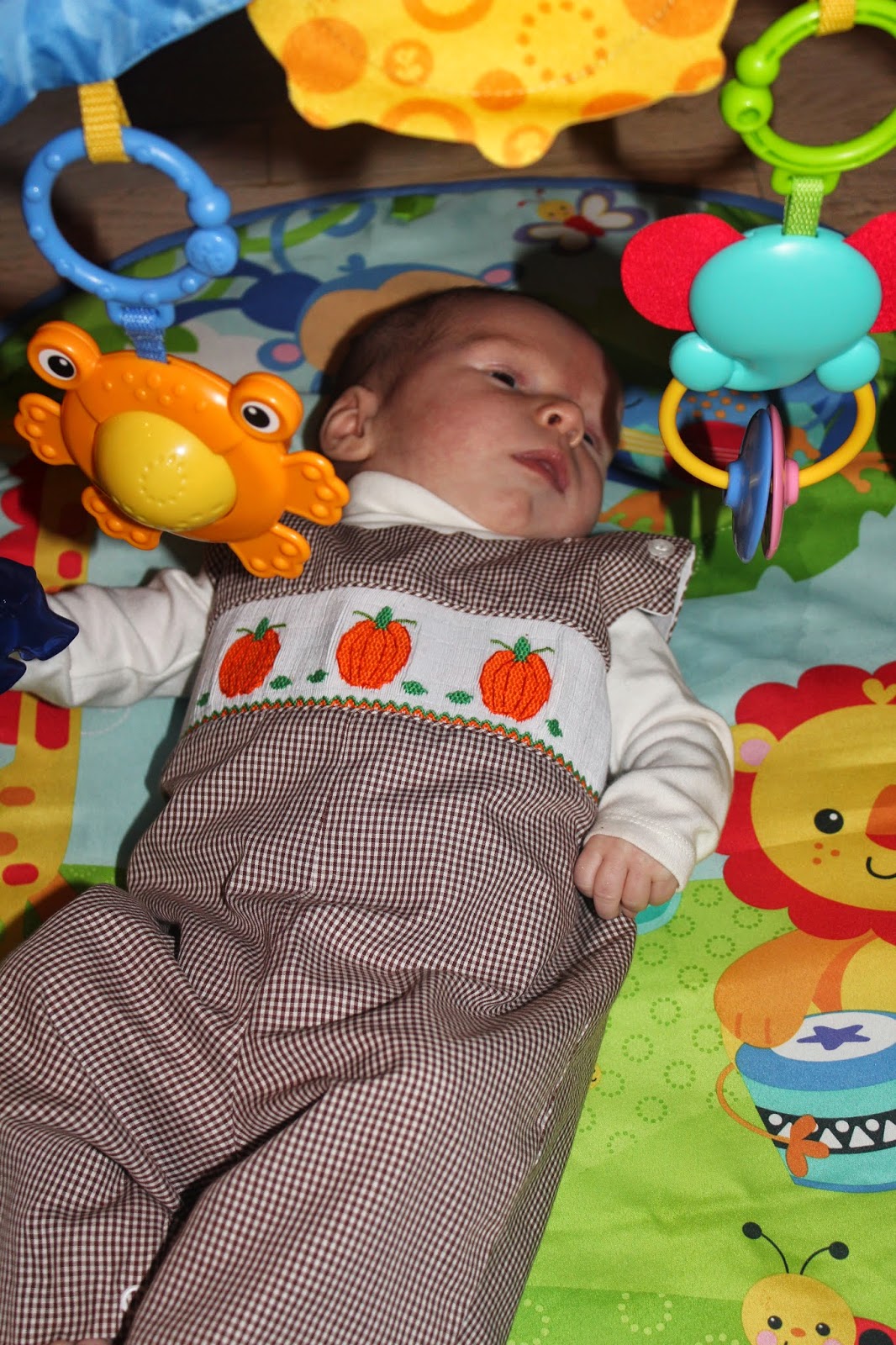 We started swaddling him at night and, apparently, I should swaddle him for naps, too.  I have had little success getting him to nap at home but he does so like a champ at daycare.  He usually sleeps from about 8-9 until 230-330, when he still wakes to feed.  This past week he has been waking u at 5am (about an hour and a half sooner than before).  I'm not quite sure I can handle that long term! 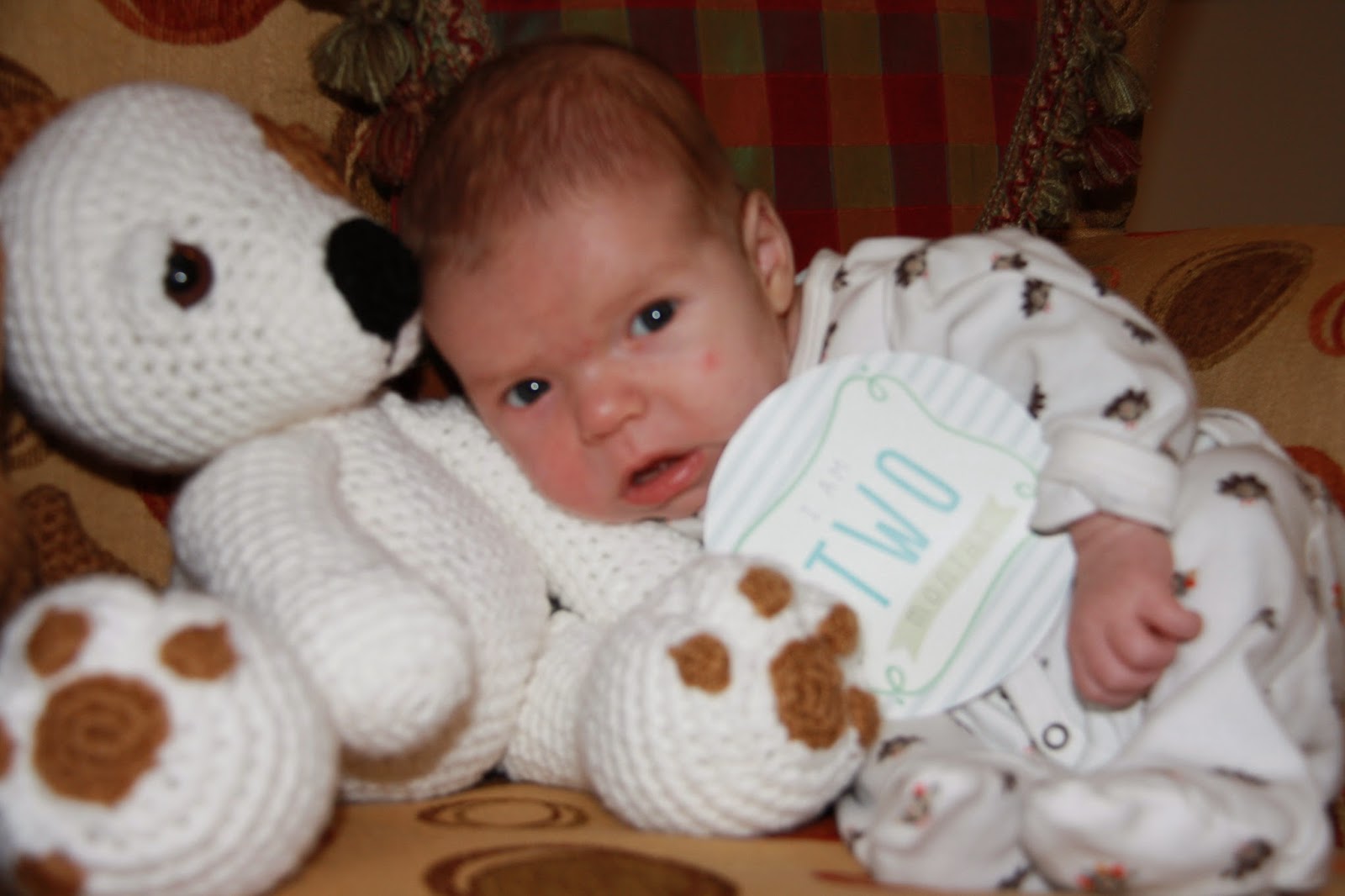 At his last doctor visit, he weighed 10 pounds 3ounces (15%) and was 22.5 inches long (45%).  His head is 75%.  He also got his shots.  That was hard on him and this mama!  Despite being a pediatrician, when it's your child, all is different.  When she stuck the first needle in his leg he just let out this awful scream.  My eyes filled with tears and throat got tight..."this hurts my baby" I thought!  BUT it is what he needs!  He was so tired the rest of the day, taking two long naps.  Then he woke up screaming and wouldn't soothe.  He would eat for a few seconds then suddenly scream.  I was so sad and cried myself because I couldn't hel him.  Finally he calmed down and was my happy baby later that night. 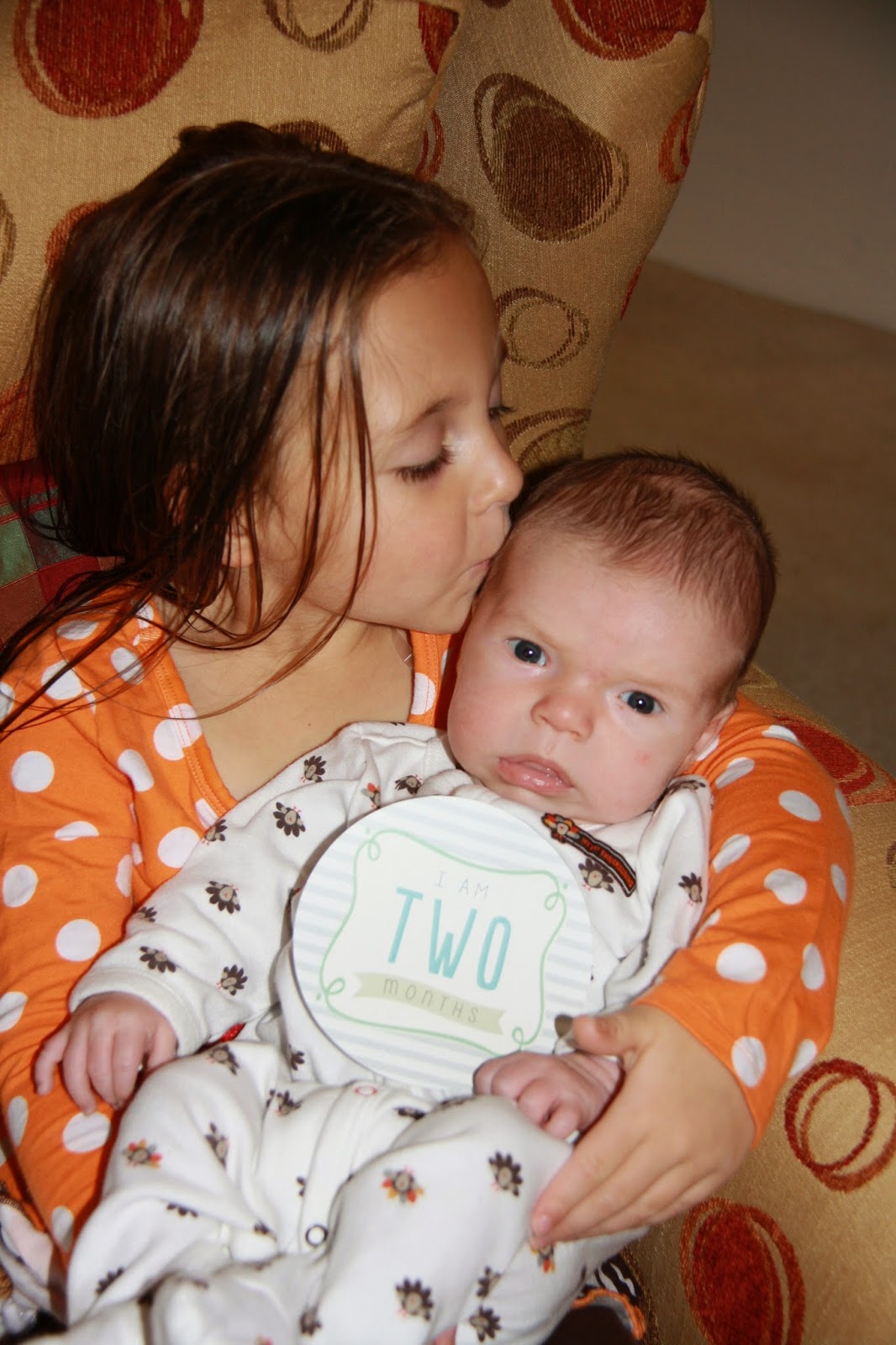 We are still breastfeeding.  I pump milk for him to have while I'm at work.  Let me tell you, pumping is hard!!!  We do so much better breastfeeding.  So far, I'm keeping up with him.  I'm hoping things will improve the more I pump.  I figure, he's growing well, no need to change anything. 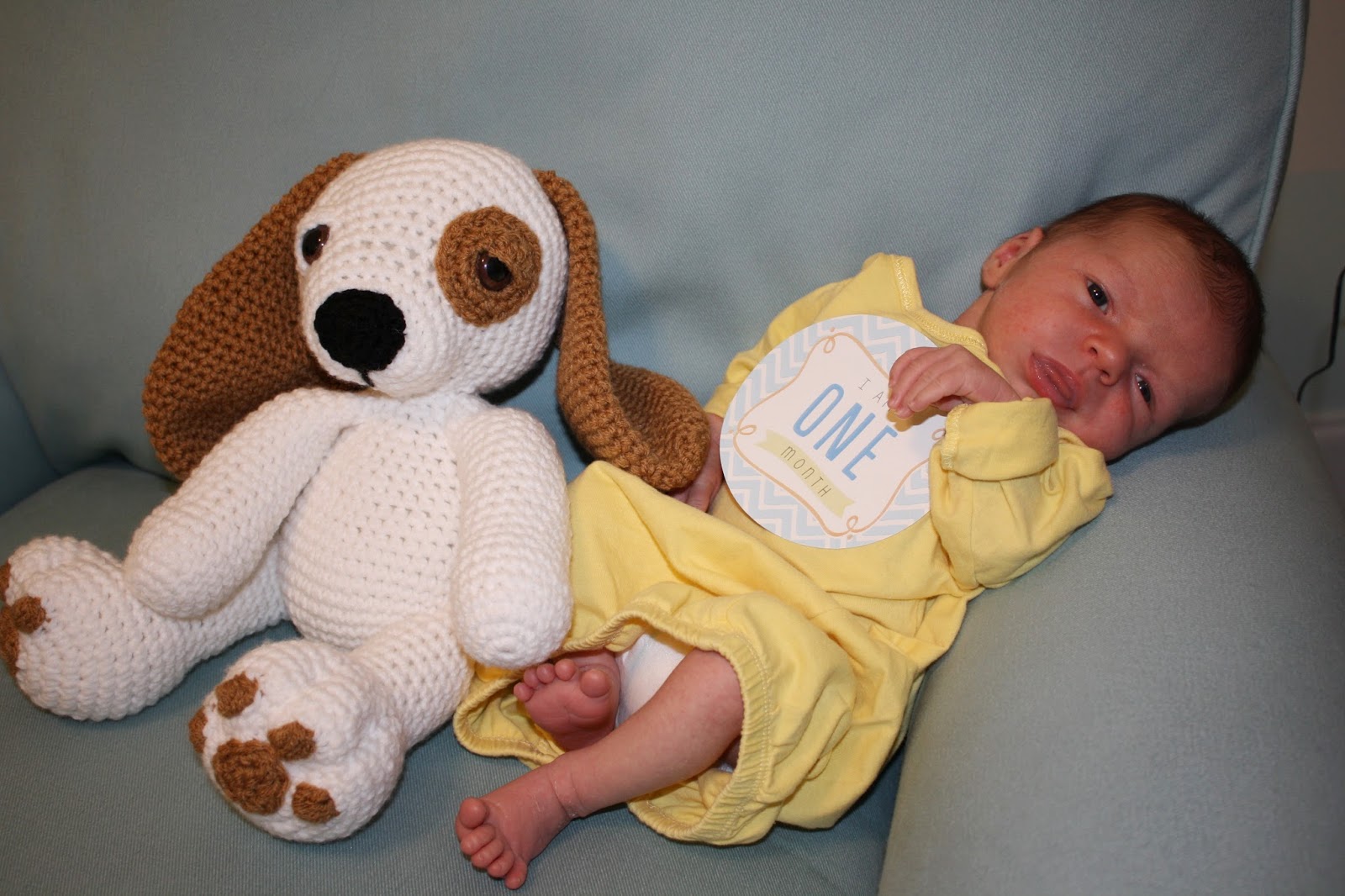 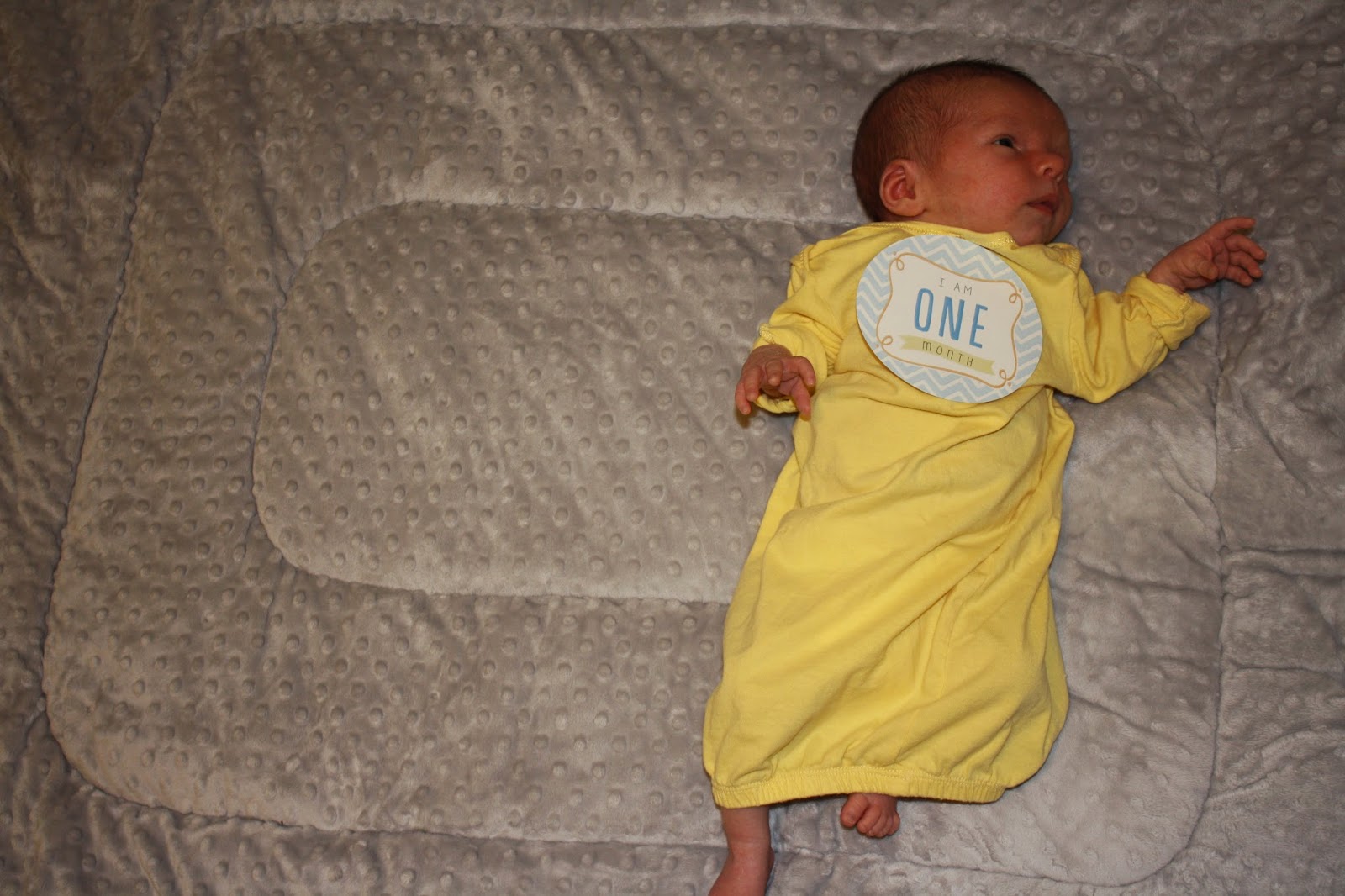 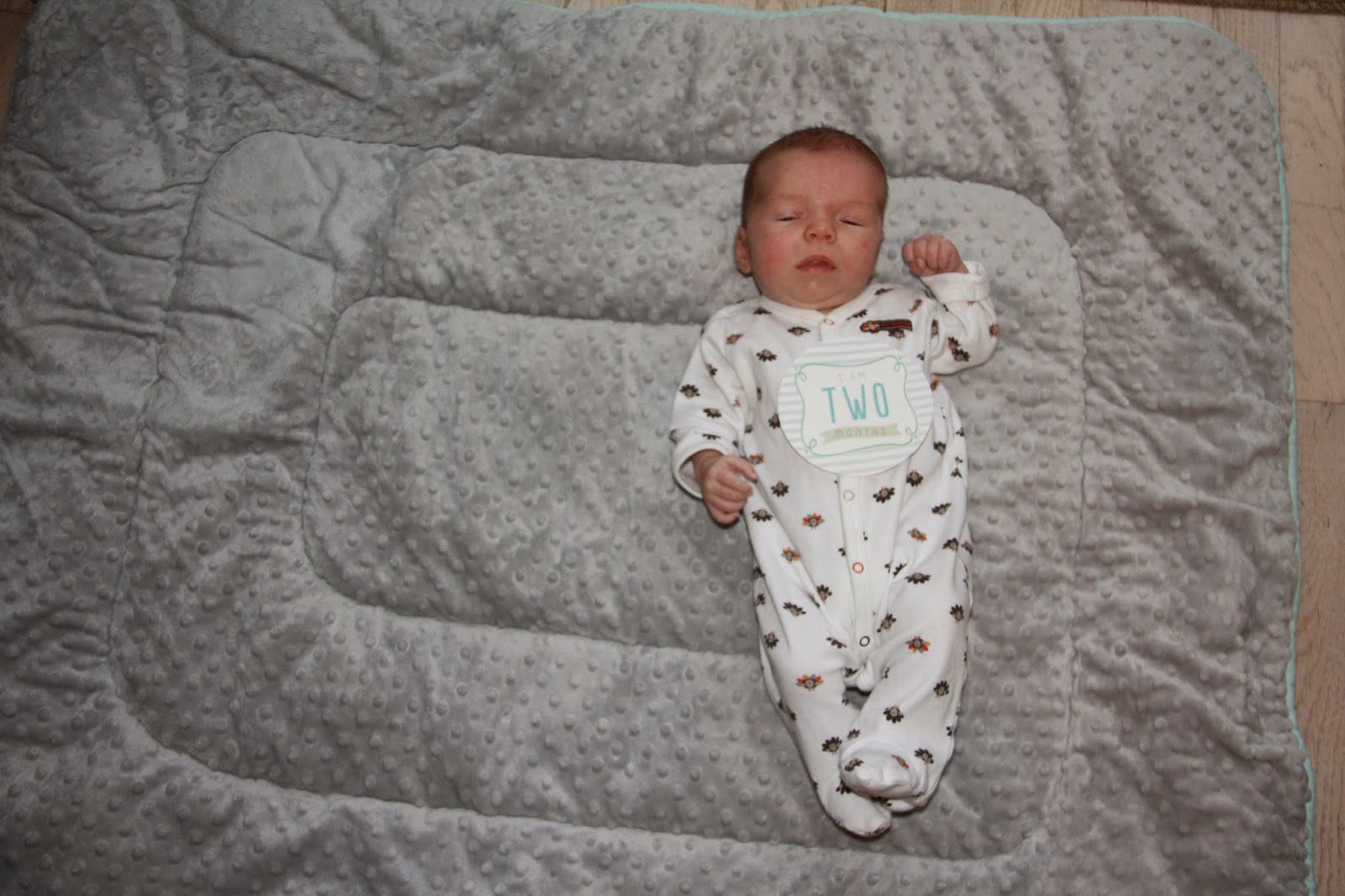 Definitely growing!  He's longer and has chunkier cheeks!  He's getting better at using his hands...he's actually started batting at the hanging toys on his playmat.  He's also started finding his hands and tries to put his thumb in his mouth.  oops!

Caleb, what a blessing you and your sister are to us.  She loves you, if you can't tell!  Thank you for your smiles, your cuddles, and your trust.  I will try to give you what you need.  I will try to be patient and wise but promise to love you always!!!  I ray that as you watch me, you learn what to look for in a wife and that as you watch your daddy you learn how to be a godly and loving husband.  We love you and are enjoying watching you grow! 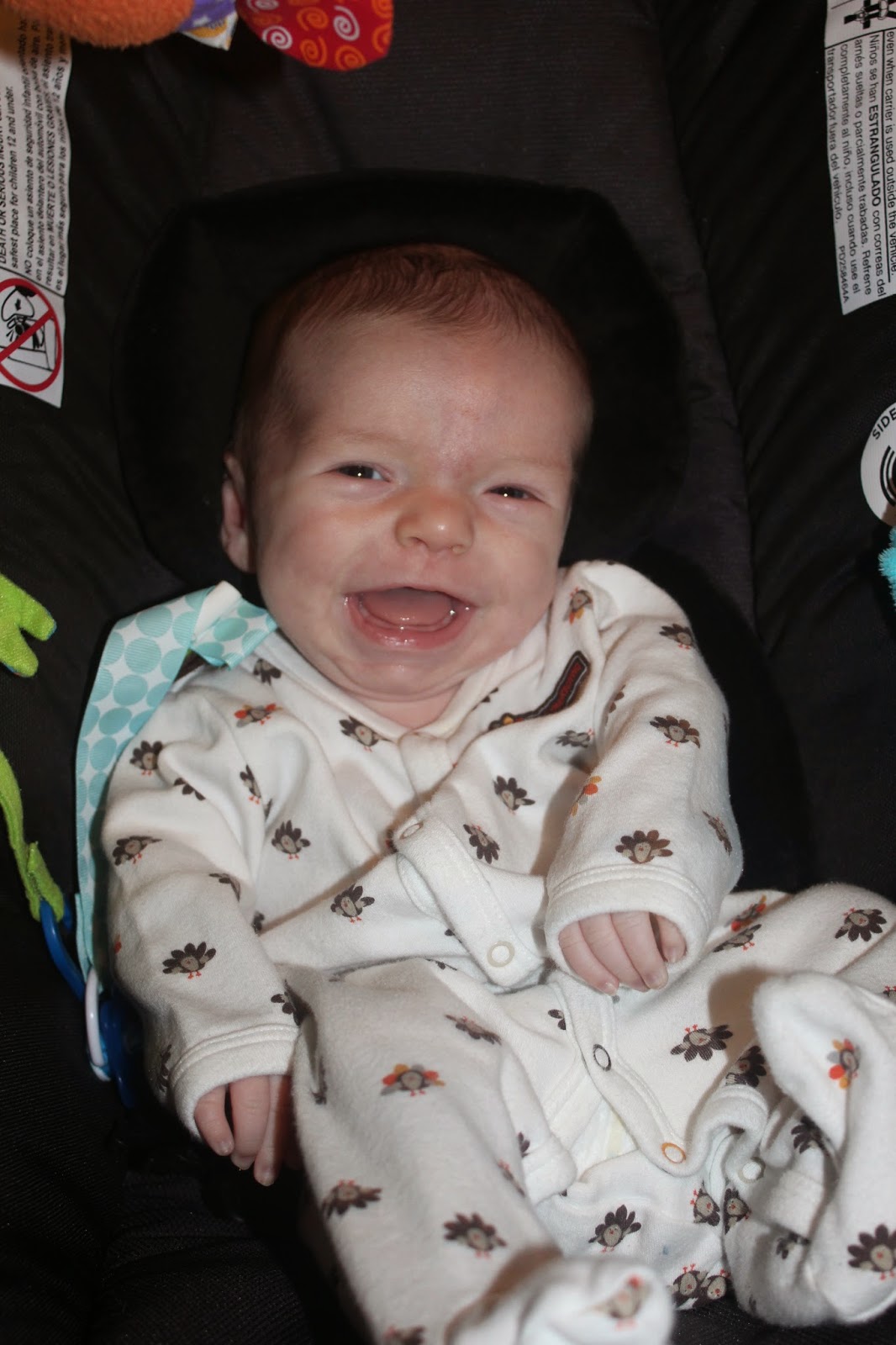