We've been doing lots of baking around here, so I have a lot of posts to put together.  K and I usually bake at least one thing a week that is gluten free for David.  Sometimes, I just have to do something "regular" because I get tired to feeling like I have to do something special for the gluten free aspect.  Somehow, I was very productive 2 weeks ago and got blog posts set up ahead of time; thus, the full WEEK of posts.  I will try to be more consistent with that.  But I've been doing more baking than that.  I've actually been baking every day!  It's the best baking I've done so far.  Here is K's announcement:

We're expecting a baby!  The baby is due on September 25 and am 13 weeks along now.  I found out at about 5 weeks and then had to wait 4 LONG weeks until I went to my doctor.  It seemed like forever.  Then we got to see that sweet little baby. 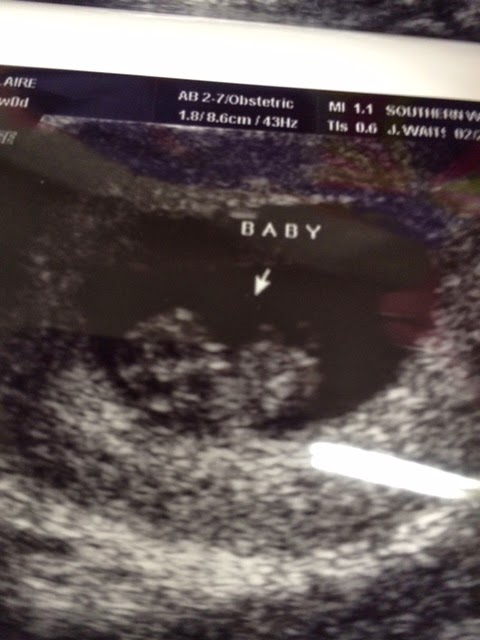 I started giggle-crying when I saw it on the monitor.  The baby even wiggled a little for us. :-)  That weekend we went to see my parents for Daddy's birthday.  We waited until the end to tell them.  Then we told David's parents.  But everyone was sworn to secrecy.  Four LONG weeks after that I had another doctor's appointment.  Heart rate looked great at 160-170.  So far I've felt really good.  I haven't really had any sickness.  I've just felt tired and actually took some 2-3 hour naps...and I do NOT nap!  I have also gotten used to a bedtime snack, which I'm trying not to get too used to but you gotta do what you gotta do.  :-) I haven't taken a pictures besides this one on my phone.  I'll try to get better about that.
Posted by Unknown at 5:50 PM

Yay! So excited for you!