After the past few Daring Baker challenges have been bread, it was kind of nice to have one that I didn't have to modify for David to be able to eat.  However, I wasn't sure if it would be his "cup of tea."  The March 2014 Daring Bakers' challenge was hosted by Rebecca of BakeNQuilt. She challenged us to learn to make classic nougat and to make it our own with our choice of flavors and add-ins.  This month just sped by.  We had K back for two weeks then she went off to see grandparents (the other side this time!) again.  Then when she came back we had an exciting announcement and all of a sudden it was this week and the challenge was due!  Yikes.  Thankfully, despite being a little involved and requiring attention, it was quick.  I decided to do a peanut butter version. 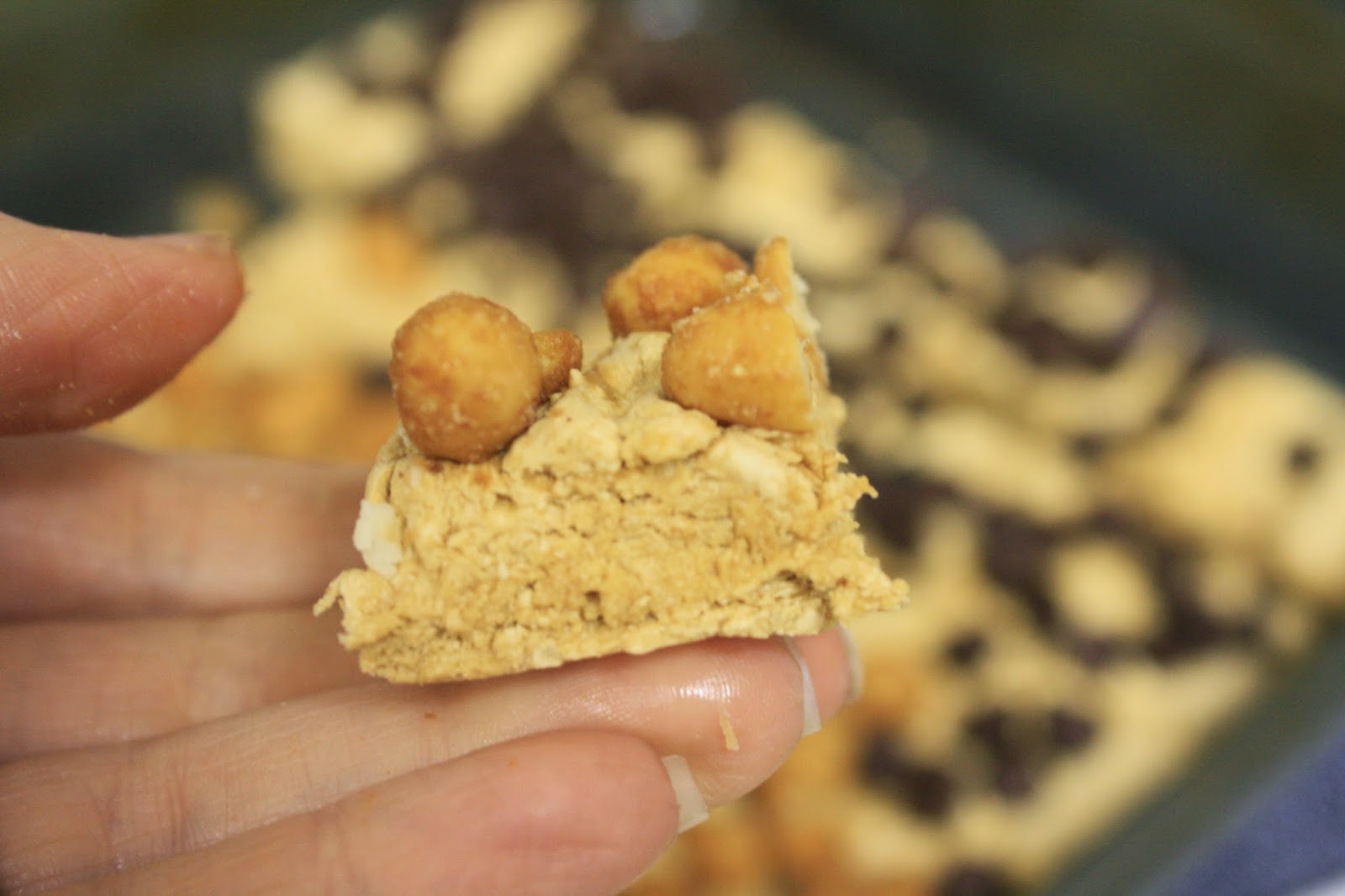 You see, I LOVE Payday bars.  So, I found a peanut butter nougat recipe and then added honey roasted peanuts to the top of half and chocolate chips (for my sweet love!) to the other half.  David said it tasted like Snickers, which would make sense as Snickers is chocolate, peanut, and nougat! 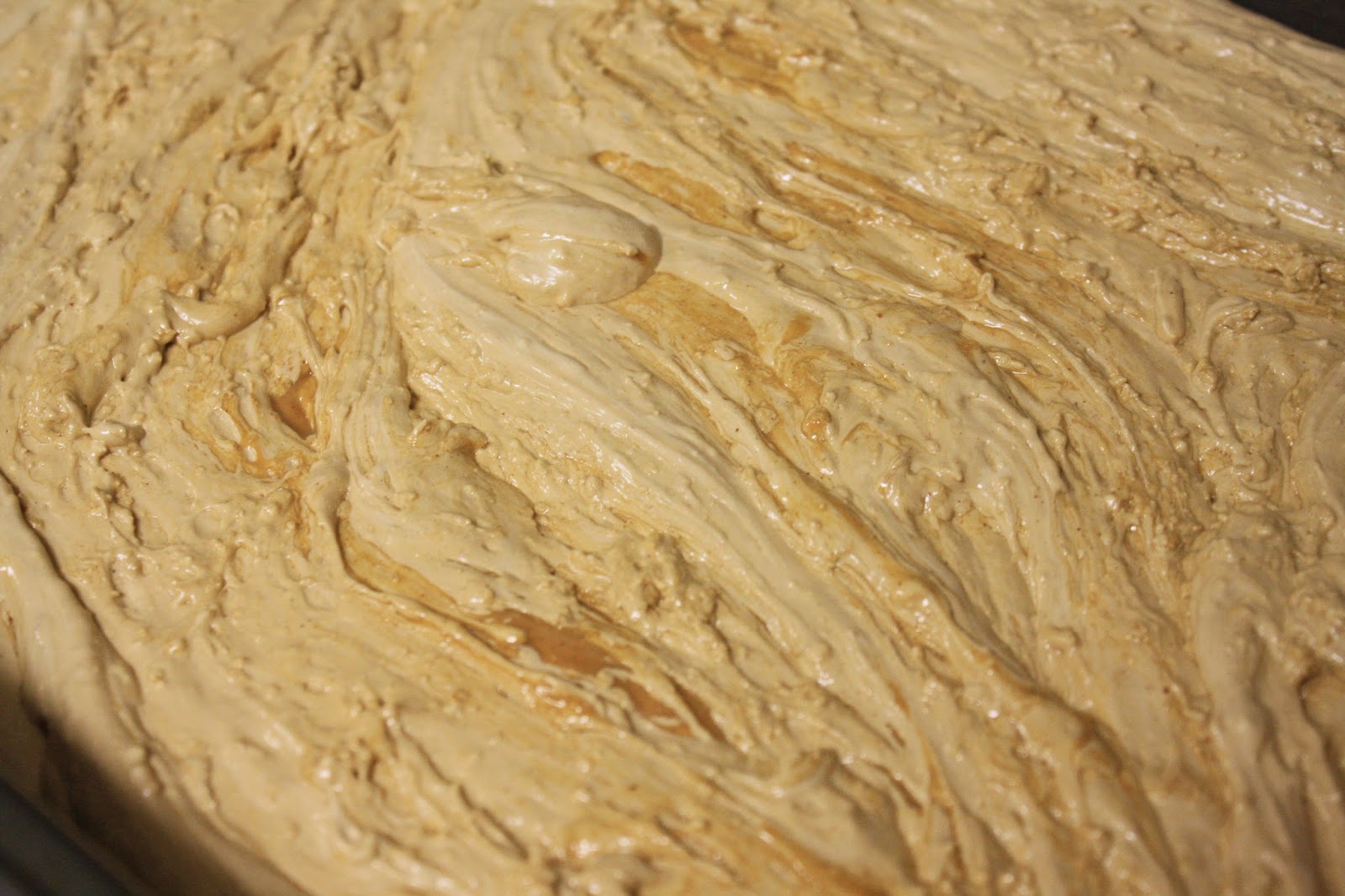 I took some to my office today and they were GONE in about 5 minutes...with many requests for the recipe.  I'd say this challenge was a success! And thought it was simple, I probably would have used a "cheaters" version otherwise.  So, thanks, Rebecca, for this fun challenge! 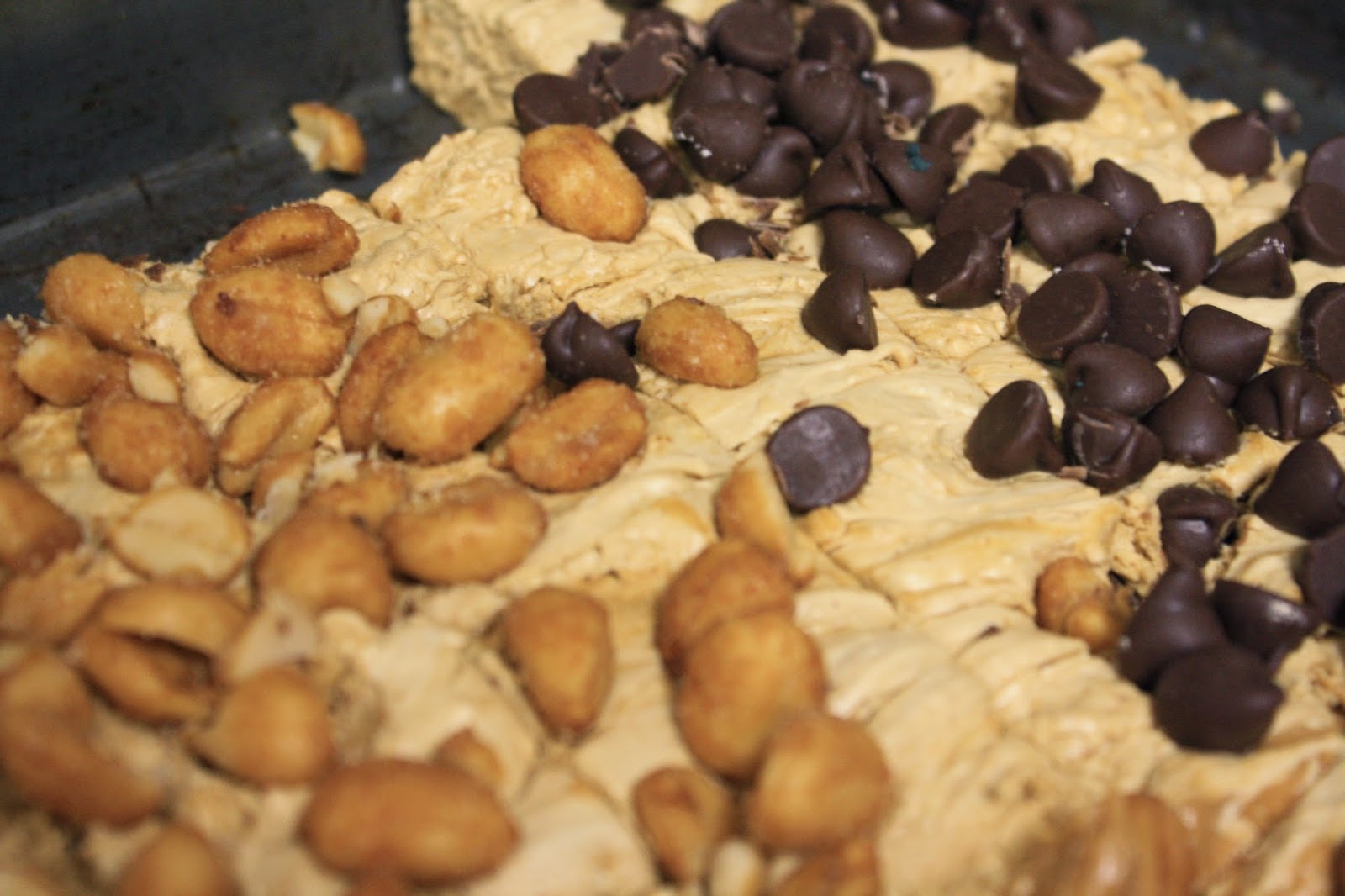 Coat1 9x13-inch pan with cooking spray and set aside.

In a large bowl (or the bowl of your stand mixer), combine egg white, corn syrup and vanilla and set aside.

In a 4 quart pot, combine sugar, water, corn syrup and molasses.  Stir to combine and place over medium heat.  Place the lid over and bring to a boil.  Allow the sugar syrup to boil for 2 minutes then remove the lid.  Now, place candy thermometer in the mixture and clip on the side of the pot.  Watch your syrup and once it reaches 233 F, begin whipping the egg white.  Whip until shiny and fluffy.  This will whip much faster than you think, so you really don't have to start whipping until this temperature.

Once the syrup reaches 255 F, remove from the heat and slowly pour into the meringue mixture as you continue to whip.  Be sure to pour in an even stream, into the meringue.  Do not pour it onto the side of the bowl or onto the whip, aim right for the meringue!

When you have added all of the syrup, continue whipping for an additional 2 minutes.  Mix powdered milk and powdered sugar together in a bowl and add to the whipped stuff.  Fold in with a rubber spatula.  Add peanut butter and mix in with your rubber spatula.  It's hard to get mixed in evenly but just do your best and  try not to deflate the candy while stirring.

Pour candy into the prepared pan and allow to sit for 4 hours.  I put mine in the refrigerator and it was definitely too hard.  Just leave it out at room temperature.  If you need to leave it overnight be sure to cover with plastic wrap.  Once set, remove candy from the pan and cut into 1-inch squares.  Top with your desired toppings.  I used honey roasted peanuts and chocolate chips.  Enjoy!
Posted by Unknown at 8:23 PM

Yummy! I love peanut butter so I'll to try this version sometime. Thanks for trying the challenge this month!