...and no, that's not a typo! In July I decided that I wanted to try and make a vegetarian version of shepherd's pie...I guess that would make it a gardener's pie! So, I searched for recipes but didn't really find one I liked. I did notice, however, that most recipes used curry powder...which I tend to enjoy. So, I chopped up some veggies including eggplant, zucchini, squash (summer and pattypan), and onions. I sauteed these in my cute new PINK pan that I purchased at Kroger (ha!). 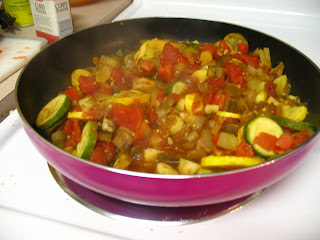 Then I added some seasonings along with curry powder. A few minutes later this weird, sweaty smell arose from my pan. What is it with curry that makes it smell like sweat? Hmmm...I still like the taste of it! One other thing I changed from the traditional shepherd's pie is substituting mashed cauliflower for the potatoes! I have mentioned in the past how much I love mashed cauliflower and I think it really worked for this dish. On top of the dish went Parmesan cheese and some sharp cheddar, which browned nicely. 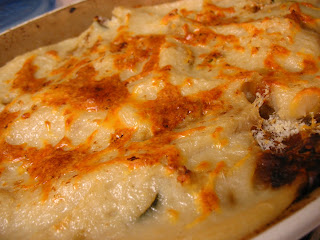 Now, to the taste...overall, I really enjoyed this. However, there was something not quite right...something, oh, sour! It drove me crazy for a while, then I determined that it was the pattypan squash. Every bite I had that contained this squash was a bit sour. I'm wondering if the squash I had just wasn't quite ripe, because I've had pattypan before and don't remember it being sour. I think this was a fun variation on a comfort food classic...try it out some time with your OWN variations! 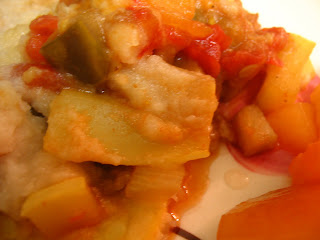 Prepare the cauliflower. In a large skillet sprayed with cooking spray, place eggplant, onions, and squashes. Saute until softened. Add seasoning and curry to taste. When softened more, add tomatoes and stir until heated through. In an oval baking dish or 11X8 pan, pour cooked vegetable mixture. Spread mashed cauliflower on top. 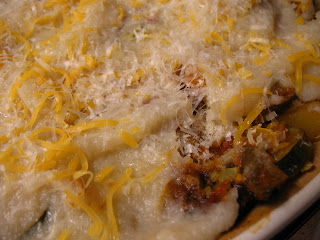 Sprinkle a liberal amount of grated parmesan cheese on to and add a handful of cheddar cheese. Place in a 350 degree oven until bubbly and cheese has browned. 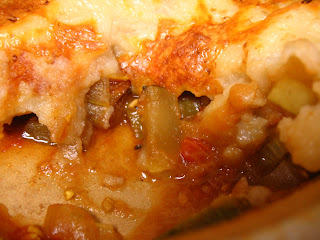 That looks sooo good. Love that pink pan too!

Interesting that the squash was sour.

Looks good! I really like cauliflower, but have never tried it as a potato replacement.

This is indeed an interesting variation of a classic recipe!