Baby, Baby, How was I Supposed to Know...

On Tuesday I started my new rotation in the NICU (neonatal intensive care unit). Now, this is somewhat...okay, TOTALLY uncharted territory for me. I did not do a NICU rotation my fourth year in medical school and it just kind of scares me. Most of these babies are teeny tiny. All of mine are less than four pounds (most less than three) and turning them over to listen to their hearts the first day was a bit nerve wracking...I'm a pro now. Now, I'm on call tomorrow and have no upper level to help me as there are three interns this month to two upper levels. Yes, I am the chosen one to be on call alone. Apparently, this won't really change much because there are nurse practitioners on with us, but it still makes me nervous. I guess that's all the more chance for me to learn quickly. There is SO much that I just don't know.....but one thing I do know is that browned butter makes just about everything better. 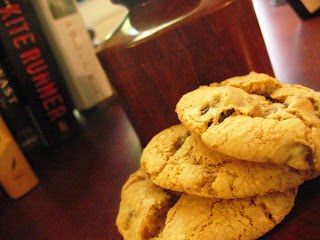 I've found that using browned butter allows you to use LESS butter. I guess the flavor is just so rich, that you don't need as much to give the flavor. So, several months ago I decided to make a new recipe for chocolate chip cookies using browned butter. I must say that they were a success. I took these to a college Sunday School gathering and several of the other teachers requested the cookies just for them! The texture of these was just perfect....crispy on the outside and soft, almost chewy on the inside. 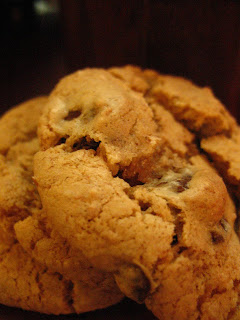 I'm definitely going to try this technique again for some other "traditional" cookies...wonder what a browned butter snickerdoodle would be like? Would it change the taste too much? Hmmm...might just have to try that out! In the mean time, enjoy these! 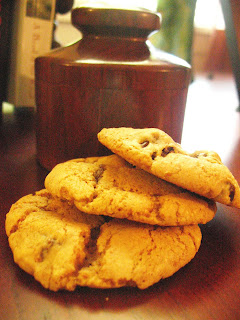 Preheat oven to 375 degrees. In a skillet over medium heat, cook the butter until melted and browned (about 3-4 minutes). Remove from heat and allow to cool slightly. When cooled, cream together the browned butter and sugars. This will be thinner than the typical creamed mixture. Add egg and buttermilk and mix until combined. Stir together flour, soda, and bran. Mix into the butter mixture. Stir in chocolate chunks. Place the dough on baking stone or sheet in tablespoon sized balls. Place stone in oven and cook for 8-9 minutes or until slightly golden. Remove from oven and allow to cool slightly. Remove from stone and cool on cooling rack until ready to enjoy!
Posted by Unknown at 6:40 PM

ahhh i'm in the NICU tomorrow night (shouldn't complain, though, since i'm getting paid a mint to do it . . .) and could really use a cookie right now at the thought of it!

the neonatal nurse practitioners are awesome and very helpful -- and they know a lot (more than me anyway)! so it's actually decent to be on call with them -- at our institution that's pretty much how it usually is.

I do a browned butter oatmeal that is my favorite. I'll have to make these for hubby, because his fav is choc chip.

Good luck on your rotation.

Have you made these for me yet?

Sarah - Getting paid...girl, you can do it! Wish I could mail you one of my oatmeal bars that I made for tonight.

Ramona - browned butter oatmeal...sounds interesting. You should try these even if only for your hubby.

Daddy - No, I haven't...I shall have to do that! Yes, yes...I do talk to my babies. Sometimes I wonder if the nurses think I'm crazy!

Ari - We shall see...so far, it's been pretty calm but you never know what's going to come in or who's going to try and crump on you.

You go in the NICU!

Have fun with the babies! Awesome that you are caring for such tiny little humans.
Browned butter is such a great ingredient! Bet the snickerdoodles would be awesome, too. Great cookies!

Have fun with the tiny babies.

My mom is a NICU nurse - and always has been. 30-some years now; she loves the babies to PIECES. (The administration? Not so much.)

I've never browned butter, and I've always wanted to try it on pasta. Maybe these cookies could be dessert!