Before I get to the pizza, I want to make you aware of a simple way that you can help someone in need. Kristen, of Dine and Dish, has a friend, Ann, who is battling breast cancer. As you can imagine, there are lots of struggles that come along with this, one of which is money. Any time you visit Kristen's site some she "earns" money, which she is donating to Ann's family. So, stop by and help Ann out through Clicks-4-a-Cause. Now the pizza... 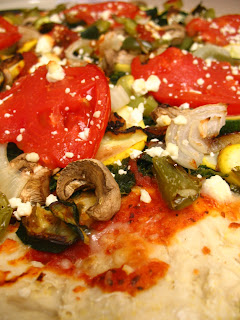 I've been seeing several people making these wonderful looking vegetable pizzas. Well, I decided to join in and make a roasted veggie pizza. It was pretty good but I think that my yeast was pretty dead because the crust was fairly flat, whereas it is normally delicious! I didn't put much sauce ON the pizza because I was putting tomatoes on there, but after the fact, I think sauce on the crust would have been better. I ended up dipping it in sauce like you would stromboli. I used goat cheese on the pizza and it was pretty good. I'm going to have to revisit this sometime. 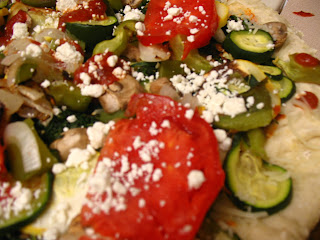 Recipe...well, basically you make the crust linked above, roast the desired veggies (I did zucchini, squash, peppers, mushrooms and I think eggplant). Then spread sauce on, put the veggies on, add some tomatoes and cheese and bake at 425 for 15 minutes.
Posted by Unknown at 8:18 PM

Is that feta on top? Love a good veggie pizza, even better when it's homemade - yum!

claire. are your parent's riding motorcycles these days!!!??!?!

It looks pretty good Claire. I like the crust recipe has WW flour in it too.
Ramona

Hi !.
might , probably very interested to know how one can reach 2000 per day of income .
There is no need to invest much at first. You may start to get income with as small sum of money as 20-100 dollars.

AimTrust is what you need
The firm represents an offshore structure with advanced asset management technologies in production and delivery of pipes for oil and gas.

It is based in Panama with offices everywhere: In USA, Canada, Cyprus.
Do you want to become an affluent person?
That`s your chance That`s what you desire!

I`m happy and lucky, I began to get income with the help of this company,
and I invite you to do the same. If it gets down to select a proper companion who uses your savings in a right way - that`s the AimTrust!.
I take now up to 2G every day, and my first deposit was 1 grand only!
It`s easy to join , just click this link http://pybygaxu.easyfreehosting.com/ofegogu.html
and go! Let`s take this option together to get rid of nastiness of the life