Now, obviously, I didn't pick out the groomsmen...David did...but I know them all!  What a great bunch of groomsmen to stand by and support us as we start our life together.  (Such a cool picture!) 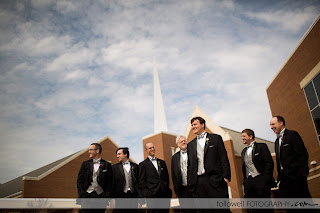 My dad tried to join in but I think he's just crashing the party!  ;-)  Just kidding! 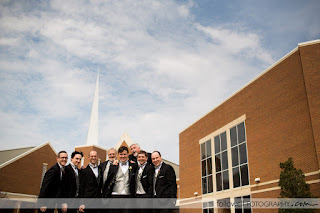 First up is Michael... 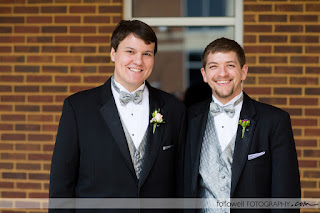 Interestingly enough, Michael and I grew up at church together, did debate together, were friends in med school.  We taught Sunday School together and were in a SS class together.  He went on his first missions trip with my dad...and now wants to do medical missions.  He and David are in the same training program at the med center, doing med-peds...David is a year ahead.  Michael was actually his M4 on his first wards team (along with another groomsman as the lead resident).  So, he has been a part of both mine and David's life.  So glad he was able to be a part of our day! 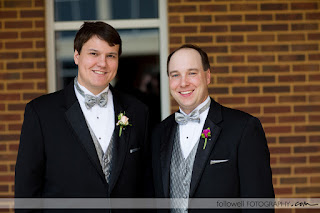 Next is Andrew.  Andrew is in David's same year in med-peds.  He was the first person that David remembered from orientation for residency.  David says that they just got along and commiserated about the difficulties of residency.  From my standpoint, he's just a fun, down to earth guy and will be staying to work here next year...and likely with David in the future.  He and his wife have been so helpful.  I'd love to do things with them...double dates, maybe?! 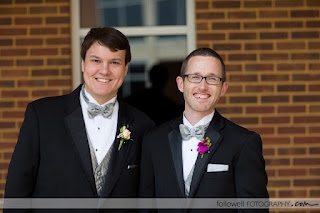 And now Kevin...what to say about Kevin?  Well, Kevin was David's first pediatric upper level (with Michael as the M4, remember?) and is also a med-peds guy.  David says that Kevin made him realize that the med-peds folks take things seriously and work hard...but have fun, too!  I mean....he is going to Montana to work so that he can hike and enjoy the view in his spare time. I worked with him several times in the PICU which made that overnight shift much better. 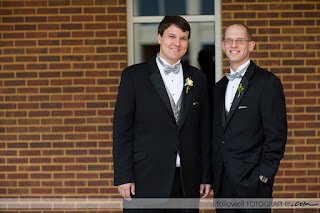 The last of the med-peds guys is Zeb.  Zeb has been one of David's attendings during residency.  He and his wife, Anna, have been so helpful with K.  David would take her to their house when he had to be at the hospital before daycare opened or overnight.  Anna just took her on as one of their children.  K loves "Miss Anna" and "Mr. Dr. Zeb!"  And we love them, too!  I think Zeb and Anna were the first ones to realize something was going on between me and David.  They started praying for us before we were even "official."  What a blessing from God to have friends like they! 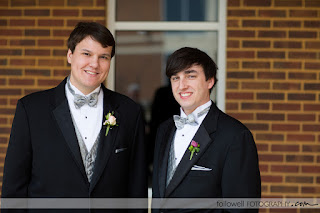 This is Philip, my little brother.  He's really grown up and become such a neat guy!  I love watching him working on cars, with Kenna, with K, and more.  Who would have thought my little brother would grow up and be so handsome, kind, smart, and fun!  He and Kenna just bought their first house...near the beach, too!  Hmmm...I smell a trip coming. 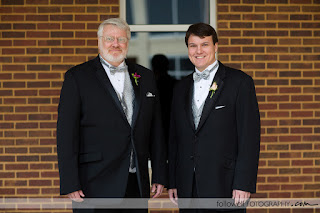 And last but not least is David's dad, Jim...his best man!  Jim is not a man of many words but he is a quiet leader.  For that David and I are both thankful!  He has worked hard and now he is enjoying being a granddaddy to Kate.  Tinkerbell, tea parties, painted toe nails...he'll do it all!  I can't wait for him to have more grandchildren.  :-) 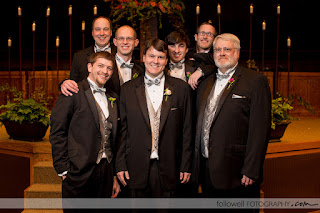 What a great group of guys! 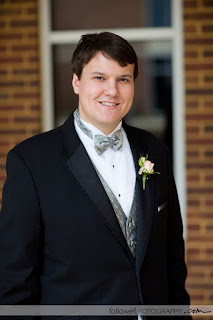