When David asked me to marry him, I already knew who I'd ask to be my bridesmaids.  Right after college, I wondered who I would ask.  They say you leave college with your lifelong friends but most of my friends came from childhood.  In fact, half of my bridesmaids were childhood friends! 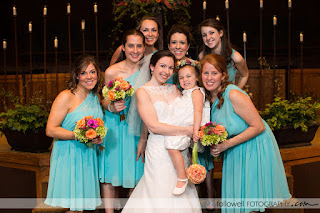 Robby did a great job showcasing all of my girls' beauty as well as the gorgeous flowers by Wendy.  We ended up with a great day outside, so we took some pics in front of the church. 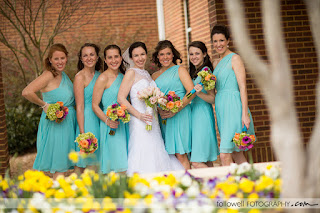 Now, allow me to introduce you to my bridesmaids. 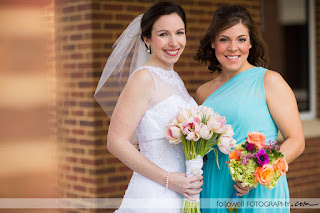 Jennifer if one of my childhood friends.  We grew up in church and school together.  We were ballet friends - she took, I think, a year (or two) longer than I did but we both LOVED it!  Maybe K and E will both love ballet, too!  She was the first of my friends to get married and I was able to be a bridesmaid and sing in her wedding...I even caught her bouquet (the first of THREE mind you!).  So glad she could be a part of my wedding...with baby number TWO growing inside!  :-) 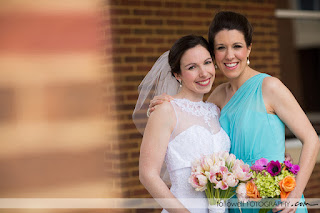 This is Stephanie, David's sister.  We haven't gotten to spend that much time together just due to schedules and distance but I am so blessed to call her my sister-in-law.  She is a children's minister and you can tell that she loves what she does and is great at it!  She loves K and is always doing things to encourage her.  I hope that we will have more nieces and nephews to add to the mix so they can love Aunt Stephanie, too! 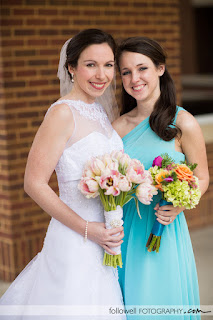 And again, my sister-in-law (married my brother), Kenna!  She has worked so hard to be a great P.A. but has always maintained her sweet spirit.  She helped make some of the reception decorations and did my hair...all on short notice and without complaining.  Funny story - Kenna's brother was in my class at school.  We had study hall together, and he and this other guy called me "val" because they were sure that I'd be class valedictorian.  At that time, Philip and Kenna weren't even close to dating...no clue they would be!  :-)  I'm so thankful for God blessing Philip with such a kind, patient, and generous wife...and glad she is part of our family now! 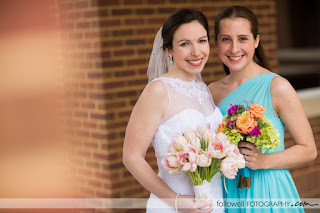 This is Sarah, my matron of honor.  She and I met in medical school and did our pediatric training together.  We sat on opposite sides of the room first year but both did a summer program in the peds clinic after that year...so we were FORCED to spend time together.  After that, we working in the Pediatric Interest Group together and were fast friends!  We tried to do as many rotations together as possible third year and Sarah worked hard to keep me at UMC for residency...promising we'd find me "a hot resident to marry."  Well...it worked!  I stayed...and found a hot resident to marry.  ;-)  We've been through a lot together in 8 years (really? wow!) and I am so thankful for her. 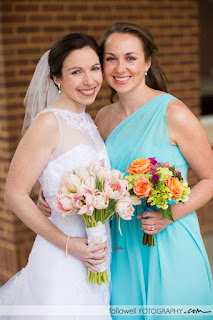 This is Sarah, my "oldest" friend.  We have been friends for as long as we can remember...forced together because our mothers were friends.  But how glad I am that we were.  Sarah is the kind of friend that I don't see much (she lives in CA) but whenever we DO get to see each other, it's like we haven't been apart; we pick up right where we left off.  She is a pediatric nurse and spend some time in Africa at an orphanage, which is where she actually met her husband!  It was such fun to be a part of their wedding...and to have her be a part of mine.  They are moving closer next year but not quite close enough.  Guess we'll have to take a road trip to visit. 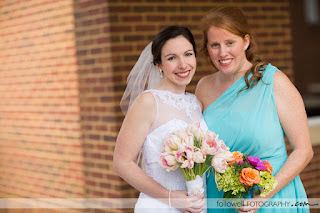 And last but not least is Katie.  Katie and I haven't always exactly been friendly with each other.  We've known each other since Brownies...but we did NOT like each other.  In fact, in any scout picture, I'm on one end and she is on the other.  I thought she was loud and annoying (which was true) and she thought I was a goody-goody (which was true!).  Then came the day when she and Jennifer became good friends.  Being that Jenn and I were friends, Katie and I were basically FORCED to be friends...but it worked!  I was in her wedding and now she's been in mine!  She and her husband are such fun.  Thankfully, they live nearby, so we can hang out...if things would ever slow down! 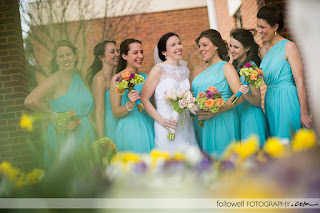 I am so blessed to have each of these girls in my life and so thankful that they would honor me and David by supporting us on our wedding day. I am thankful to know that they will be the kind of friends to hold me and David accountable.  Can't wait to spend more time with them!
Posted by Unknown at 10:49 PM

I loved each tribute you gave "the girls". I think you got it just right!