When I saw the name of this month's Daring Baker challenge, I thought for sure that I had probably tasted this bread but didn't realize it.  The name just SOUNDS Russian!  However, I don't think that I have ever had it prior to making it.  The Daring Baker’s October 2011 challenge was Povitica, hosted by Jenni of The Gingered Whisk. Povitica is a traditional Eastern European Dessert Bread that is as lovely to look at as it is to eat! 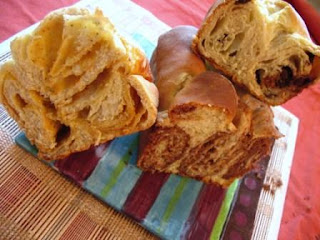 I was a little nervous when it came to this challenge.  You see, we've had challenges before that required rolling the dough so thin that you can read something through the dough.  In those challenges, I had such trouble rolling out the dough.  This time, however, was a different story.  (Can you see where I work?!) 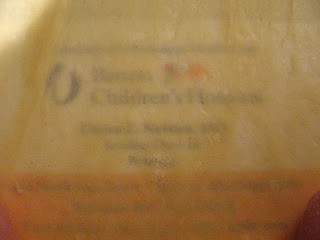 I don't know if the difference was the dough or the rolling location.  This was a GREAT dough to work with.  It rolled SO easily and stretched beautifully when I began to "pull" at it.  I used the knuckle strategy when I pulled my down-turned hand out under the dough, which causes the dough to stretch.  Worked wonderfully. 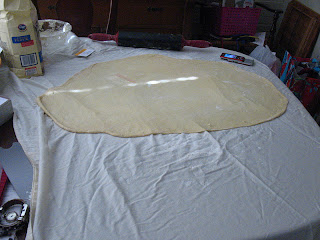 The other change was using my dining room table to roll it out...MUCH MORE ROOM!  I did have to use a bed sheet as my pastry towel but that worked well, too.  Hmmm...I'll have to remember this in the future. 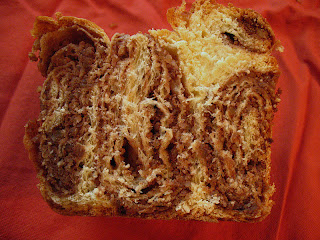 I was planning on doing maybe two different fillings but didn't have enough nuts.  So, I decided to use the traditional cinnamon nut filling (I used pecans) for one loaf.  This one ended up being the most striking one on the inside and was definitely flaky.  In fact, when I picked it up it flaked away!  This is one that I left at clinic today. 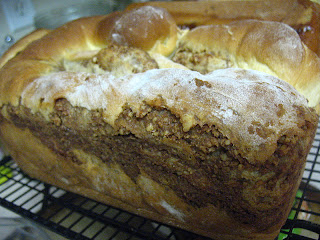 For the next loaf I used some of the remaining nuts, mixed it with orange marmalade and some sugar.  SURPRISE!  When I pulled the loaf out of the pan, it had formed an orange caramel. 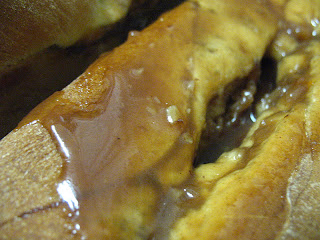 Didn't expect that but the caramel did taste GREAT!  I think that I will end up freezing this one and taking it to Thanksgiving.  I hope the caramel doesn't get too hard. 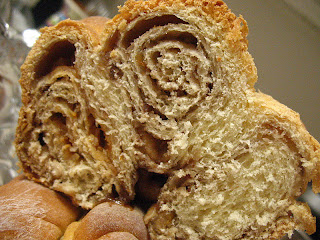 Loaf three was to be a cream cheese chocolate chip loaf.  Well, I think I under did it on both the cream cheese AND the chocolate chips.  The swirl is very unimpressive.  Adding some icing to the top added to the flavor.  This loaf found a home in the ER! 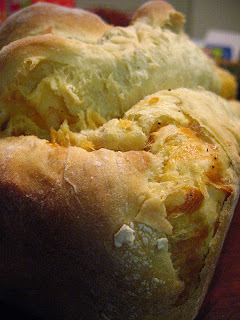 And loaf four is the cheese loaf.  I got some inspiration after D brought my sunglasses back to me.  I knew I was going to give him a loaf and suddenly remembered that I had some cheese in my refrigerator. I knew that he would like a cheese loaf.  So, I sprinkled some Nature's Seasoning on the dough, then put sharp cheddar cheese on that and topped it all with Parmesan cheese. 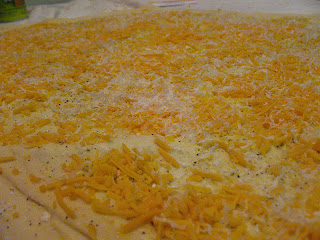 Oh my goodness!  The aroma coming out of my kitchen when that one was baking was amazing.  It smelled like a pizza parlor is the best way.  And the loaf was beautiful!  Something about the cheese made the inside more bubbly than swirly but I liked it! 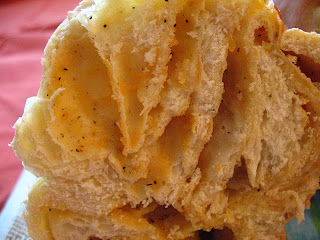 Left that one at clinic, too.

All in all, this was a fantastic challenge!  I actually enjoyed rolling the dough out and trying to stretch it as thin as I could.  Coming up with different fillings and seeing how they came out was fun.  And, as always, giving away what I made always gives me joy!  Thanks for a great challenge.  Try this one out for yourself. 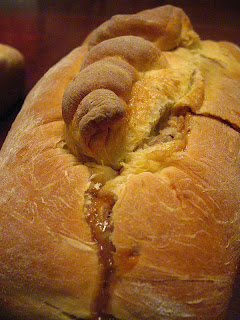 Place sugar and flour in a small bowl.  Pour water over and stir to dissolve.  Add the yeast and stir.  Cover with plastic wrap (or be brave like I was and don't!) and allow to sit for five minutes. 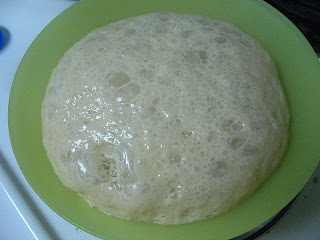 Place the milk in a sauce pan.  Place on medium heat and cook until the milk reaches 180 degrees F.  This scalds the milk.  Remove from heat and allow to cool to 110 degrees F.  Meanwhile, put sugar and salt in a large bowl.  When milk is cooled, stir it into the sugar until dissolved.  Add 2 cups flour, beaten eggs, melted butter, and yeast mixture.  Stir until well combined.  Slowly add flour until the mixture pulls away from the bowl and is not sticky (I ended up using 7.5 cups total, including the original 2 cups).  Divide the dough into four equal portions and place in smaller bowls.  Cover and allow to rise in a warm place for 1.5 hours (mine probably rose about 4 hours!). 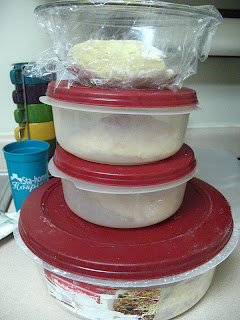 Melt butter and milk together.  Stir in remaining ingredients.

Place a clean bed sheet on a large table.  Sprinkle flour on the sheet so that there is a thin layer of flour on the sheet.  Place one piece of dough on the sheet.  After lightly flouring the rolling pin and dough, roll out to about 12 X 18 inches.  The dough will still be fairly thick.  At this point, you can continue to roll the dough or you can start stretching by hand.  Slowly roll/stretch until you can see through the dough enough to read something or see patterns. 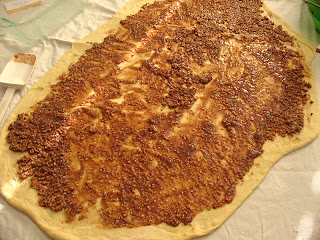 Once it is thin enough, place your filling on the dough to cover it.  Then roll up jellyroll style. 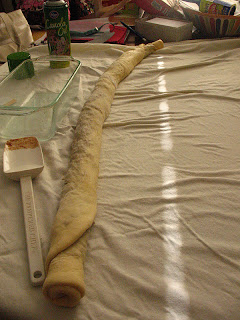 Spray a bread pan with cooking spray and place the dough in the pan in a U-shape.  Do this with all the pieces of dough. 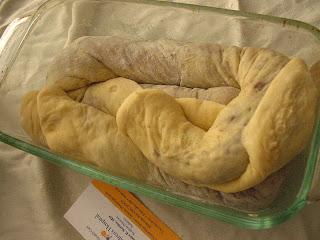 I had to cook three and then prepare my fourth because I only have 3 bread pans.  When your loaves are ready, preheat the oven to 350.  Let the dough rest 15 minutes.  Then place the loaves in the oven and cook for 15 minutes.  After 15 minutes, decrease the oven temperature to 300 F.  Then bake for 30-40 minutes, or until the loaves are golden.  After removing from the oven, allow the loaves to cool for at least 20 minutes before removing from the pan.  If freezing a loaf, wrap well in plastic wrap and then aluminum foil.  Can freeze for 3 months.  Enjoy!

Cheese!! I think you're daddy likes cheese. Maybe you need to make a cheese one for him, too. Looking forward to goodies at Thanksgiving.

The orange marmalade caramel sounds fantastic! I bet your coworkers loved you for sharing this delicious bread - I know mine did!

Oh wow those loafs look obscenely heavenly! Especially given the fillings you mixed in!

Yumm! This looks so delicious! I like that you can make it sweet or savory! You did an awesome job

Great job on your povitica! They all look great, and you picked some nice fillings, too! What kind of doctor are you? My husband just started his intern year in internal medicine.

Wow, Claire..4 loaves! They all look delicious, but I'm loving how your orange marmalade turned into swirly orange caramel. I'd like the savory cheese loaf for dinner and orange caramel for dessert, Doc ;) Beautifully done!