Fun at the Fair

So, this is a "life" post!  Last night I went to the fair with a friend and his little girl.  I haven't been to the fair since I was a junior in high school - 11 years ago. 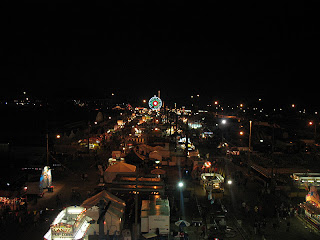 At first I was concerned that I wouldn't get to go due to a sudden rain storm, but we waited for about 15 minutes and it stopped...though my shoes DID get muddy and almost got stuck on the walk in.  We rode lots of the kiddie rides first...horses, bees, bears, the fun house X 5 (a slide!).  Our fun was stopped, though, when K was 1/2 inch too short for the caterpillar (really, come on!).  She was quite disappointed, so we did the fun house one more time and then went for food. 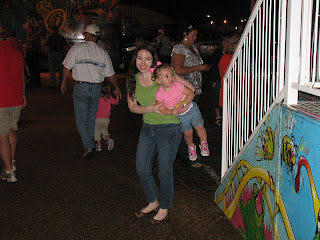 My food memories from the fair are free biscuits and elephant ears.  As you can imagine, the choices were endless - Burgers, pizza, hotdogs, corndogs (even chocolate dipped...ew?), nachos, gyros, sushi (?), roasted corn, Saratoga chips (apparently fresh cut potato chips loaded with chili and cheese), fried candy bars, funnel cakes, fish, chicken strips, cotton candy, etc.  There was even a donut burger - Krispie Kreme donuts as the bun with a big ole burger in between - WOW! 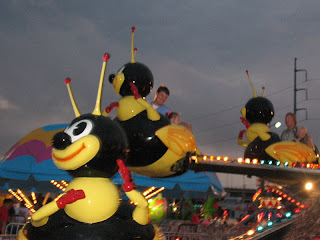 We ended up getting chicken on a stick and fish from Penn's (local fish place).  On the way back to see the circus (that ended up NOT happening due to the equipment being wet - boo!) and ride the big yellow slide (also closed due to wetness - BOO!) I got my elephant ear.  Oh, the goodness.  It's basically fried dough with cinnamon sugar on it - I think it' an un-funneled funnel cake! 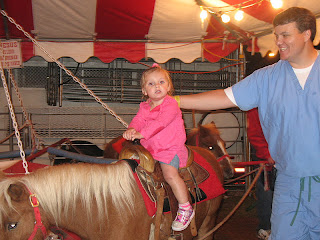 Then we rode the ferris wheel, got K some "ice" (sno cone), rode the pony, and trecked back through the mud to the car.  It was a great night!
Posted by Unknown at 8:39 PM

You would have to be very brave to try sushi at a fair.

Fair sushi is probably made out of twinkies and fruit roll-ups (and then deep-fried!)

Aww so much fun! I love doing "life" things like that...makes the day that much better.

Solitary Diner - Yeah, wasn't so sure about that one.

CBJ - I'm sure they have something like that, too...gotta fry everything! This was real sushi, though!

joanne - It really does, doesn't it!?