At the beginning of September we had a get together on a Saturday night to watch college football and just hang out.  I planned to take something and had a triple fudge cake mix on my hand.  Sooo, I decided to make a cake that is pretty popular around the South. 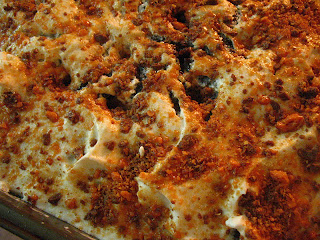 Honestly, I don't even know what it's called but it is some kind of good!  I mean, cake with sweetened condensed milk with butterfinger on top?  Come on!!  I did try to "lighten" (HA!) things up by using applesauce instead of oil when making the cake.  I also used light cool whip.  Everyone at the party enjoyed it.  My favorite part...the part of the cake that soaks up all the milk.  Yummy! 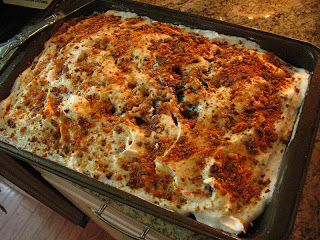 Mix and bake cake in a 13 X 9 pan according to package instructions.  Remove from oven and allow to cool for 3-4 minutes.  Poke holes in the cake and pour sweetened condensed milk over cake, being careful to cover the entire cake.  Allow to cool completely.  When cooled, spread the cool whip over the cake.  Then sprinkle Butterfinger over the Cool Whip.  Refrigerate until ready to serve.  Enjoy!
Posted by Unknown at 9:48 PM

I had to read the recipe title multiple times to make sure I was reading it correctly! This sounds awesome!

If you really wanted it SUPER gooey, you could use more sweetened condensed milk...but it would be SUPER sweet!