During the week last week, I needed to bake! Studying had gotten to me. It also happened to be one of my friends' birthday. Hey, hey...a reason to bake! So, I decided to try a new Snickerdooddle recipe. 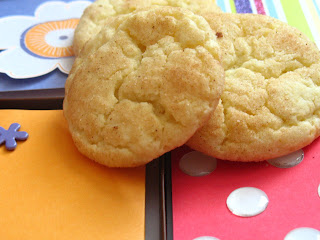 Many of you have probably heard about or seen the Sweet Melissa cookbook; in fact, there were several giveaways, all of which I entered but none of which I won! Oh, well. I did, however, see this recipe from the book and decided to try it. It turned out GREAT! A little simpler than my recipe and it was definitely easier to roll...chilled nicely. 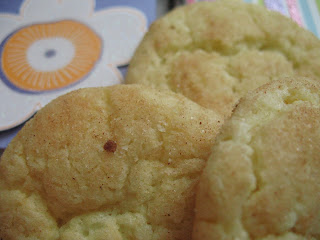 Anyway, I took a little bag of these to Emily at church and she later said that she barely got out of the orchestra room with them in tact! I agree, they were quite good. The outside has that sugary crispness but the inside is soft. In addition to great texture, they're not flat! 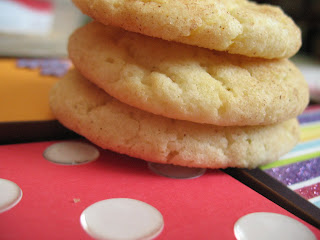 They stayed nice and rounded on the top...though one of my friends has a recipe that make really rounded snickerdoodles, maybe she uses shortening? So, if you want a good cookie to make with your kiddos or even to relieve some stress (like me!), try these cookies! 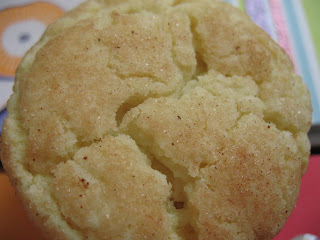 Snickerdoodles- adapted from The Sweet Melissa Baking Book by Melissa Murphy. All rights reserved. Copyright © Melissa Murphy, 2008
½ pound (2 sticks) unsalted butter, softened
1 ½ cups sugar
2 large eggs
2 ¾ cups all-purpose flour
1 ½ teaspoons cream of tartar
1 teaspoon baking soda
¼ teaspoon kosher salt
For the cinnamon sugar: I never measure this...I just do it by eye. Pour some sugar in a bowl, add a good amount of cinnamon and stir together. If it's still pretty white, add more cinnamon!
Cream the butter and sugar until smooth, 2 to 3 minutes. Add the eggs and mix until combined.
In a separate bowl, whisk together the flour, cream of tartar, baking soda, and salt - Or use my easy technique and put all on top of the butter mixture...stir ONLY the dry ingredients and then mix into the butter! One less bowl to clean! At this point, the dough it too sticky to roll, SOOOO, refrigerate until firm, about 1 hour.
Preheat the oven to 350°F. Prepare your baking stone or sheet. Make the cinnamon mixture.
Using a tablespoon, get some dough and then roll it into a ball with your hands (after they've been washed!). Now, roll them in the cinnamon sugar. Place the cookies 2 inches apart on the prepared cookie sheets. Be sure they are secure on the pan. Bake for about 12 to 13 minutes, or until the bottoms are slightly golden in color. Do NOT overbake...if they still look slightly undone at 12 minutes, go ahead and take them out. Leave them on the pan for a few minutes and they'll cook a little more but not overbake! Remove to a wire rack to cool.
Makes 3 dozen (give a few more) cookies 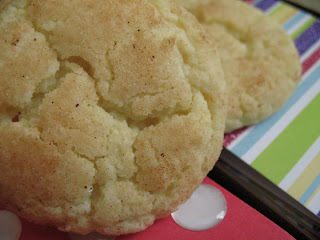 Snickerdoodles! My favorite cookie. Those are so making me want some!

Mmmmmm....
I haven't made snickerdoodles in a few years. After seeing yours, I'll be making them shortly.
:)

I love snickerdoodles... they're my absolute favorite cookie for sure. I'm always up for trying a new recipe. That Sweet Melissa Baking Book... I keep hearing great things about it!

i liked sweet melissa's recipe a lot, and those came out great! when i made mine, i had more dough than i wanted to bake off, so i wrapped it up and froze it. that frozen portion still rolled and baked up perfectly after thawing.

Can you believe I have never made these cookies??? They look so light and fluffy.
I don't know what I am waiting for...
Although I should wait out this heat wave. I don't want to heat up the house with the oven!

Those are some sweet looking snickerdoodles! YUM!

Those look soooo good, Claire. Hmmm... I may see some cookies in our future :)

Snickerdoodles sound so fun and are so tasty! No wonder they barely make it to the orchestra. Heheheh.Love the photos.

I love soft snickerdoodles. Your recipe sounds like a keeper! I'll have to check out that cookbook.

Peabody - Me too! I've decided they're my favorite.

Jane - They're a great cookie...good for little hands to help!

Recipegirl - Looks like they're pretty popular. I've heard great things, too. I'll have to check it out when I see it. BTW, I'm using one of your recipes today!

Steph - Thanks for the recipe. I've never thought of freezing this dough, but I bet it would be good seeing how soft it is already.

Annie - NO, I can't believe it! You should try them.

Fran - Thanks! Hope you have some soon.

Alisha - I hope you got some sweetness in your life soon.

Kristen - You should make some with your little ones.

Elle - And the next morning, her brother had eaten ALL of them!

Lynn - Thanks! It appears that this is a pretty good book. I'd like to pick it up, too!

Oh boy, I want some too!