Chestnuts Roasting on an Open Fire...

...Unless you don't have any, then you use pecans. My Sunday School class had a Christmas party a week ago. It was a really clever idea...A "souper" party. We had three different soups (chicken noodle, seafood bisque, and southwestern - all homemade) and grilled cheese. I was told if I wanted to, I could bring a sweet. Well, what kind of offer is that? I knew that the other girl would make a cake, so I decided to take pecan pie. However, I wanted to try one of Dorie Greenspan's recipes, so instead of my grandmother's recipe, I used hers.

I guess I'm just partial, because, even though this was a good pie I like my grandmother's better. This one has a really crisp top before you get to the inside. One thing I did REALLY like about this was the cinnamon. Even with only 1/2 teaspoon you can taste it in the pie and I think it really added to the flavor. I also experimented with the crust and used whole wheat flour. The flavor was nice, but if I do that again, the shortening amount will have to increase a tad. I got several complements from the people who ate it...for some strange reason most people at the chocolate cake. Go figure! :-) Side note: I won the "get to know you" game (with 9/18 correct - who knew 50% could win!) and came home with a jar of homemade muscedine jelly. It's good. 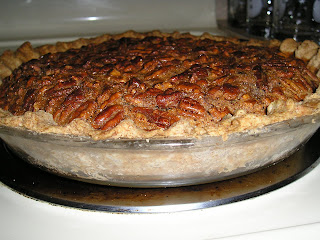 My Favorite Pecan Pie
by Dorie Greenspan, Baking from My Home to Yours
1 9-inch single crust (she says partially baked and cooled, I didn't notice this and baked mine with the filling - no harm done)
3/4 cup light corn syrup
1/2 cup packed light brown sugar
3 T unsalted butter, melted and cooled
3 large eggs, preferably at room temperature
2 teaspoons instant espresso powder (optional, didn't have so didn't use)
1 teaspoon pure vanilla extract
1/2 teaspoon groun cinnamon
1/4 teaspoon salt
1 1/2 cups (7 oz) pecan halved or pieces
3 ounces bittersweet chocolate, coarsely chopped (optional, I didn't use)
Preheat oven to 425 degrees F. In a large bown, whisk the corn syrup and brown sugar together until smooth. Whisk in the melted butter, then add the eggs one at a time, beating until you have a smooth, foamy mixture. Add the espresso powder, vanilla, cinnamon and salt. Mix and rap the bowl against the counter to pot any bubbles that might have formed, then stir in the pecans and chocolate. Turn the filling into the crust.
Bake the pie for 15 minutes. Lower the oven temperature to 350 degrees F. Cover the crust with a pie shield or aluminum foil with filling still exposed. Bake the pie for another 15-20 minutes (total time 30-35) or until it has puffed (this middle and the edges should be fairly evenly puffed), is beautifully browned, and no longer jiggles when tapped. Transfer the pie plate to a rack, remove the shield and cool to room temperature.
Posted by Unknown at 11:46 PM

I think I'm partial to my mom's recipe for pecan pie which is a pretty standard one I think. I've looked at getting espresso powder before but couldn't bring myself to buy it because it was so expensive!
Your party sounds fun; I've been wanting to do soup/sandwich for one of our Sunday school parties. And congrats on winning, muscadine is good!

Well, my mom's pecan pie recipe is the same as Gails, LOL! :) I am not fond of it, but my husband is. I never seem to make it for him though. I have a recipe for pecan pie bars I want to try, but right now, I think I'm through with sweets for a while. On that post-Christmas overload... although, we do have a Super Bowl party coming up that I could do them for.

I don't think I've ever tasted cinnamon in a pecan pie, interesting. Is this a new cookbook you got?!

I think trying new pecan pies is always hard because you tend to like what you are used to. It looks good though.