This month's Daring Baker's challenge was a bit different.  Typically a baking challenge is something that is sweet. Hannah of Rise and Shine was our October 2013 Daring Bakers’ hostess and she challenged us to bake our own double crusted savory pot pies. Using any from-scratch crust and filling we choose, we were allowed to get completely creative with our recipe, showing off the savory flavors and fillings from our own home or region.  When I told David that this was the challenge his immediate reaction was "sigh."  He's convinced he doesn't like chicken pot pie.  I quickly ensured him that the challenge wasn't for chicken pot pie but for a savory pot pie.  We had fun with this one.  I made two pot pies. 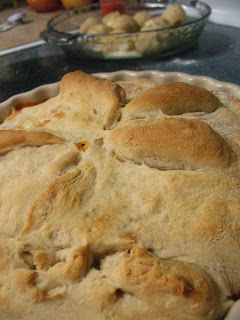 The first one was a pizza pot pie.  I just made a batch of my pizza crust and rolled it out thin. 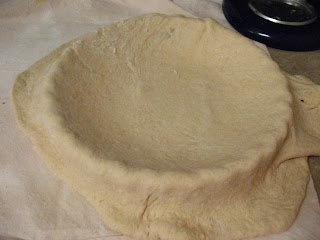 Then I placed the dough in a pie plate.  I used pepperoni, roasted veggies and cheese as filling. 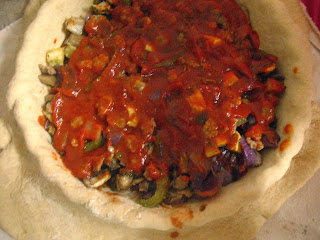 We all liked it fine but decided we prefer regular pizza. 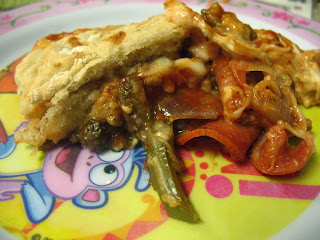 The next pie I made was a breakfast pie.  I used a gluten free biscuit recipe because we are going to be trying a couple of weeks of gluten free meals. 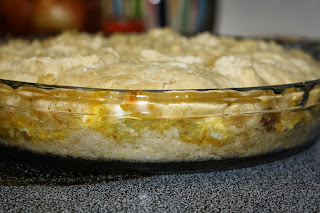 It was actually really good and David said that he liked the pie better than my traditional Christmas breakfast casserole.  Wow! 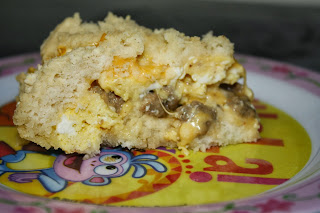 I just scrambled eggs then layered biscuit, eggs, sausage, cheese, and biscuits and cooked it until the biscuits were done.  It was SO good!  I will definitely be making this one again! 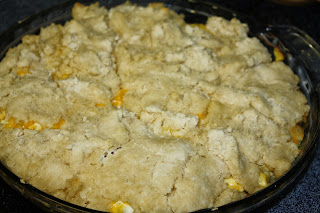 Add a scant cup of hot water. Mix. Add 2 teaspoons olive oil. Add 1/2 cups of flour as needed (usually around 2 times). Knead. Place dough in an oiled bowl. Place this bowl in a larger bowl with warm water. Microwave for 2 minutes at power level 2, rest for 5 minutes (or longer if needed). Punch down and knead a couple of times.

Preheat oven to 400 degrees.  Allow the dough to rest then roll out fairly thin.  Put in a pie plate.  Put pizza sauce on the bottom of crust.  Then layer with your desired toppings.  I used turkey pepperoni and roasted veggies.  Place cheese on top then fold the extra dough over the top and pinch the layers closed.  Bake for 15-20 minutes until crust is done.

Scramble eggs (6 eggs was perfect).  Make your desired biscuit recipe.  I used this one:


Preheat oven to 400 degrees.  Whisk together the flour, starch baking powder and salt. Cut the fat into the flour either with a pastry cutter, two knives or by rubbing the fat into the flour with your fingers. Make sure you leave some larger pieces of fat. Add the liquid, starting with ½ a cup and gradually adding a little more at a time, mixing until the dough comes together. Put a little flour on a work surface and dump out the dough. Knead 3 or 4 times then either roll or pat it out to about ½ inch thick.

In a pie plate, put half of the biscuit dough and press over the plate.  Put scrambled eggs on top of the biscuit dough.  Then put a layer of sausage, then a layer of cheese.  Spread the remaining portion of biscuit on top.  Place plate in oven and bake for about 15-20 minutes until it is golden.  Enjoy!
Posted by Unknown at 8:59 PM

Breakfast pie - what a great idea! I bet the males in my family would especially love it. Good job on the challenge!