I'm quite excited! After work on Tuesday, I'm finished for five days at home. I haven't been home (or seen my dad) since August. It's time!!! While I'm there I will definitely be making some fun and new things, so watch for them. Last week, I pulled out a half-used bag of lentils to make something that would be comforting for the cool weather coming up. Let me just say that I am SO glad I discovered lentils. I was under the impression that lentils were like your typical bean and took a while to cook (or at least required soaking). 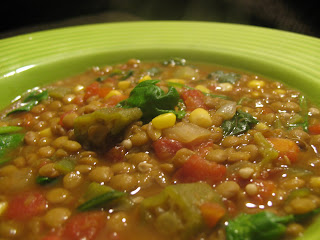 Well, I was WRONG! Lentils cook SO quickly. In fact, they are a great meal to make if you don't have much time (or at least not much hands on available time). Basically, you do a 4:1 ratio of liquid to lentils, bring to a boil and then simmer for 20-30 minutes. I cooked mine in vegetable broth (I had previously used chicken broth and DO think that the chicken broth lends a good bit more flavor but the veggie broth worked well.). While the lentils were cooking, I cooked a bag of frozen gumbo vegetables. You could really use any veggies you want but these were the ones that worked for me. After the lentils were done I stirred in the veggies, added about half a bag of spinach and allowed it to wilt. The last thing I added was a can of diced tomatoes. I thought about adding rotel tomatoes, and in hindsight, wish that I had! For some reason, I forgot to add any seasonings, and though this was VERY good, it could have used a bit more flavor. The spice from Rotel tomatoes would have been a perfect addition. 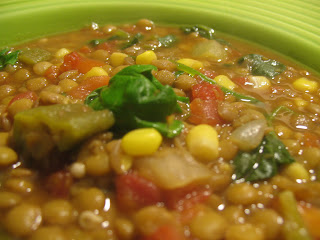 Anyway, if you haven't tried lentils, I highly recommend that you do. They are easy to make, full of HEALTHY protein, no cholesterol, and are really VERY filling and satisfying. As to the title, though it's not lent, this would make a great meal if you decided to give up meat for lent. :-) 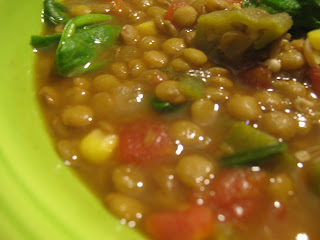 Lentils with Spinach and Vegetables
1 cup lentils (1/2 bag)
4 cups vegetable broth (or another flavor broth you want to use)
1 bag frozen gumbo vegetables (or any vegetables you want)
1/2 bag (4-5 cups?) spinach
1 can diced tomatoes
seasoning, to taste

In a large pot, place lentils and broth. Bring to a boil and simmer for 20-30 minutes, until lentils are tender (the broth will be mostly absorbed at this point.). It's probably a good idea to check at 20 minutes to be sure the liquid isn't gone...the first time I made lentils I burned a good bit of them because the liquid was all gone. Meanwhile, cook the frozen veggies. When lentils are ready, stir in the veggies and any extra seasoning. Add the spinach and stir. Cover pot with a top for a couple of minutes to allow the spinach to wilt. Stir in the tomatoes and enjoy!
Posted by Unknown at 5:48 PM

The soup looks great! Hope you have a wonderful holiday and time off! By the way, I'm a little slow and behind on blog reading, and just saw your post about the Jumbo rice krispies treats. Thanks for the link.

Glad you are getting to go home. Know you'll have a great time with 5 days off.

Soup looks good. Am looking forward to the posts.

I love lentil soup. It's what I get at the Acropolis in Chattanooga instead of salad.

Can't wait to see you!

Had a bag of lentils in the pantry. Thanks for the inspiration. Giving it a try tonight!! Will let you know how it turns out!!

Lentils were new to me, too. I've only used the red ones so far, but I'd love to try this kind! The soup looks great.

I just tried lentils for the first time recently. This looks delicious!

Yum! This soup looks so filling, healthy, and delicious!

Love lentil stew - this one looks great and the perfect way to take the chill off.

I love lentils! I make lentil tacos that are sooo good that I don't even miss the meat. Thanks for another way to use them.