Well, yesterday I had my match day ceremony...that means that I found out where I'll be doing my pediatric residency! In November/December, I went to several different locations and interviewed. Then in February, I submitted a rank order list, telling the powers that be where I wanted to do my residency (and the programs submitted lists telling which residents they wanted). Then, yesterday, all was announced across the entire nation. Before all that, though, my class had a party at a local pizzeria/bar. 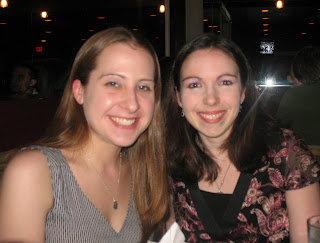 It was lots of fun to see my fellow classmates, as fourth year has us so spread out we don't ever see each other. Unfortunately, I spent the entire time waiting for a wonderful pizza to come out (this place has LOTS of unique pizzas); however, they never brought one out, so I had to settle for supreme. It was good but not quite what I wanted...oh, well...at least I had fun! The next morning, the alumni association hosted a breakfast for us. My dad was able to attend with me. 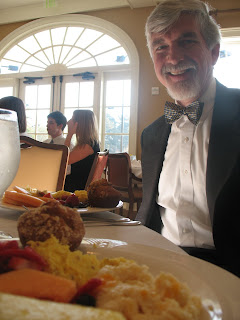 They had tons of food to choose from. You could make a breakfast burrito, though I chose to just get eggs. They also had grits, waffles, biscuits, hashbrowns, muffins, cinnamon buns, and fruit. 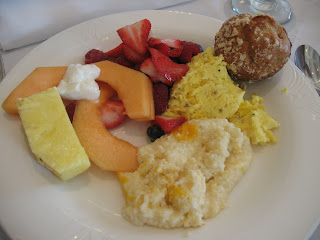 I got eggs, which were SO GOOD, grits, which were not so good, an apple muffin, which I ate the top of (that's my signature move!), and fruit...excellent raspberries, cantaloupe, strawberries, and blueberries, all painstakingly grabbed with ice tongs! After breakfast we moved to the student union where the ceremony began. After lots of waiting we all found out where we would be going. About half the class is staying here. We had a couple going to Utah, a girl going to NYU (she was SO excited, jumping in the air!), a guy going to John's Hopkins, a girl going to Mayo Clinic, a guy going to Duke. I am going to be staying here at Blair E. Batson Children's hospital along with three other people from my class (and eight other people from elsewhere)... 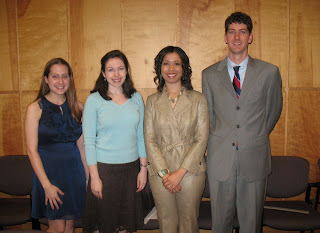 Sarah, me, Yakela, and Josh. After the ceremony my family went to Walker's Drive-In for lunch. They are known for their grilled redfish sandwich, which my dad got. 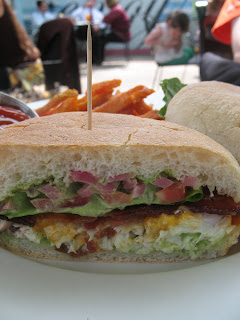 It has the fish, red onion, cheddar, bacon, avacado, aioli, and is served with sweet potato fries. Philip and Kenna got the hamburger. 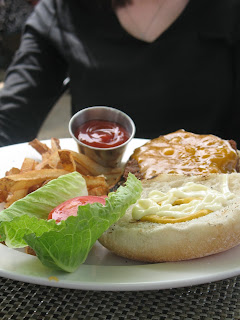 Kenna had cheddar on hers. Philip got bacon and pepper jack cheese. Mama got the turkey sandwich 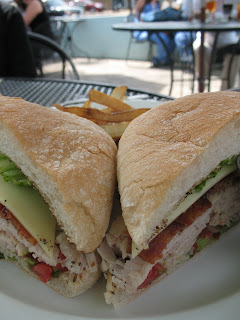 It had avacado, pepper jack cheese, tomato, and aioli. I got a grilled chicken salad (after pondering the redfish vs. veggie sandwich - both of which I've had before) that I've never had before. 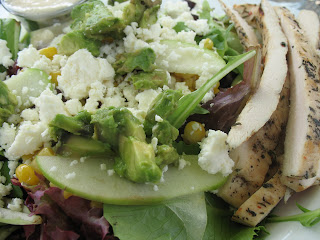 It had green apple, dried cherries, feta, roasted corn, avacado, and grilled chicken on top of field greens with a lemon vinegarette. Very good! I think that some red onion would have made it perfect...and maybe a piece of focaccia. We enjoyed good weather, good food, and good fellowship! 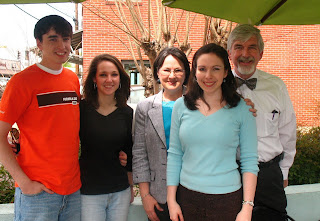 congrats on being matched with such a great hospital for a WONDERFUL residency experience!

Hi Claire! Congratulations on Blair Batson--I used to spend a lot of time there when I worked at the Make-A-Wish Foundation, and it seems like a wonderful place to do a residency. I didn't know you wanted to do pediatrics--are you interested in a particular specialty? I'm also glad to hear you had some great food to celebrate :) Walker's is one of our favorite places to visit when we're in town. Oh, and when eggplants are in season, you should totally try the soup--people never guess what's in it, and it's really yummy. Glad to hear things are well; good luck finishing up!

Congratulations! The whole event sounds really exciting! Gosh, residency assignments must mean that the official title of M.D. is just around the corner- how cool!

Looks like a fantastic day of food ... and that redfish sounds delicious!

Woo hoo - off to the next adventure. Are you excited? Was that your first choice?

Congrats on Blair Batson for your residency! It's pretty exciting when everyone is finding out at the same time where they will be.
The food sounds pretty fine, too.

Congrats on your match! How fun to be staying there at Batson. I've got to go to Walker's sometime, I hear such good things about it. All the food looks good and a good pic of your family!

Congrats on your residency! That's a great hospital..and that party food looks amazing! Soon I'll have to address you as DR. YummyFood in the comment section..lol

Congrats to you! I wish you were coming to Utah though:) Looks like a fun night!

Congratulations on your match, Claire! I know you're going to be great!

Jennifer - It is...I'm looking forward to it. Right now, I think I just want to do general peds; however, if I get into residency and find something else that I love, I'd consider specializing. I tend to forget about Walker's...need to go there more!

Cate - Such fun and good food...the redfish is the BEST!

Paula - Yes, it was my first choice!

Elle - It's a day full of excitement.

Gail - You TOTALLY need to go to Walker's...it's wonderful!

Maria - Thanks! It was fun...can't wait for our long coat ceremony!