This girl is really excited! In just a few minutes I will leave with my friend to go see the Andrew Lloyd Webber musical "Jesus Christ Superstar." SO excited. But before I leave, I want to tell you a story: One cold February day, after a very late breakfast, a boy walked up to his mom and moaned "What's for lunch." She and her daughter made several suggestions...grilled cheese, soup, leftover pizza...none of this pleased the boy. He was inconsolable..."What's for lunch" he moaned. As he and his mom stood at the pantry door, his eyes landed on some refried beans..."Nachos!" 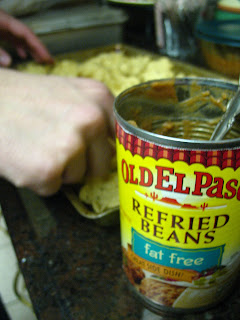 He pulled out the chips from the bag as his mom sliced some tomatoes. Next he spooned some refried beans into each chip...very meticulously! 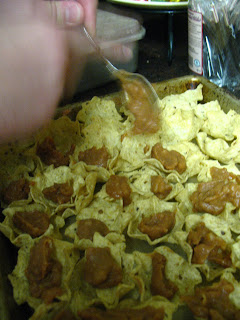 Following the beans went some taco meat (which him mom had very smartly frozen from a previous meal. 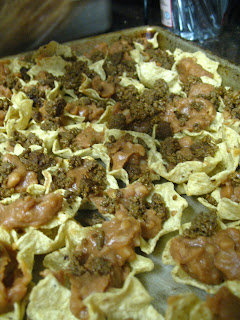 Then some cheese, both the processed variety, melted, and the sliced variety. Then jalapenos and tomatoes...seems like this boy has done this before! 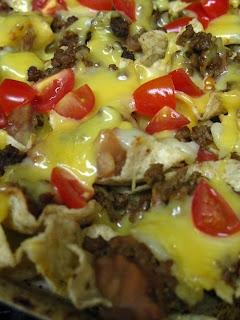 Into the oven they went until the cheese was melted and warm! Now the boy doesn't like many extras, but his mom and dad added some sour cream to theirs... 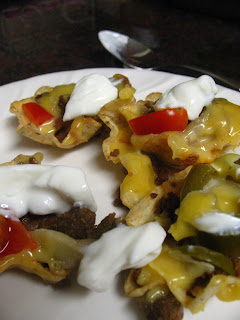 seems like the perfect Saturday snunch (that would be snack and lunch combined...what else can you call it when you eat at 3:30?!). He was proud of himself and all enjoyed his efforts! 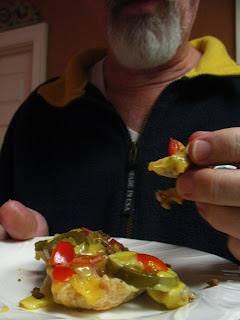 Obviously, you can tailor this to your tastes by adding or removing or modifying ingredients.
Posted by Unknown at 6:09 PM

We love nachos here!
Happy Birthday to your brother.
:)