Every year I like to take Christmas tins and fill them with yummy goodies to give to my friends. 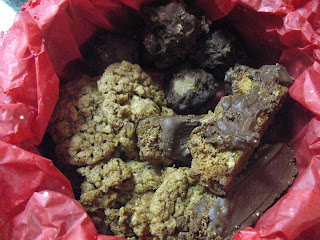 This year, I had quite an adventure doing these this year! Two of my treats failed! I tried to make some mint chocolate thumbprints; however, the cookies basically fell apart...hard to put a filling in a cookie that falls apart! The other failure was pumpkin fudge. All of the recipes I saw were a bit too involved than I wanted, so I just took a peanut butter fudge recipe and swapped the PB for pumpkin. Ummm...yeah, didn't work! I guess I needed to do less pumpkin than there was PB. It NEVER solidified like fudge should. Even when I tried to rescue it by making bark it never solidified...even in the freezer! Oh, well.

The three treats that ended up working were gingerbread biscotti, some holiday oatmeal cookies, and cake bonbons. The first recipe I'll share is the cake bonbons. 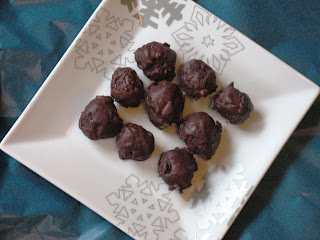 These are a very versatile treat. Basically you take a cake mix (yep, this is semi-homemade!) and bake as instructed. Then instead of icing the cake you stir the cake (crumbled) with the icing, make balls, and cover in a chocolate. 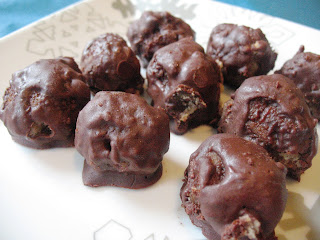 Turned out great! I used butter pecan cake mix with coconut pecan icing. The flavor of this turned out wonderfully; however, I think a more traditional textured icing would hold together better than this one. 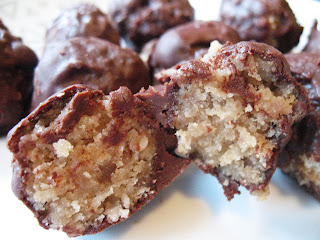 Cake BonBons
1 cake mix (made as instructed)
1 can prepared icing
melted chocolate (you might have to temper it with oil, mine seized up if I didn't)
Bake cake as instructed on box. Allow to cool slightly. Crumble cake into a bowl and stir in the entire can of icing. After washing your hands, roll the cake mix into walnut sized balls. Melt the chosen form of chocolate. Dip the balls in it and place on waxed/parchment paper and allow covering to harden.

Yum. It's good to have success after failed attempts. I hate when that happens! I've never tried the cake balls, but they sound and look good.

Great idea with the cake balls. It gives me an idea of what to do with left over cake!!
By the way, I have a pumpkin fudge recipe that I have wanted to try. It called for using a candy thermometer. I haven't tried it yet, but if you want it let me know.
Merry Christmas!

Those cake balls look so good. This is the second time in just a few weeks that I've seen those. And before that I had never seen them. I think I must try these sometime.
And when I tell you I'm going to make something that you had on your site, I usually do make it, but sometimes it takes a while.
For instance, tonight I just finished making a batch of cookies that you had on here during the summer. It's Vanilla Nut Toffee Cookies. I think you did them during the olympics. :)
The dough is now rolled up & in the frig, waiting to be sliced & baked tomorrow! Yum!
And Merry Christmas, Claire!

I like the red velvet version of these...you can make these so many ways.

Oh Claire! The vanilla nut toffee cookies were so good! I took some with us when we visited my mom, & they were a hit there too. :)
thanks a bunch!

We all have our share of failed attempts I'm sure. These look fantastic, though.

If you let the balls freeze first then use melted bark instead of chocolate it works better for dipping ;) They are D-LISH!

Katrina - I was NOT having a good couple of days in the kitchen there! At least some things worked!

Annie - I actually just got a candy thermometer in my stocking, so I could do this one! :-)

Peabody - I forgot about that one! My mom and dad had it at a wedding.

Jude - We do...and I think that we should even share them!

Jana - Yeah, I think I saw that in a recipe AFTER I had made these. It would definitely help. As to the almond bark...I was just lazy and didn't want to get it! :-)