My days have gotten messed up with having Labor day off. I just realized that today is Tuesday and that means ARF! I don't want to miss that. Head over to Sweetnicks and check out the other great entries. Last week, my grocery store finally put tilapia on sale, for a whole dollar cheaper. 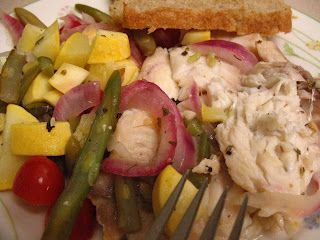 I had my eye on a recipe from the July issue of Eating Well. It's meant for the grill but you can do it in the oven. This is my slightly modified version. 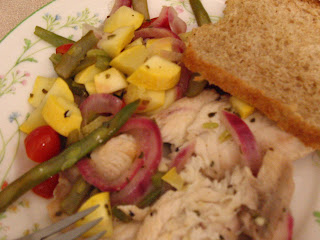 Tilapia and Summer Vegetable Packets
halved cherry or grape tomatoes (calls for 1 cup, use what you want)
1 cup diced summer squash
1 cup thinly sliced red onion
12 green beans, trimmed and cut into 1-inch pieces (we had some leftover from earlier, so I just used those)
1/4 cup pitted olived coarsely chopped (I didn't do this)
2 T lemon juice
1 T chopped fresh oregano (I didn't use this, didn't have it)
1 T olive oil
1 teaspoon capers, rinsed (didn't use this)
1/2 teaspoon salt
1/2 teaspoon teaspoon freshly ground pepper
1 pound tilapia fliets
Preheat oven to 425 degrees F. If using fresh green beans, microwave for 30 seconds. Drain and add to the other vegetables. Add lemon juice, oregano, salt, oil, capers, and some pepper in a large bowl. Lay some foil out in a double layer. Place fish on the foil and sprinkle with some salt and pepper. Top with some of the veggie mixture. 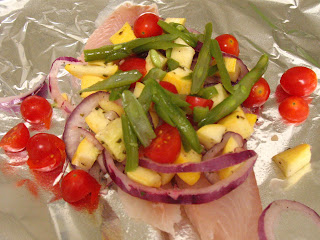 Fold foil up to the middle, leaving enough room for the packet to steam. 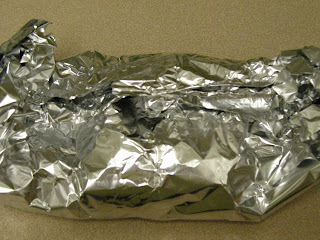 Place packets on oven rack and cook until fish is cooked through. It says about 20 minutes but mine was more like 25. As a note, you can really put the veggies you want. If you don't like tomatoes, like my roomie, leave them out! 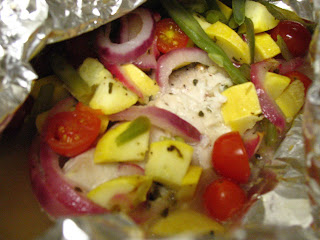 You're on a roll at tempting my tastebuds Claire! We made fish packets camping of all places- they work pretty well over a fire too.

Yummy! I love fish, but unfortunately, my better half is still on his no-fish unless it's fried kick. Argh. This looks delicious to me! I'd have to leave the tomatoes out, though :)

Hope you have a great week!!!

Looks so good and healthy! I just love cooking in packets!

Tomatoes make everything better! This looks like a good way to do tilapia and I may have done this before but had forgotten. So think I'll try it soon...wonder if you could use frozen whole green beans, thawed or frozen? Or just stick to fresh?

This looks yummy, Claire! Wish I could get my family to eat fish.

i am definitely going to try this! it looks lovely.

Eating Well is my favorite food magazine! This is such a versatile recipe too

Thanks for demonstrating how to make the fish packets. It's such a great idea.

I've never tried tilapia. That looks so delicious and healthy. I have always wanted to try the foil packets, it seems so easy and mess free!

Stacy - too bad...you could try this one night when he grills something else...you use fish! :-)

Janet - It is great...this is the first time I've cooking in a packet.

gail - i agree! I don't understand people who don't like tomatoes. frozen would probably work fine, mine weren't fresh.

kate - i thought the magazine was pretty good.

Annie - oh, PLEASE try tilapia. It's my favorite fish. not fish at all and So good, in taste and for you.