My parents moved to TN a year ago after living in the same town in MS all of my life...23 years! My mom had grown up in the same town, so she had lived there all her life (minus 8 years) as well. Let's just say, it's been a big transition. The biggest adjustment has been making new friends. It's hard enough when you, let's say, go to college...but imagine moving when both of your children are in college or graduate school. Really different. Well, my parents have been super blessed and found a great church. At this church, a little girl named Lily attached herself to my dad! 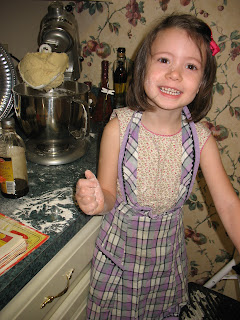 It's a really fun relationship that they have and I can't wait until I have a little girl so he can be a great grandad (and mama and wonderful grandmom)...ANYWAY! Lily loves Daddy (who apparently is "Miss Alice's (my mom) wife), she told her dad, after noticing a bow on her dress, "Dr. Bill wears bows, too!" You see, Daddy always wears bow ties! Since attaching to Daddy, Lily has also warmed up to Mama. So, when Lily's birthday came around last week, Mama wanted to do something fun with her. 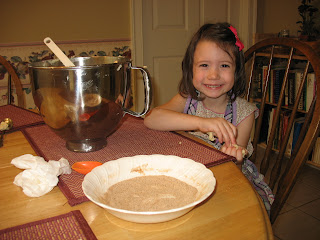 I suggested making cookies...snickerdoodles in fact. You see, I don't remember this, but we have a picture of me making snickerdoodles with Mama when I was about two or three (don't you love my styling shirt! Yep, that's me!). 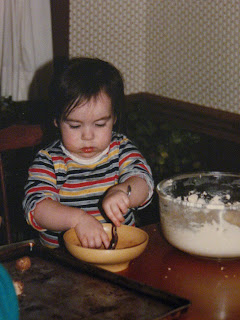 They are great cookies for little hands and SO much fun. I think Lily really enjoyed her birthday treat, which included making cookies, watching Charlotte's Web, and going for ice cream along with her brother, Eliott. 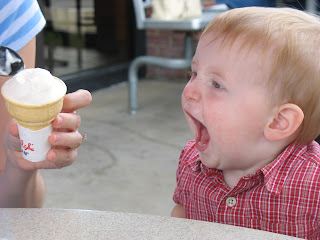 So, if you have little kids, grandkids, or just a special friend that you want to have some fun with....make cookie memories with them! 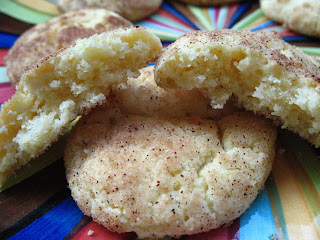 Preheat to 375 F. Mix butter, sugar, eggs, vanilla and milk. Blend in dry ingredients. Shape dough into balls. Mix remaining sugar and cinnamon together (you probably will need more than this). Roll balls in mixture. 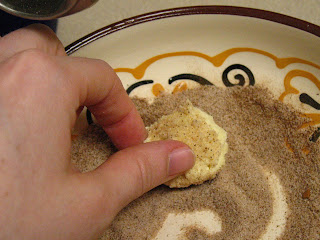 Place on a cooking sheet or stone and bake for 8 minutes or until set. Don't let them brown too much or they'll get hard. Immediately remove from baking sheet. 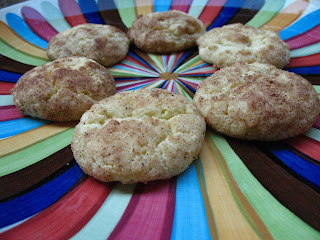 If you don't feel like you have time for this, try using a cinnamon swirl cake mix. It has a separate cinnamon sugar mixture in it. All you have to do it add 1/3 cup oil and 2 eggs to the cake mix and stir. The roll balls of the dough in the provided cinnamon mixture and cook as directed above (except probably at 350.). Above all, HAVE FUN and be sure to take pictures...it make make a memory for someone later! 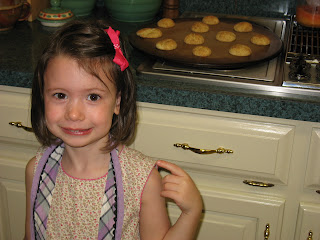 If you recognize this plate, it is a Gail Pitman plate. She is a local potter in Jackson, MS and Paul Dean uses these plates on her show!!!!!!
Posted by Unknown at 7:27 PM

That's so sweet, Claire (and yeah, I love the shirt - you should see some of my shockers from my very '70's childhood!). The offspring and I do lots of cooking together but Offspring #1's favourite is when we make cookies and he gets to help roll them. Offspring #2 really likes mixing stuff at the moment - very energetically!

I will be sure to pass along this recipe. My daughter loves to bake with her Grammy. She gets so proud when she gets to share what she has made.

It is so sweet of your parents to adopt Lily. Sharing time like that can really make a difference in a childs life. The memories they make with her will last a lifetime.

My favorite cookie!
Look at how adorable you were!

You were a cutie! Lily and her brother are so sweet, and those cookies looks mouth watering!

Looks like everyone had a good time -- mmmm, love snickerdoodles.

How fun, Claire. You're right ... every child should have memories of baking cookies.

RDM - It's so funny to me that the styles from when I was little are coming back...tapered jeans, slip on shoes...! I love that your kids like cooking with you. YAY!

Linda - It's a great one. Sometimes, I think the dough is a little too sticky. You can remedy that by leaving the milk out. I hope she and Grammy enjoy it. I'm glad that my parents have enjoyed Lily...sad that her family is moving sometime this year.

Annie - Aren't they cute! You should try the cookies some time.

Cate - I think they did. I bet Nicholas and the girlfriend would have fun making these.

Claire. Looking at that picture reminded me that we were a pair with some serious cheek action going on!

What a cute little girl! It must be fun for your parents to have a little one around, especially since you're far away. You were super-cute too :) Snicker doodles bring back great memories -- I have loved these cookies almost my whole life!

Sarah - We sure did! In fact, that was how I described the picture to Mama when I was asking her about it. She liked to call them "pinchable!"

Jennifer - Thanks! They are definitely enjoying her. These, I think, are the first cookies I made all by myself...when we lived overseas, none-the-less. There we had to buy butter by the pound, sugar and flour by the bag, and have leaveners shipped to us from the US. It was great fun!

Ooooh, Snickerdoodles! I hadn't had them in years, but your post reminded me of how much I like them. So on Sunday I corralled my Rugrat and we spent a very pleasant afternoon rolling cookie dough balls in cinnamon sugar. Thanks for the inspiration!

Snarkmeister - I'm glad that you had such a good afternoon with you little one! :-)

All of the kiddies are cute-including you! That's so cool that you have a picture of yourself, younger, cooking. You were a budding chef.
I looove skickerdoodles; would love to make some soon.