Tonight we had friends over for dinner (January dinner - done!). We had an old "favorite" from my childhood - chicken roll ups. Had a little problem with the oven, however. After about 10 minutes, it started smelling like scorched bread. My roommate came and told me the oven was burning the cheese. Um...the dish was BOILING and the element of the oven was FIRE RED. We turned the oven off and took the rolls out to pick off the burnt part. I put them on the lower rack next time...five minutes later, boiling AGAIN and the lower element was FIRE RED. So, we stood guard for the rest of the cooking time. It tasted just fine and our guested enjoyed it. Later I baked bread and the oven behaved. I have NO CLUE what was the problem. I may still report it to the manager at my apartment complex. Electrical crews are on site this week, so maybe they can come check it out just to be safe. 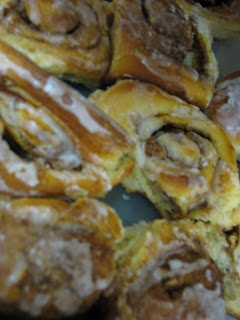 Anyway, at Christmas time, I decided to make cinnamon rolls for breakfast one day. My brother enjoys those and I like to endulge him! Instead of doing my regular recipe, I thought I'd try something from Dori Greenspan's book Baking from my home to yours. I found the recipe she used for her pecan rolls and decided to use that. After following the first part of the instructions, which I wasn't sure about because it looked SO DRY, I proceeded to the next part...putting in the butter. This is what ensued:
Me: Wide eyes - "Oh, my goodnes!" (Place hand over gaped mouth)
Mom: "What?"
Me: gaped mouth..."I can't do this."
Mom: "What?"
Me: "I misread the recipe. I thought it said 2 TABLESPOONS butter...it calls for 3 STICKS of butter. I can't do this. What do I do? Do I just make it or do I throw away what I've done and do the regular recipe?"
Several minutes of deliberation pass...
Me: "What should I do? Should I make it?"
Daddy: "Just do it."
Me: "I guess this is really the only time I'll do it, and then I can say I've made brioche. Okay, I'm doing it."
It just went against all I have in me to use 3 STICKS of butter. However, that was the prettiest bread dough I've ever seen. It was SO smooth...smooth as butter! I used the dought to make cinnamon rolls and one loaf of brioche. The cinnamon rolls were VERY good but I wasn't thrilled about the brioche. Daddy liked it though. He said it was very good and didn't need extra butter on top, you could taste it just in the bread. I sure hope so! Philip (the brother) said he wasn't so sure...if only it had one more stick of butter! ;-) SO, now I've made this recipe, but probably won't again unless it's for a catering something or someone asks specifically for it! 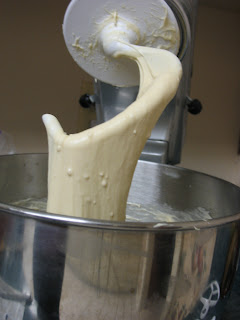 Golden Brioche Loaves
make dough one day ahead then shape and bake the next
2 packets active dry yeast (4 teaspoons)
1/3 cup just-warm-to-the-touch water
1/3 cup just-warm-to-the-touch while milk (I used skim)
3 3/4 cups all-purpose flour
2 teaspoons salt
3 large eggs, at room temperature
1/4 cup sugar
3 sticks (12 ounces) unsalted butter, at room temperature but still slightly firm
Put the yeast, water, and milk in the bowl of a stand mixer and, using a wooden spoon, stir until the yeast is dissolved. Add the flour and salt, and fit the mixer with the dough hook, if you have one. Toss a kitchen towel over the mixer, covering the bowl as completely as you can to keep you from being covered in flour! Turn the mixer on and off in a few short pulses, just to dampen the flour (you can peek), then remove the towel, increase mixer speed to medium-low and mix for a minute or two. At this point you will have a dry, shaggy mess (it's true).
Scrape the sides an dbottom of the bowl with a rubber spatula, set the mixer to low and add the eggs, followed by the sugar. Increase the mixer speed to medium and beat for about 3 minutes, until the dough forms a ball. Reduce speed to low and add the butter in 2 Tablespoon size chunks, beating until each piece is almost incorporated before adding the next. You'll have a dough that is very soft, almost like a batter. Increase the speed to medium-high and continue to beat until the dough pulls away from the sides of the bowl, about 10 minutes (This made my heavy kitchen aid mixer "dance" across the counter, so you may want to listen and be available to steady the mixer).
Transfer the dough to a clean bowl, cover with plastic wrap and leave at room temperature until nearly doubled in size, 40-60 minutes. Deflate the dough by lifting it up around the edges and letting it fall with a slap into the bowl. Cover the bowl with plastic wrap and put it in the refrigerator. Slap the dough down in the bowl every 30 minutes until it stops rising, about 2 hours, then leave the covered dough in the refrigerator overnight.
If making Brioche loaves: Butter and flour 2 8.5 X 4.5 inch loaf pans. Pull dough from the fridge and divide into two equal pieces. Cut each piece of dough into 4 equal pieces and roll each piece into a log aobut 3.5 inches long. Arrange 4 logs crosswise in the bottom of each pan. Put the pans on a baking sheet lined with parchment or silicone mat, cover the pans lightly with wax paper and leave the loaves at room temperature until dough fills pans.
Preheat oven to 400 degrees F. Bake until loaves are well risen and deeply golden, about 30-35 minutes. Cool for 15 minutes, then run a knife around the sides of the pans and turn the loaves out onto cooling racks. Cool at least one hour. 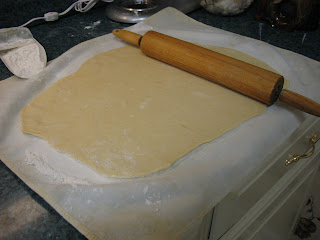 If making cinnamon rolls: Divide dough into halves. Roll one half into a 16-inch square. Spread 3 tablespoons softened butter over the dough. Sprinkle a mixture of 1/4 cup sugar, 3 T brown sugar, and 1 T cinnamon over the dough. Add nuts if desired. Roll dough jelly-roll style. Cut dough using serrated knife or sewing thread, into 1-inch rolls. Place in a greased 13X9 pan. Cover and allow to rise until doubled in size. Bake in a 375 degree F oven for about 30 minutes or until puffed and browned. Make a glad of confectioner's sugar and water. Spread over rolls and enjoy.
Posted by Unknown at 10:23 PM

what? only three sticks? I read three pounds! ;) just kidding. that 's a lot of butter!! :) Maybe that's why I've never made cinnamon-pecan rolls, as much as I love them. Knowing what's in them would give me a heart attack before I even sank my teeth into them!

Kudos to you for making brioche. :)

I love Dorie, I love that book, but when I read about the cinnamon pecan roll recipe I wasn't sure if I could do it either... I probably will, eventually, because I think I will end up making every recipe in that book.

Those pictures look great, but good grief, I don't think I could ever bring myself to make something with 3 sticks of butter. I sputter and spew at Paula Deen's recipes that have one whole stick in them :)

Weird about your oven... hope you get it fixed. Mine acts up too, but never that bad. I make a sort of chicken roll up too but haven't made them in ages. Need to put them on the menu soon, thanks :)

Isn't butter what good baking is all about? :-) Okay, I'm pretty sure I would have gasped at 3 sticks of butter too. But, I've made pound cake that takes a whole pound of butter before so I guess it's just the shock of it initially. (And I know you like to cook and bake healthy)

Hope your oven is back to normal and doesn't give you fits anymore. Probably a good idea to have it checked out anyway.

VC - :-) It is a lot of butter. I've made cinnamon rolls before and they have NEVER called for that much and are still good.

Brilynn - I have trouble deciding what to make. I would have done the pecan roll part but we didn't have all the ingredients for the caramel part, so I just iced them.

Stacy - I do the same thing with Paula Deen. A lot of her recipes could be done without all that butter, excluding gooey butter cakes! The chicken roll-ups still tasted fine, the just weren't pretty.

Alisha - You're right, I do like to try and cook healthfully. That is why I went ahead and made these when there would for sure be people to eat them! :-) I'm going to test the oven out this weekend and if it messes up again I'll for sure report it.

What didn't you like about the bread...just too much butter?

Peabody - Honestly, I think it's because I had the heel of the loaf. My piece was a little dry and that was the problem. My dad said it was really good and I trust him. I think it would be really good bread to use for French Toast.