We decided, well, I guess I decided, a while back that K's party this year would be a cupcake party.  I thought it sounded SO much fun to make cupcakes and have every child decorate their own.  K went for it as she loves making cupcakes! 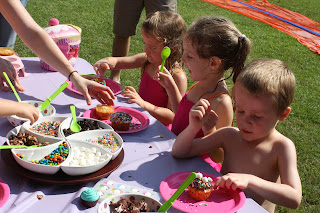 However, when I asked her what flavor she wanted "cotton candy" was her answer. Um, not quite sure how to make cotton candy cupcakes...so I went with funfetti.  :-) 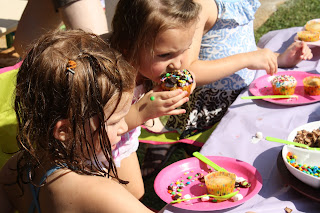 I figured it would be pretty easy and it was.  I used this recipe though the first batch I used shortening and the second butter.  They were pretty good but a little heavier than a cake mix cupcake. 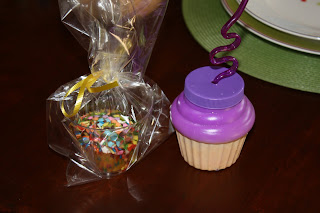 In order to send home a cupcake with each child, simply get clear punch cups, put the cupcake in the cup, and the cup in a clear treat bag, then tie with a ribbon.  Easy and cheaper than cupcake boxes.  For favors, I made cupcake candy jars!  A pinterest idea that was such fun. 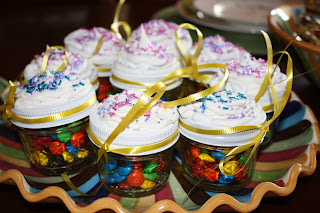 Get the 4 oz. ball glass jars, super glue the lid to the ring, pain that white.  Then "swirl" caulk on top like icing, sprinkle with small "jems" and put candy in them.  Such fun!  All in all, an easy party (though I did spend five hours beforehand cleaning house! and was exhausted after the party).

Instructions
Posted by Unknown at 9:57 PM

These look yummy! Thanks for sharing with us!