My church had its Christmas music last weekend.  It was a great time of worship and giving glory to God!  So thankful that in Jesus, He gave us everything we need to satisfy our hearts!  Follow the example of the wisemen.  They "had it all," wealth, wisdom, prestige...and they gave it all to worship Jesus, the One who could satisfy their souls, forgive sins, and redeem them! 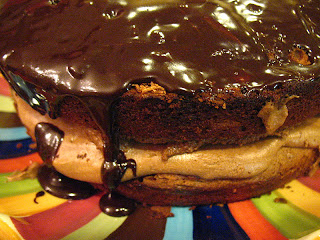 After the music, my Sunday School class had a Christmas party.  Mr. Randy made eye round, and no, I'm not joshin' you (sorry, inside joke!); and we put together a potato and salad bar.  Everyone brought something for the salad/potato bar and/or dessert.  Being typical Claire, I went in search of a new recipe to try!  I didn't have to go far, though.  I actually used one of the recipes that I had saved in my e-mail.  It's for a triple chocolate cake, and, unbeknownst to me, was from Cooking Light.  It was fairly simple to put together, though I think I did rush it some.  I should have let the filling chill overnight before putting the cake together.  When I got up on Sunday morning the top layer had slid off the bottom one.  Sigh!  Thankfully, it went back fairly easily.  I think that topping it with a ganache gives the cake an elegant appearance, enabling you to see the filling as well.  The cake was pretty good but I thought it was a tad dry...though that could be because I chose the longer cooking time, afraid it wasn't done at first check.  The filling, however, added moisture to the overall cake.  So, if you're looking for a good option for a lower guilt dessert, try this one.  I think everyone enjoyed it!  I mean, I sent several people home with leftovers. :-) 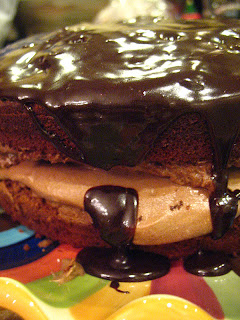 Preheat oven to 350 degrees.  Combine boiling water and cocoa.  Add 2 oz. bittersweet chocolate and stir until mixture becomes smooth.  Cool to room temperature.  In a large mixing bowl, put the sugar, butter, and vanilla and beat for 1 minute.  Add egg whites, one at a time, beating between each addition. Add sour cream/yogurt, then beat for 2 minutes more.  Combine the flour, baking powder, soda and salt.  Add the flour mixture and cocoa mixture alternating - being and end with the flour mixture.

Spray two round cake pans with cooking spray.  I used Pam with flour (for the first time...it's pretty cool!).  Divide the batter between the two pans.  Drop each pan on the countertop to allow air bubbles to rise to the top.  Bake for about 30 minutes or until a toothpick in the center comes out clean.  Cool for 10 minutes, then remove from pan and allow to completely cool on cooling racks.

Combine milk, sugar, cornstarch together in a saucepan over medium heat.  Stir constantly until mixture comes to a boil.  Remove from heat and add the chocolate.  Stir until mixture becomes smooth.  Cover and chill.  When cooled, uncover and fold in the cool whip.

To assemble cake, place one layer of cake on cake plate.  Spread filling on top of this layer with 1/4 inch border.  Place second layer on top.  Then pour glaze on top, spreading it so that it covers the top of the cake and drizzles down the sides.  Enjoy!
Posted by Unknown at 3:21 PM

Quickly went to the top of my "to cook" list! YUM!