Right after Thanksgiving, we had a few days of cold.  Guess what I made...SOUP!  Today, I'd have to pretend it was cold...yet again (though it is supposed to be COLD on Tuesday!) but this soup was quite good...even enjoyed by a toddler.  Woo Hoo!  I saw the recipe from Jenna several months ago and have had it bookmarked for a while.  When I made the potato soup, I thought about doing this one but realized that I wouldn't have time.  This last week, however, was the perfect time to go for it. I was on my last few days of elective, i.e., getting out early, and it was cold.  So, when D asked what I was doing, I offered to share my soup...aren't I nice?!  ;-) 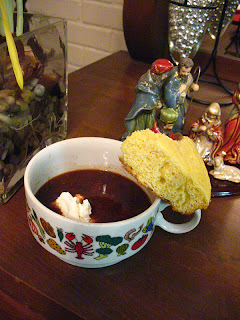 First let me say, without realizing it, I modified this recipe A LOT!  I didn't have any onions, so I completely skipped step one.  Then I assumed that it was just a throw it all in kind of recipe.  Basically, it is; but, if you have onions, check out the original recipe here.  At first, I was a little concerned.  It has 2 tablespoons of chili powder in it, and I thought that it tasted a little too acidic. 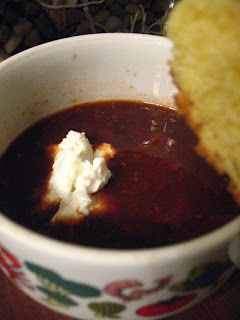 I will say, however, that it did mellow and gain quite a good flavor over time. I served mine with cornbread.  When I put it in her bowl, K immediately put her spoon in and ate some.  "Yummy!  Beans!"  Score!  D said he liked it too and saved some leftovers for later.  I did think that it was more of a soup than a chili, so I've changed the title.  If you want a nice warm soup with a little spice, but not too much, try this soup!  Delicious, filling, and healthy! 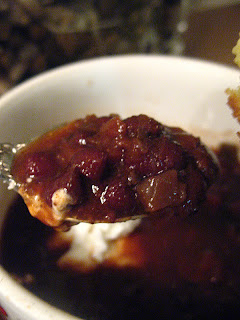 
In a large stock pot, place all ingredients.  Stir well. Bring to a boil, then simmer for 3 hours.  Serve chili with grated cheese and sour cream.
Yield: 4 servings
Posted by Unknown at 8:52 PM

om gosh- LOVE black bean soup! And cornbread is the perfect side- yum!

That looks super easy and yummy! I love black bean soup - I'll have to give it a try :)

This sounds AMAZING. And yes maam I am thoroughly enjoying wards (not so much the incessant asthma cough that tells me I'm not yet immune to all the baby bugs). Wish I didn't have to do that other "grown-up stuff" at all!

Comfort Winter food at it's best! Looks amazing, Claire. I always let stews and soups sit overnight covered in the fridge, before serving them, as the flavors blend and any flavor or feel that stands out too much - mellows, like yours. Will definitely try this!