One week left!  That's it and I'm DONE with nights.  Yes, I'll still have some night shifts in the ER and some overnight calls but my MONTH of nights will be done after 4 more shifts.  Whew.  Hasn't been as bad as I was thinking it would be.  I definitely have not done any cooking.  But tonight, I'm throwing together a spaghetti squash concoction!  YES!  Though I do miss the summer veggies when fall come, I really enjoy the spaghetti squash that comes with fall.  However, today's recipe has nothing to do with spaghetti squash...it is another stuffed recipe.  Apparently, last month was all about stuffed veggies. 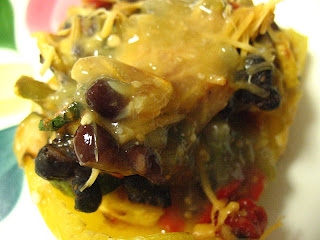 I had a bottle of Verde sauce that I bought on clearance sitting in my cabinet.  I decided to use it, instead of tomatoes, for the base of stuffed peppers.  Oh my!  This turned out SO good.  There was a nice spice and "twang" to the sauce.  It made for several yummy meals!  For the filling, I used a bag of frozen fajita veggies (onions and bell peppers), zucchini, squash, and black beans. 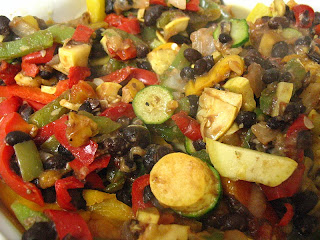 I added a little salsa for some spice and tomato flavor.  Topped with just a sprinkle of cheese and it was perfect! 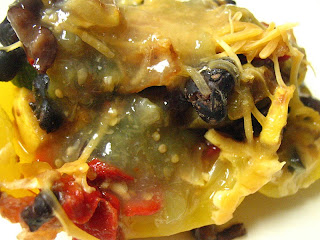 Bring a pot of water to a boil.  Place halved peppers in the water and parboil for 10 minutes.  While they are cooking, saute fajita veggies, squash, and zucchini in a saute pan until softened.  Add beans and salsa  Cook until warmed through.  Remove bell pepper from water and allow to drain.  When drained, gather a casserole dish large enough to hold all peppers.  Pour the sauce in the bottom of the pan.  Place all peppers cut side up in the dish.  Fill each pepper with the bean and vegetable filling, you might have some left over - great on salad!  Top each pepper with a sprinkle of cheese.  Place in oven that has been preheated to 325.  Bake for 20-25 minutes or until cheese melts.  Remove from oven and enjoy!
Posted by Unknown at 7:15 PM

Yum! And congrats on done with nights soooon. Are you on wards in Dec/Jan? I can't wait to get over to yall - electives in Nov (genetics + palliative), then general peds in Dec & Jan.

A BIG congrats to you!!! Whoop whoop to the end of nights. I do love winter squashes. Spaghetti is yummy, but Acorn is my favorite. I picked up a carnival for this week (never had one before). What a delicious recipe