Went to see The Help yesterday with a friend.  It was good; made me want to re-read the book.  It was also really neat to see some of the locations that I see daily on the movie screen!  Yep, any of the town scenes that you saw were my neck of the woods; I see those places, albeit changed some to make it more appropriate for the time of the move, daily.  After the movie, we went back to K's house and went swimming. Despite the water being 94 degrees it was still enjoyable.  After that, I decided to come home and make stuffed eggplant.  I must admit, some of my inspiration came from Meghann, but I have always wanted to try this. 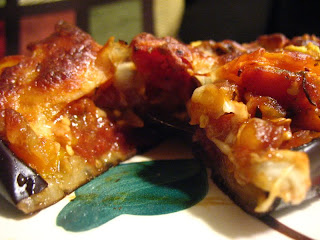 OH!  It is SOOO good!  The total recipe probably takes about 40 minutes but hands on time is only about 15 minutes. 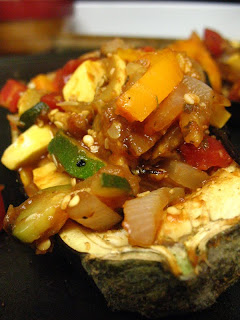 I chose to have a completely veggie filling, but you could easily add some ground meat, shredded chicken, shrimp, tofu, tempeh, etc.  You could even add beans (I almost did this) or couscous, tabouleh, bulgher...the possibilities are endless!  Please, just try it!  I don't think you'll regret it! 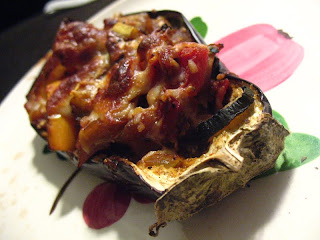 Preheat oven to 425 degrees.  Cut eggplant in half.  Scoop out the center meat of the eggplant. 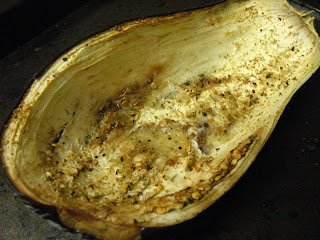 Chop this and put it in a skillet.  Season the flesh of the eggplant halves (I used garlic and herb Mrs. Dash) and place in oven.  Bake for 20 minutes. 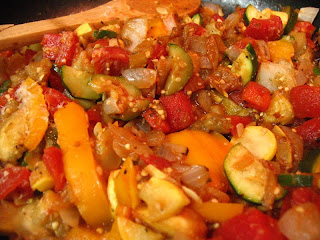 Meanwhile, cook remaining eggplant meat, onions, pepper, squash, garlic, and zucchini in a skillet until softened.  This took about 12-13 minutes for me.  Season with Cavenders and Mrs. Dash.  A couple of minutes before the eggplant halves come out of the oven, add the diced tomatoes. 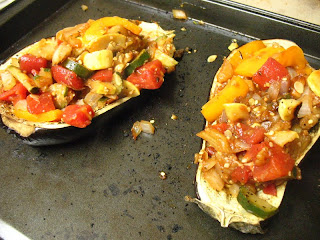 Remove eggplant halves from the oven.  Fill with veggie mixture.  This used about half of mine.  Top with cheese.  Bake in oven for 15 minutes or until cheese is browned.  Use remaining filling for whatever repurposed meal you choose!  Enjoy! 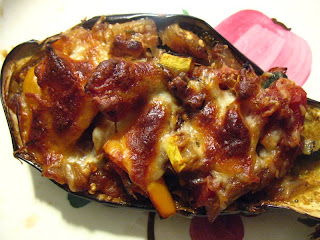 I've actually been eating more vegetarian on this round of dieting.

Can't wait to try this. Did a very similar stuffed veggie with yellow squash a few weeks ago. Will try an eggplant soon. Thanks for the inspiration.

That looks like a completely filling and tummy-warming meal, bookmarking.