Today would normally be my Eat. Live. Be. post.  Outside of last Monday, I have posted every Monday since the first one of the year.  That is seven months of Monday posts.  I do like having some sort of event making me post.  However, I think all of us Eat. Live. Be-ers are running out of steam.  So, we're changing things up!  Instead of weekly posts, we will be doing monthly posts.  Hopefully, that doesn't mean my posts will be less...it just means they will occur on different days. 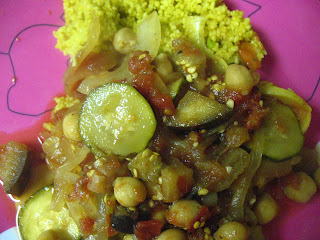 If you'll remember, my goal was to cook at least twice a month.  I did a pretty good job through May, but last month just caught up with me...and this month, well, let's just say that I finally had a day off where the whole day was a "me" day.  I have made a yummy looking veggie/pasta salad that I'll be sharing with you soon...it's just too good to keep to myself!  Maybe I'll even make something else a little later before I go to my church's prayer conference.  THAT is a refreshing thing in the middle of my busy NICU month...my LAST NICU month.  I'm kind of sad about that, will miss those sweet babies.  I've had several people say maybe I should just do NICU, but I feel like I'd miss those sweet toddlers and five year-olds, too.  Guess I like to change things up! 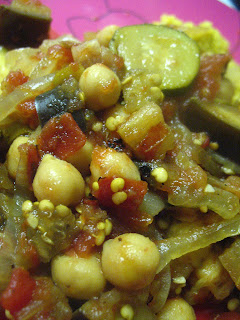 Anyway, I made this dish a couple of months ago.  It was pretty good but I didn't have any curry paste; so, I changed things up and just used dried curry powder.  Unfortunately, the tomatoes that I used were spicy, so I couldn't really taste the curry.  Overall, it was a tasty dish.  Miss Rachael Ray did a good job on this one.  She served it with lemon rice, but I used couscous. 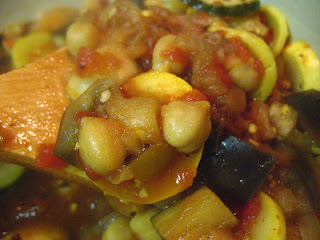 Looks yummy! Lots of veggies which is awesome! RR has some great ideas. I always tweak her recipes just a bit too!