...when you are on a busy wards month and don't have much time to do anything else!  Wow, the 27th really crept up on me.  Plus, I thought that it was on Saturday.  Ooops!  It's time to post my Daring Baker's Challenge and it's not done yet.  I had planned to make it tomorrow...but started tonight 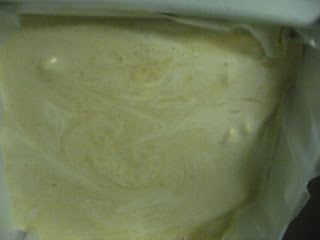 though it is now in the freezer and won't be finished until tomorrow and not eaten (maybe) until Monday!  The May 2011 Daring Bakers’ challenge was hosted by Emma of CookCraftGrow and Jenny of Purple House Dirt. They chose to challenge everyone to make a Chocolate Marquise. The inspiration for this recipe comes from a dessert they prepared at a restaurant in Seattle.

I thought that maybe I'd have a reason to make this for friends this month as one friend will be soon going overseas for two years to minister to and share Jesus' love and salvation with others!  I love Michelle much and will miss her encouraging presence these next two years.  Anyway, I thought we were going to have a party for her, but that did not end up happening.  In all these plans, I decided that I would make a peanut butter version instead of chocolate.  The spice that I used was cinnamon...cinnamon and peanut butter just work!  I tasted the unfrozen version and it was pretty good!  Hopefully the finished version will be as good.  I shared some pictures with Sarah and told her that I was bringing it on Monday when we get together.  If I remember correctly, her husband Jason really likes peanut butter...hopefully, he'll like this!  I will update when I have pictures and report on the flavor.  Check here for other Chocolate Marquise delights!!!  Recipe and pictures to come.
Posted by Unknown at 9:18 PM