I'm back with the results of the May Daring Baker Challenge.  If you'll remember from here:  The May 2011 Daring Bakers’ challenge was hosted by Emma of CookCraftGrow and Jenny of Purple House Dirt. They chose to challenge everyone to make a Chocolate Marquise. The inspiration for this recipe comes from a dessert they prepared at a restaurant in Seattle...and I was just putting it in the freezer on the post date.  But I did finish and last night revealed it at a little get together at Sarah's house.  I remembered that Jason likes peanut butter stuff and I thought he might like this.  Before I left for her house, I put to gether the meringue and, instead of using my oh so handy blow torch (that I don't have!) I made pillows of meringue and baked them. 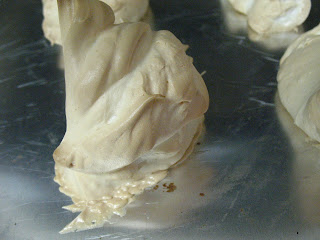 Not sure if that had an effect on the taste, but this was a VERY eggy meringue.  I thought the process of making it was kind of fun (hands on!) but didn't really like the resulting taste.  Maybe I whipped it too much as it was thick and not very airy...the way I like my meringue.  I added some chocolate sauce and caramel sauce and we were ready to go.  Results? 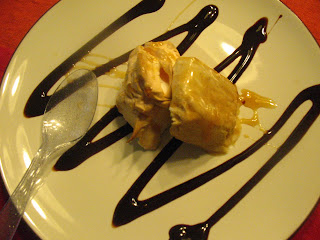 Jason doesn't like meringue....period!  But he said that the peanut butter part was pretty good...even had seconds!  I left the remainder for him to eat...hopefully they don't forget about it.  Glad I finished the challenge even if it was late!  I used the quartered recipes that Audie provided and changed the chocolate to peanut butter...all worked quite well. 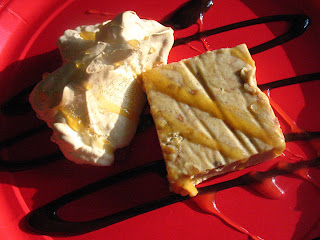 In the bowl of a stand mixer, combine the egg yolks and whole eggs. Whip on high speed until very thick and pale, about 10 - 15 minutes.


When the eggs are getting close to finishing, make a sugar syrup by combining the sugar and water in a small saucepan. Bring the syrup to a boil and then cook to softball stage (235F/115C).

With the mixer running on low speed, drizzle the sugar syrup into the fluffy eggs, trying to hit that magic spot between the mixing bowl and the whisk.  When all of the syrup has been added (do it fairly quickly), turn the mixer back on high and whip until the bowl is cool to the touch. This will take at least 10 minutes

In a separate mixing bowl, whip the heavy cream to soft peaks. Set aside.


When the egg mixture has cooled, add the chocolate base to the egg mixture and whisk to combine. Try to get it as consistent as possible without losing all of the air you've whipped into the eggs. We used the stand mixer for this, and it took about 1 minute.  Fold 1/3 of the reserved whipped cream into the chocolate mixture to loosen it, and then fold in the remaining whipped cream.  Pour into pan and place in freezer for at least 2 hours or until ready to serve.

When you're ready to plate, remove the marquise from the freezer at least 15 minutes before serving. While it's still hard, remove it from the pan by pulling on the parchment 'handles' or by flipping it over onto another piece of parchment.  Cut into squares and plate with the meringue and drizzled caramel sauce and chocolate sauce.  Garnish as desired.

Heat peanut butter and milk together.  Mix until well incorporated.  Add cinnamon, corn syrup and vanilla.  Stir together and set aside.

Place egg whites, sugar, and vinegar in a clean mixing bowl.  Mix together with your clean hands.  Place bowl over a pot of simmering water.  "Stir" with your fingers until mixture starts to warm and sugar dissolves.  Remove from water and whip with the wisk attachment of a mixer until fluffy.  Add vanilla and whip until firm.  Place dolops onto a pan and bake in oven until starting to turn golden.
Posted by Unknown at 10:19 PM

I love this variation - it's the first full peanut butter one I've seen come out of this challenge, and I'm really impressed with the texture. Nice work!

Oooh! Such a neat idea! I think peanut butter makes everything better.