Usually, the first thing that I decide on for a special occasion is dessert. For some reason, a dessert for Christmas was just not coming to me. Sure, I had LOTS of ideas of snacky type desserts but I wanted a REAL dessert. I contemplated several different things (which I will still make) but finally landed on caramel cake after talking to my mom. 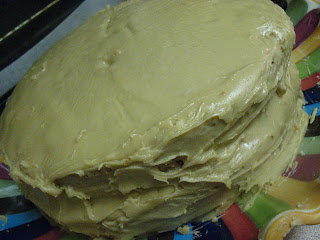 Caramel cake, I would have to say, is my family's favorite dessert. My brother had caramel cake as his groom's cake. It is just GOOD! I was really excited to finally get to make it. Enter problem...work! Over Christmas, I was on call every other night. That did not leave much time for cooking; but, I didn't think it would be a problem. Normally, call over Christmas isn't that bad...different story this year! So, when I got home, I just wanted to sleep...not make a caramel cake. My mom, thankfully, offerred to make the actual cake part. The scratch recipe she used didn't turn out (apparently, other people had trouble with it as well) so we used a cake mix. The icing, however, was fantastic!!!! 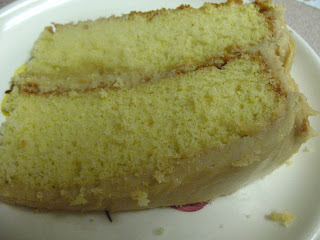 Oh my! The caramel cake we tasted originally is more of a fondant icing, but this one was perfect...even Daddy agreed after trying it. The recipe I used made 5 cups, so I halved the recipe and it turned out to be the perfect amount for a two layer round cake. I also used buttermilk instead of heavy cream. No problem...tasted great! It was even better after a couple of days because the icing had a chance to seep into the cake and created almost a simple syrup effect. So good! Somehow, I don't think anyone would complain if this became a Christmas tradition...and I would go in search of a good cake recipe! 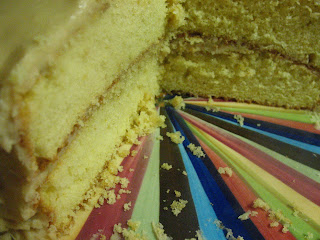 Preparation
1. Bring first 3 ingredients to a rolling boil in a 3 1/2-qt. saucepan over medium heat, whisking constantly (about 7 minutes).
2. Stir in buttermilk and bring to a boil; remove from heat. Pour into bowl of a heavy-duty electric stand mixer. Gradually beat in powdered sugar and vanilla at medium speed; beat 8 to 12 minutes or until thickened. Spread over cooled cake immediately. Enjoy!
Posted by Unknown at 8:00 AM

not sure which caramel cake recipe you used, but I'm pretty sure I remember making one a few years ago when I first started my blog - you might want to try that one next time!

At first glance, I thought this might be the Shuna Fish - Lydon caramel cake, but it looks even better! I'd definitely like to try it :) Happy New Year, Claire!

I'll bet this caramel icing might taste good on a brownie! Or on a yellow cake mix! Could you use only 1.5 cups sugar to make it less sweet?

Baking Ribbons - the problem with that is getting the right texture. I actually added a tiny bit more because it wasn't thick enough at first. I guess you could try and see what happened!