After I decided what to make for side dishes, I felt like I should provide some sort of bread but didn't have time to go to the grocery store...again, otherwise I would have just done the old standby of Sister Schubert's!  So, I pulled out my Southern Sideboards cookbook and looked up biscuits.  I mean, a cookbook with the word southern in the title HAS to have several biscuit recipes. 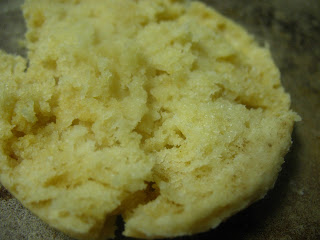 I haven't really found a recipe for biscuits that I love because I'm used to those frozen Pilsbury biscuits, which are tall and flaky.  No matter what I try, I cannot make biscuits like that...I'm not sure that they exist!  Anyway, this recipe is true to most biscuit recipes I've found and is fairly flat but it did have a nice, flaky texture.  I ended up using white whole wheat flour and enjoyed the extra wheaty flavor that it lended to the biscuits.  Try them out and let me know what you think. 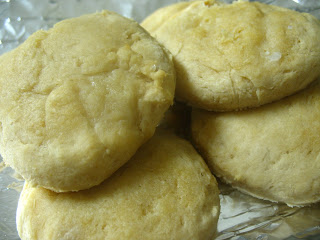 Preheat oven to 400.  Mix flour, salt, powder in a bowl.  Cut (or mash in with your fingers) shortening until it looks like meal.  Stir in milk.  Let stand for 1 minute.  Kneat on a floured board and roll out.  Cut with biscuit cutter (or a small glass!). Place on baking sheet.  Bake until golden brown.  No time was given but probably anywhere from 10-15 minutes.  Enjoy!
Posted by Unknown at 8:00 AM

I can't make biscuits. I like the Pillsbury too!