So not really...but I was really disappointed.  A couple of weeks ago I came up with a really delicious and satisfying "stoup," as Rachel Ray would say.  It was a lentil, eggplant, and spinach dish and I topped it with some tzatziki dip I had. Oh...it was SO good! 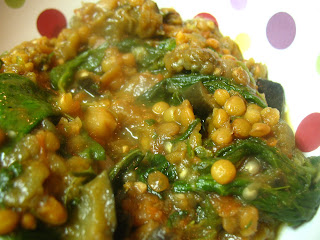 Well, I pulled it out of the refrigerator in order to put some in a container so I could take some for dinner on call.  I thought, I have to remember to put that back in the refrigerator...and then promptly forgot.  But I didn't realize it until I got home from my 30 hour call and wondered where the pot was when I looked in the refrigerator.  OH NO!  Sure enough, I looked over and there was the pot sitting on the counter. (This picture is when I made it, not from the disaster.) 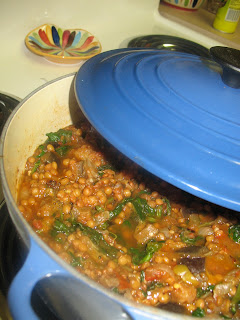 When I pulled the top off, there were a couple of fuzzy spots already developing.  Grrrr....I wasted half the dish because I forgot to put it in the refrigerator.  Oh, well!  I'll just have to make it again...because it was really good!  Try it for yourself....but remember to put it back in the refrigerator! 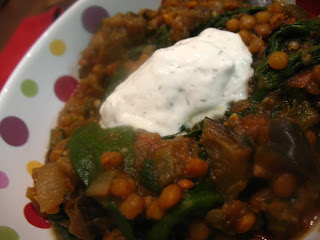 Heat a stock pot (I used my LeCruset pot).  Put a small amount of olive oil in the bottom (about 1 T).  When heated, put onion, garlic, and eggplant in the pot.  Season with Cavender's.  Cook for 7-8 minutes or until eggplant is softened.  Put lentils and broth in the pot.  The broth should just cover everything.  If you need a little more broth, that is fine.  Put heat on simmer and cook for 30-40 minutes, until lentils are tender.  When they are tender, add the tomatoes and spinach.  Cook until spinach is warmed and stir to distribute.  Top with tzatziki, sour cream, or yogurt.  Enjoy!
Posted by Unknown at 9:15 PM

Oh, that is a tragedy! I feel your pain. Been there, done that.

I hate it when I do things like that!

Food tragedies are the worst :(