This weekend is Easter and one of the things associated with this time of the year (for some reason) is the bunny rabbit.  Though that is not the reason for Easter, it is fun to play.  But why not the turtle?  That is a cute, green (spring color) animal, right?  Hmmm.  A couple of months ago, I found a recipe for turtle cookies at Emily's site. 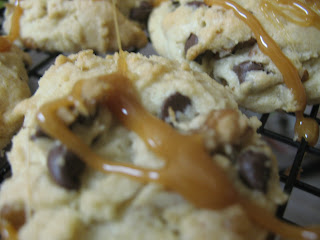 This produces a crumbly (in a good way...like a sandy) cookie with caramel on them.  The only problem I had was that the caramel got REALLY hard after I drizzled it.  Now, this could have been because of the caramel I used.  Maybe adding some milk to it when I melted it would have helped.  I don't know but the cookies were great! 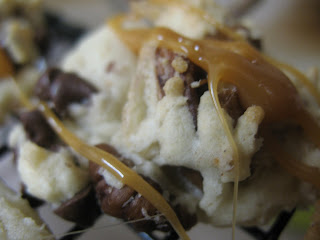 Before I give you the recipe I'd like to share why I celebrate Easter.  All of us sin and this keeps us separated from God.  No matter how hard we try, we can't be good enough on our own. But God WANTS us to be His!  He gave us a way to be with Him.  He sent His Son, Jesus, to earth to live among us and live a perfect life.  Then despite not sinning Himself, Jesus was sent to the cross to suffer death, the penalty for OUR sin.  He sacrificed His life for us, for YOU!  That is how much He loves you!  His death paid the price for our sin.  But three days later, He rose from the dead.  He lives!  People saw Him.  This resurrection gives us righteousness and life forever with God.  All you have to do is trust Him, believe that He died for you and trust Him.  His death has paid the price for my sin and His resurrection has given me life...and can give the same to you!  I think THAT is reason to celebrate!  Thank God for His grace and mercy to us! 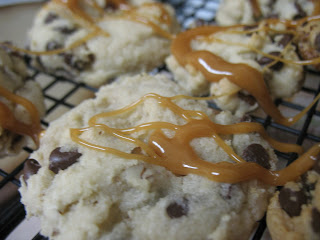 Melt butter in a small saucepan over medium heat; cook for 3-4 minutes, stirring frequently, until butter browns and starts to foam. Remove from heat to cool.

In a medium mixing bowl, sift together flour, baking soda and salt. In a large mixing bowl, using a mixer on medium speed, beat together melted browned butter, brown sugar and granulated sugar until creamy - about 1-2 minutes. Beat in egg and vanilla until combined. Reduce mixer speed to low and gradually beat in flour until just combined; stir in chocolate chips and pecans until combined. Chill dough in the refrigerator for 30 minutes.

Roll dough into balls (about 2 teaspoons per ball), place on cookie sheets, and flatten using the palms of your hands. Bake 8 minutes or until set and light golden. Cool on wire racks. Drizzle with melted caramel.
Posted by Unknown at 8:56 PM

I need His grace and mercy every day :) Those cookies look delicious, I definitely need to try this recipe!

Have a blessed Easter.

1st of all, Happy Easter and thanks for the reminder of what it is all about. It is so quickly to let that slide with the hype of how we commercialize holidays these days.

I hope you are doing well, Claire!

This I have got to try! Those photos made me crave for cookies! Have a happy and extremely blessed Easter!

Welll ... I *do* think of lots of baby bunnies in the spring. Other than that? You got me.

Happy Easter! He has risen!

The cookies are cute, but your explanation of the meaning of Easter is awesome. May God bless you and keep you. Happy Easter!

I liked the look of those turtle cookies on Emily's blog, too. I would put some hot cream in with the caramels when melting, it makes it a more soft caramel, even after it sits, even wait until it thickens a little. Kind of like making a ganache, but with caramels not chocolate. But yum!
And I'm a little late to your Easter celebration, but fully agree with you! ;)