Maybe this is a new way to get kids to eat their veggies!  They all like pudding, right?  So make broccoli pudding!  Sounds disgusting?  Weeeeellllllll, I have to admit...this is not an American style pudding...it's a traditional British steamed pudding. 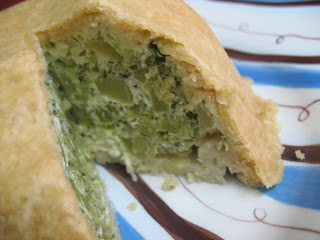 Why did I make a British Pudding?  It's Daring Baker time!!!! The April 2010 Daring Bakers’ challenge was hosted by Esther of The Lilac Kitchen. She challenged everyone to make a traditional British pudding using, if possible, a very traditional British ingredient: suet.  Suet is basically animal fat, the kind found around organs...the kind that if found in humans is VERY unhealthy!  I must admit, I didn't use suet.  I used a vegetable shortening...which was allowed!  There are multiple types of puddings.  You can boil or steam a pudding. 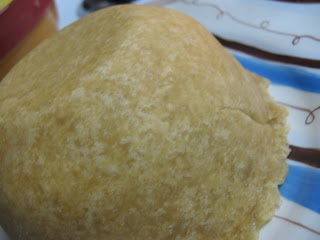 We were supposed to steam ours, which I thought sounded better anyway.  There is a traditional steaming bowl used in Britain; however, I didn't have this, so I just used a bowl with a rim and placed this in my steamer/pasta drainer thingie.  It worked perfectly!  Other options are to make a sweet pudding (sticky toffee pudding anyone?) or savory.  I did not make a sweet version but many of these end up looking like a cake.  The savory versions, however, look like a pot pie!  In fact, after seeing someone use chicken, carrots, peas, and a white sauce as a filling I realized that this really reminded me of those frozen chicken pot pies...I LOVED those as a child!  Anyway, I decided to go with a broccoli filling.  I simply put frozen (yet, not defrosted at all) chopped broccoli inside the suet (shortening) dough along with a couple of eggs for binding and some goat cheese and topped it with the remaining dough.  The outcome?  Well, at first I thought it wasn't done after 3 hours of steaming. 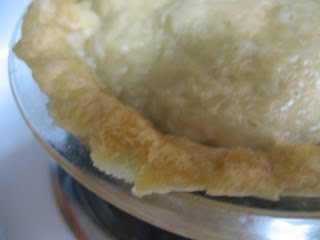 However, I realized that the exposed part of the dough was just moist from the steam and the dish was really cooked.  The crust was perfectly flaky and the inside perfectly cooked!  It reminded me of a delicious broccoli quiche but with crust surrounding it.  Would I make this again?  Probably not...though it was pretty hands off it just cooked for too long.  However, I am glad to know about the steaming method of cooking entire dishes.  Quite an interesting concept that produces a very tender and (if appropriate for the dish) flaky result.  Thanks, Esther, for the great challenge! 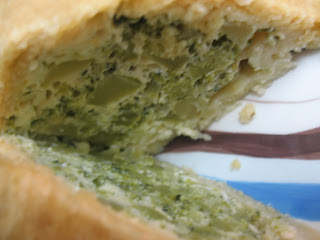 Ingredients
(250 grams/12 ounces) Self-raising flour (Note* If you cannot find self-raising flour, use a combination of all-purpose flour and baking powder.)
(175 grams/6 ounces) Shredded suet or suet substitute (i.e., Vegetable Suet, Crisco, Lard)
(a pinch) Salt and pepper (Note* If making a savory dish, can be replaced with spices for sweet if wished.)
(210 millilitres/a little less than a cup) Water (Note* You can use a milk or a water and milk mix for a richer pastry.)
1. Mix the flour and suet together.
2. Season the flour and suet mixture with salt and pepper if savory and just a bit of salt and/or spices if sweet.
3. Add the water, a tablespoonful at a time, as you mix the ingredients together. Make up the pastry to firm an elastic dough that leaves the bowl clean. The liquid amounts are only an estimate and most recipes just say water to mix.
4. Don’t over handle the pastry or it will be too hard.
5. Reserve a quarter for the lid and roll out the rest and line a well-greased bowl.
6. At this point add your filling.. a couple of options are give below but have fun and go wild!
7. Roll the final piece of pastry out into a circle big enough to cover the top of the basin, dampen the edges and put in position on the pudding, pinching the edges together to seal.
8. Seal well and cover with a double sheet of foil – pleated in the centre to allow room for expansion while cooking. Secure with string, and place it in a steamer over boiling water.
9. Steam for up to 5 hours, you may need to add more boiling water halfway through or possibly more often. There is a lot of leeway in this steaming time and different recipes give different steaming times. I steamed mine for about 3 hours.
Posted by Unknown at 6:49 PM

Sounds greaat! I love broccoli, although I usually just steam it...perfect if it is fresh broccoli. Your crust looks great!

Well well I just love broccoli and your pudding looks perfect to me the texture of the pastry is spot-on and the filling is so yummy great work on this challenge. Cheers from Audax in Sydney Australia.

Never heard of it. Interesting.

Broccoli and goat cheese sounds interesting! It must have tasted great :)

Interesting! I have to admit I don't know if I could eat a whole pudding that was made out of a broccoli filling as I usually think of broccoli as a side dish, but a very interesting concept to ponder. Nice job on your challenge!