When You Don't Have Time

My time in the kitchen has been limited recently. Some of that because I'm lazy and some of it true lack of time. I know that a lot of people have this "issue" as well. However, all of us like a good homemade cinnamon roll from time to time. A while back I found a great looking recipe for cinnamon roll muffins that claimed to have the taste of cinnamon rolls but made much more quickly than those delectable treats. 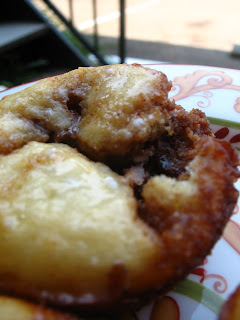 I decided to take these one day last month for call instead of cookies...I had been reprimanded for bringing cookies because apparently some residents don't have much self control. I figured that muffins would be less harmful as there are less per batch and you can tell how many have been eaten. :-) 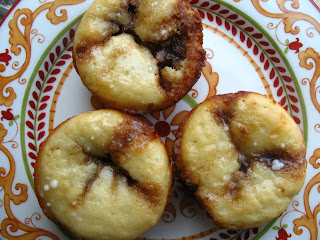 These muffins were very good and did have a cinnamon roll taste about them, but the texture is obviously different. Part of that may be due to the fact that I did have to modify the recipe slightly...I didn't have any yeast; so, these were your traditional muffin. The original recipe may be more like a cinnamon roll than the muffins I ended up with. Try for yourself! 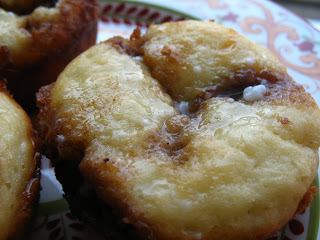 In a large bowl, combine flour, sugar and salt. Stir milk, vegetable oil, vanilla extract and egg into the flour mixture. Mix well, until very smooth. Pour into prepared pan and let rest for 15 minutes.
While the dough rests, mix together butter, brown sugar, cinnamon and cardamom in a small bowl using a fork (or fingers) until all the butter has been incorporated into the sugar and mixture is crumbly. Divide the batter between 12 greased muffin cups. Sprinkle evenly on top of rested dough and press the mixture down into the dough with your fingertips (or swirl in with a spatula.)
Place pan into a cold oven, then set the oven temperature to 350F.
Bake for about 20 minutes, until bread is lightly browned at the edges and the center of the bread springs back when lightly pressed. Some of the sugar mixture on top may still be bubbling.
Cool for at least 30 minutes before whisking the powdered sugar and milk together to form an icing and drizzling it onto the bread.
Posted by Unknown at 3:58 PM

I have these bookmarked, too! They look so yummy.

If you are looking for tour&travels related information, you can scan the resource page of herbsncures.com and get travel related links on the resource section of the website.

I LOVE cinnamon rolls. I can only imagine how delicious these muffins were.

Claire, those muffins look amazing, and I can almost taste them, thinking of Cinnabon in a muffin, but with a soft, cakey muffin texture. I wouldn't want any yeast in my muffins..those look perfect! ACK, I've been so busy lately, I haven't been keeping up my blog surfing..but that'll dissipate once I get everything done :)

I made these once also a few months ago. They weren't bad, but I felt like it was just about as much work (minus the rise time in traditional cinnamon rolls). I'd rather take the time for real rolls, BUT, they definitely got eaten and no one complained!