In the medical field, there are many times that you consult someone to deal with a specific problem because they are an expert on that problem. As a general (most likely) pediatrician, I have to be knowledgeable about most areas of a child's health; however, I won't know the intricate details of how to deal with specific heart problems or neurological issues. I'll call an expert for that. Well, the blogging world has it's experts. If you've ever stopped by Peabody's site, you know that she is an expert at desserts. She makes some of the best looking confections EVER. If I had a question about a dessert, she would be one of the first people I'd ask...in fact, if I'm looking for a dessert recipe, her site is one of the first graced by my fingers. A few months ago I spied these snickerdoodle blondies of hers. Now, who doesn't like snickerdoodles? I don't know but if it's you, there must be something wrong! Anyway, I decided to whip these up one day (don't remember why). I made a small change to her recipe (because of supply) but it still turned out fabulous...nice and moist with that perfect blondie texture. Try them out sometime soon! 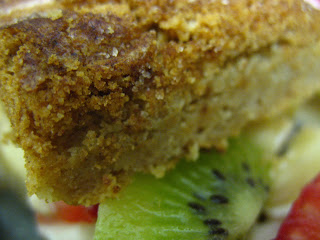 Cinnamon Sugar for coating (about 1/3 cup)

Preheat oven to 350F. Butter a 9 by 13-inch pan.* Sprinkle cinnamon sugar and move pan around to make sure that the bottom and sides are coated. Set aside. In a medium bowl, sift together the flour, baking powder, baking soda, salt, and cream of tartar.

Using an stand mixer, cream together the butter and sugars. Beat for three minutes. Scrape down the bowl. Add the cream cheese and beat until fully incorporated. Add eggs, one at a time, scraping down the bowl after each addition. Add the vanilla and beat for another 30 seconds.
On low speed add the sifted flour mixture. Spread mixture evenly into prepared pan. This will be hard as it is a thick batter. As Peabody suggests, it is easiest to just wet your hands a little and press the batter into the pan. Then even it out afterwards with a spatula. Sprinkle more cinnamon sugar on top of the batter. Bake for 20-25 minutes.

*I'm almost positive that I halved this recipe...and it worked out just fine.
Posted by Unknown at 10:15 PM

LOL- I am so far from an expert. :Blush:
Glad you like the blondies though, they were a big hit at my house.

Mmm, love snickerdoodle cookies, so what's not to love about these? They look delicious!

I'm going to point Alice to this recipe. We'll let you know.

Pearl - It was perfect.

Peabody - Well, more of one than I!

These look really good. It looks like I may have to try these too!

I left you a long reply about Caiden.
Thanks for asking about him. :)