Before I show you an easy recipe for King Cake, I want to tell you about a contest at Southern Plate. Christy is giving away an AWESOME Wilton cupcake set. This is a sacrifice to tell you about this contest because I really want to win this...but telling you about it gets me extra entries, so I'll be nice. Drop by here and enter!

I guess I celebrated today a bit early...I had my pancakes on Saturday when I went home! However, the pediatric chief resident's wife, Maggie, gave me a recipe for King Cake that I was excited to try. 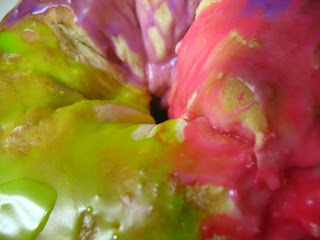 Overall, this is a very simple recipe. The first proof is only an hour long and the second probably about the same, though I wouldn't know because I accidentally missed that you were supposed to let the formed ring rise! Ooops...wonder if that had anything to do with it being underbakes....ooops again! This was REALLY good. It tasted just like a store bought (which in MS is good) King Cake. 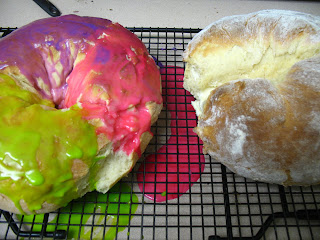 The recipe had a simple cinnamon-sugar filling, but on request of my friend Sarah (the one who just had the baby) I did a sweetened cream cheese filling. Makes me wonder if the filling is the reason it was underbaked. The cream cheese certainly added moisture and thickness, so maybe I should have cooked it longer to start with...hmmmm. Overall, I highly recommend this recipe. It's quick and easy and makes TWO cakes...one to keep and one to give away! 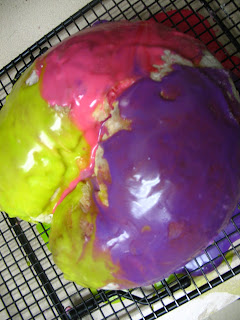 For filling, combine sugar, cinnamon, and flour. Set aside with butter. OR cream together cream cheese and sugar.

When dough has risen one hour, punch dough down, and divide in half. Turn one portion of dough out onto a floured surface, and roll out to a 28 by 10 inch rectangle. Repeat with remaining dough portion. Spread butter over each rectangle and sprinkle with filling or spread with cream cheese mixture. Roll up each rectangle jellyroll fashion, starting at short side. Place a token plastic baby inside each roll. Gently place each roll of dough seam side down, on a lightly greased baking sheet. Bring ends of each roll together to form an oval ring of each roll. Cover and let rise in a warm place, free from drafts, until double in bulk.

thank you for sharing!

i can't wait for pictures!!

mine were usually underbaked in the middle, too. i found that when i bumped the time up 7-10 minutes, they baked through, but it does seem to make the crust a bit tougher, especially the longer the cake sits on the counter. i know, duh, right?

so glad you enjoyed making it! it's a fun cake to make and yes, it makes a GREAT gift!! especially when a plastic baby it tucked inside :)

I wish I saw this recipe BEFORE Lent started!

Maggie - I hope you come to see it! :-) I'm going to have to make this again next year for sure...and I'll cook them longer!

EMD - The cream cheese ones are the best. I actually liked this better than the store bought ones.

What fun, I haven't made a king cake in years.