The last day in the city...boo! We made it a "late" morning and left around 10. The bus to FOREVER to get there and then to FOREVER to get into the city. It took us until 11 to get there. Then we had to ride downtown on the subway. When we arrived, we saw the WTC site (from only one side). That area is HUGE! It just amazed me how big the area was and then realized that on Sept 11, that area was just bedlam. There were so many buildings close by that looked untouched, though I'm sure they've been renovated/fixed up since then. Then we walked through Battle Park and caught the Staten Island Ferry. 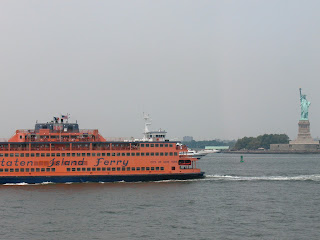 It was a nice ride over because we had the breeze. It wasn't quite as brisk on the way back but was still beautiful. 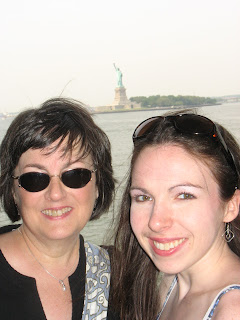 We then "sprinted" to Brooklyn, as we were already late, to meet a friend at Grimaldi's for lunch. 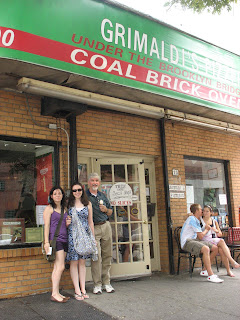 This was the BEST pizza! We had ham, mushroom, and onion. One thing that made it so good is that they use fresh mozzarella. 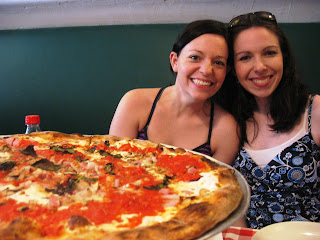 Oh, so good. Then my parents and Holly had ice cream from a little shop under the bridge. 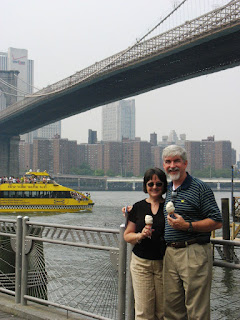 I was determined to have gelato, so I didn't get any. After the walk across the bridge, 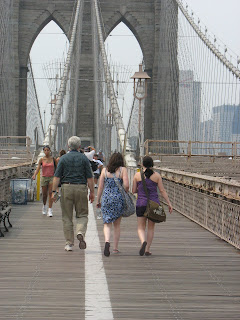 we went to Chinatown and Little Italy...where I got my gelato! I had pistachio flavored. It was really good but I think I would have prefered a different flavor. 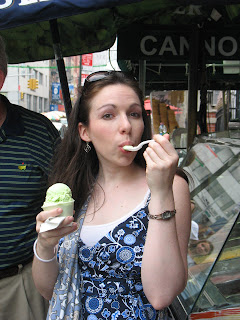 Then we went to the Harley shop where Daddy did NOT get a $45 t-shirt! Too expensive...at least we had fun in F.A.O. Shwartz! That place is so much fun...too many pictures to show, but I did play of the BIG piano! 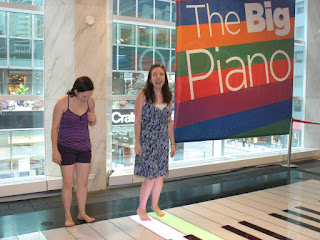 When we left, we went to get dinner before our final Broadway show. Holly had mentioned this Argentinian place she used to work at, so we went there...Sosa Borella. It was great (and put ice in the water!). Daddy had lemon rosemary chicken with gorgonzolla mashed potatoes. 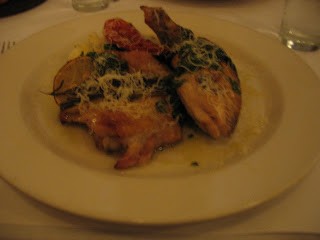 Mama had a spinach ravioli with lamb bolognesse. I had the crab salad...mmmm! 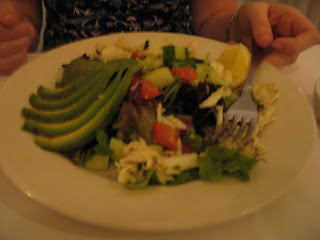 Perfect and light after pizza and gelato! THEN we went to Mary Poppins. This show was SO much fun! Not one that you want the CD for but very enjoyable. I wanted a Spoonful of Sugar Helps the Medicine Go Down T-shirt but they don't make them! 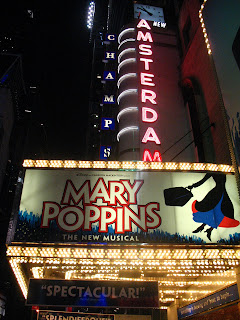 And so ended our trip to NYC. I really enjoyed it and would love to go back sometime. We had a great variety of food and there was so much more to sample! 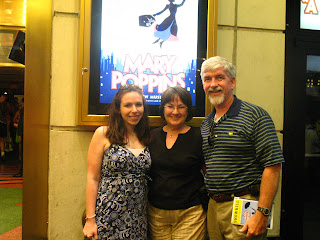 It looks like you had a great time. Believe it or not, I have never been to NY and I live in New England. Well thanks to you I got to see some great parts of the big city!

Sounds like you had a great time in NYC ... at least the weather wasn't too, too hot. :) You are totally making me want to go see a play now. The last one I went to was Rent (which was fabulous) some 11+ years ago!

What a fun trip y'all had! Love that pic of you and your mom, a framer for sure. Wish you could have seen the WTC before; the height scared me. And I've always wanted to walk across the Brooklyn Bridge! I'm jealous and have to go back someday to do that.

That sounds like so much fun. I love the pic of you and your Mum - it's just gorgeous!

I just got caught up & read all of your NYC posts.
What a wonderful vacation you got to have with your parents! Thanks for sharing all of your memories, pictures, & food pictures with us!
You will have these great memories for your whole life. What a blessing!
:)
Now I have to get off this computer & go make some cookies for our daughter to take to a youth group picnic tomorrow.