Just a question and reminder 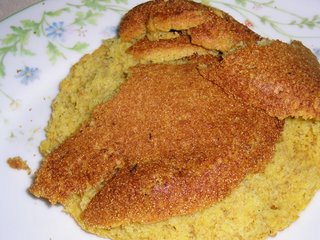 Just thought I'd remind you to stop by Sweetnicks for her ARF-Five-A-Day round-up. There promises to be many yummy and healthy recipes as there are two weeks of recipes in this group. I have submitted my pizza recipe.

Now for my question. I made soup last night, which I will post about later, and thought that corn bread would be the perfect complement. I have used this recipe before and it turned out just fine. However, last night, despite using a seasoned cast iron skillet and shortening, the break stuck to the pan. I ended up with the crispy bottom pulling off the bread. The only change I made was to use 3/4 cup milk and 1/4 cup yogurt instead of 1 cup buttermilk because I had none. The texture was great but kind of pulled apart! Anyone have an idea as to why this happened?

Hope you are all having good weeks so far. Tomorrow is the middle of the week and for once I wish it was a longer week so I could study more! Oh, well!
Posted by Unknown at 5:48 PM

Hmm, I would think that should have been a good sub...not sure about why it did it.

That sounds like it would be a good substitution - not sure why it would do that. I hope someone can let you know because now I'm curious.

I think that just happens sometimes, especially if you're not really generous with the shortening, butter, bacon grease, etc.

I have no idea, sorry. I've never made it that way before, but it looks like it was delicious just the same!
Sorry I couldn't be as helpful as you were with my question. :(

Thanks for all of your responses. I guess it was just one of those days and the cornbread was being stubborn! I think the yogurt and milk was a good substitution...it tasted just as it should.

I simply can't understand WHY you would substitute yogurt for buttermilk, unless you didn't have any buttermilk. Seriously, they're almost the same thing, with possibly a little more butterfat in the buttermilk, but not enough to be concerned about. Oh, yeah, the yogurt would have a sharper taste, something to do with acid. Remember in Bishkek when we wanted to make pancakes, we'd get the kefir at the market...liquidy yogurt.

Daddy - I DIDN'T have any buttermilk, that's why I made the substitution. I didn't notice any difference in the taste. Yep, remember kefier. How 'bout smitana?! The shortening was DEFINITELY hot enough. It sizzled like bacon! Maybe it was too dry in the air...HA! Dry...Mississippi? Have fun in Louisville. BTW, I need a cookie report.

Next time you are out of buttermilk, try sour milk. To 3 tablespoons of white vinegar, add enough milk to make 1 cup. I use this substitution often and it hasn't failed me yet.

Cyd - Thanks! I've used this before but couldn't remember the ratios, so I just figured that I'd try some yogurt. I decided it would give the right tang!

Cyd's right on with the substitution.

What type of milk/yogurt did you use? Buttermilk typically has a low fat content. Other than that, I have no idea what could have gone wrong...

Maybe your oven decided to join mine in a rebellion against our baking! ;)

VC - I know the milk was skim, not sure about the yogurt. It didn't have much fat in it; however, I honestly don't think that was the problem. I just think my pan/oven/weather was being finicky.

I have no idea either... I don't actually use buttermilk in the cornbread recipe I use, mostly because I never have it on hand unless I specifically buy it for a recipe. I have heard of the yogurt sub before, so I bet that wasn't the problem. Probably just a fluke with your oven.

As long as it tasted good, that's all that would matter to us!