I went to visit my parents this weekend in Jackson, TN, their new home. Mama found the Farmer's Market and we made a little trip out there Saturday morning. They have a few more interesting things than my local market. Here is the entrance. It is an open air market, but Saturday was GREAT weather (highs in the 70's!). 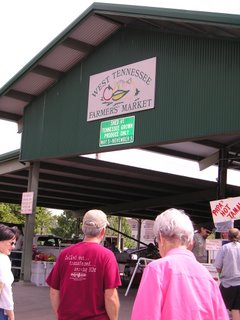 At the entrance to the market, just before you get to the veggie stands is a little tamale vendor.
We tried some, but when we reheated them, they got tough, so I don't know how they tasted! 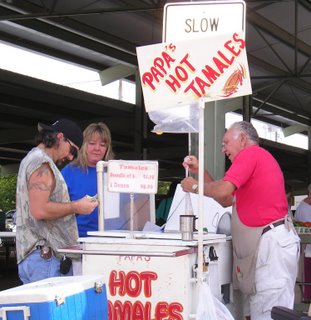 They have a lot of good looking veggies here. Instead of selling by the pound, they sell by the basket. Most baskets were $2. However, judging from the hanging scales, which I though were SO neat, they weight the produce before they put them in the baskets. 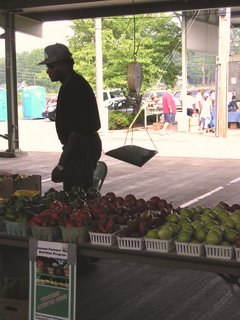 We decided to extend my eggplant experiment and try some white eggplant. According to the vendor, they are not bitter and are a bit sweet. I don't know that I agree but will tell you about them later. 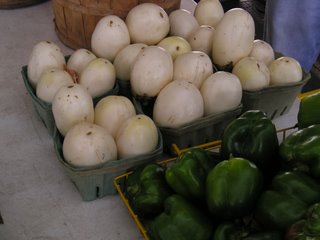 This is just a sampling of the beautiful peppers that were available through the entire market. There were also stands with plants, watermelons, and baked goods as well as jellies, sauces, and aprons (I saw a really cute one. It was just a half apron.). 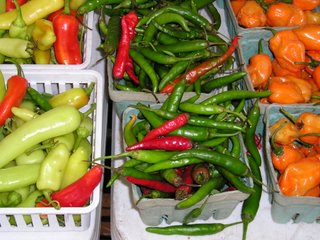 Many of the vendors also have their own pea shellers! I though this was really neat! The peas go through the machine, the hull goes into the bad, and the peas come out the front so they can put them into a bag to sell. Talk about fresh! 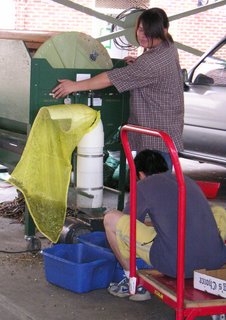 On the outside of the covered area, there was an Amish/Quaker/Menonite (sorry, I don't know which) family selling homemade preserves (regular and sugar free, all which looked GREAT!), sorgham, jellies, cheese, and milk. There was a line for their fare. The milk was sold for $1.75 for a half gallon (which is a good price, cheaper than the stores here). They had whole, 2%, chocolate, strawberry, and buttermilk. They were also selling butter. Talk about fresh! 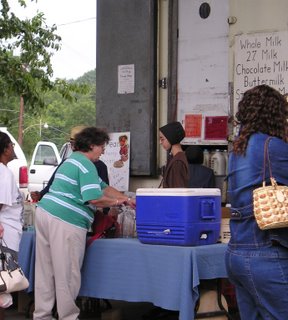 On the other end of the market from the tamales, was a guy selling Chicago style hot dogs. Sorry that the picture is of his back. Right when I took the picture, he turned away from me! 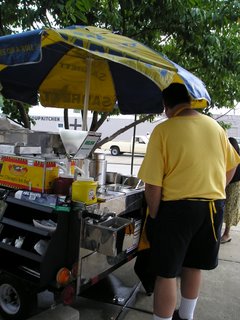 This is what we ended up with: 4 white eggplants, 4 zucchini, tomatoes, "spice" tomato salsa, lemon grass (!), and okra. Yummy stuff! 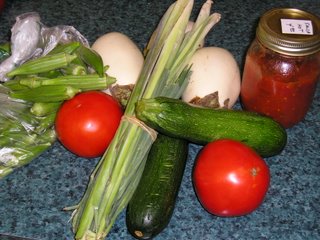 Ah, phooey! I'm so jealous. I didn't get to the auction Friday nor did I get anywhere else. My produce bins are practically empty.

Paula - Sorry about your rain out. Honestly, I'm low on veggies too because most of this stayed with my parents or is already eaten!

Ooh, this looks like a nice market! Glad you got some cool stuff. I have still not been to the one here, phooey. Maybe one day I will make it! :)