A Recipe and A Teaser! 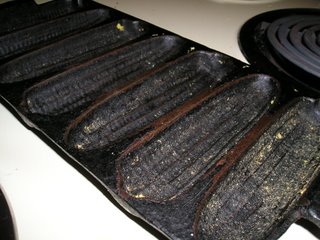 Okay, so my camera wasn't broken....it was out of battery power. I guess I just thought that the lithium batteries would last longer than they did. Oh, well. Sooooo...here I am with a picture of the cornstick mold and corn bread recipe!

I have several food memories associated with my mom's parents from growing up. My grandfather had a great garden in his backyard, so we often had vegetable dinners. That, combined with my grandmother's corn bread sticks, is one of my special memories. So, when we were cleaning out their house after they passed away, the corn bread stick pan along with a cast iron "kitchen" that I played with were the two things I "had" to have. Now whenever I make cornbread, I use those molds (partly because the cast iron pan I have only holds about half a recipe of cornbread!). The recipe I use is also a corn bread recipe my grandmother used. It's my dad's favorite!

Now for a quick teaser! Return the next few days for a series of posts leading up to a yummy breakfast treat and something you can use EVERYDAY! 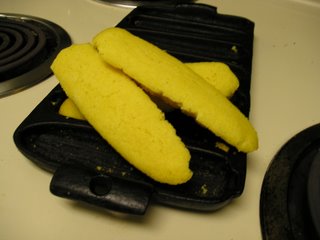 Preaheat oven to 400 degrees F. Put shortening in a cast iron pan and place in the oven. Stir together corn meal, flour, baking powder, salt, and baking soda. Add buttermilk and egg. When the shortening has melted, remove the pan from the oven and pour shortening into the better. It should sizzle! Stir into batter. Pour batter into hot pan (more sizzle!) and put in oven. Bake for 15-20 minutes. I'd check at 15 minutes or earlier, as you do not want to overcook this! If you don't eat all the cornbread, store in the refrigerator and enjoy later. It saves well for a couple of days. Don't worry, it won't last much longer than that!

You can use a muffin tin to make corn muffins. Adjust time accordingly. It may need just SLIGHTLY less or the same. Just check the muffins!

Cornbread goes well with anything: vegetables, fish, chicken, mexican! Take your pick. It's even good as a "dessert." Just warm bread and butter. The put your favorite jam, jelly, preverve, or honey on top! Tada!
Posted by Unknown at 3:05 PM

I have always wanted to buy one of those molds!!!

Ivonne - Thanks for dropping by! I think the cornstick shape makes eating it that much better!

That mold is adorable. I love cornbread toasted for breakfast.

Thanks for posting them. Now I get it. How great. I love corn bread and corn muffins, especially grilled with melted butter on the top.
I also love to put blueberries in the corn muffins sometimes for a different twist. They are awesome!

Sara - Thanks for dropping by! I just love cornbread, too!

Annie - The blueberries sound great! I love those berries, but there are starting to get expensive around here again!