Another Saturday of Famer's Market

Two weeks in a row! Yes, I went to the Farmer's Market again. I really like getting my produce there. I figure I'm supporting local people and the quality of the produce is SO much better that in the grocery store. When I go, I like to browse the stands before I pick anything out. Today I bought everything except the garlic at one stand. I've already decided that I like this stand the best. It is run by a little old lady and sometimes a "helper." Her fare is so pretty, and everything (barring the watermelons, etc.) is $1 per selected unit (weight, number of items, etc). Here is what I brought home this week. 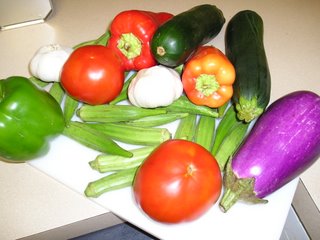 I'm planning on using one head of garlic to roast. We lived in Kyrgyzstan for a year and discovered garlic there. Roasted garlic is delicious! I've already used the okra and will post on that later. I haven't used the eggplant from last week; however, I'm planning on making Eggplant Parmesan and will put the two eggplants "together." I'm going to taste test them and decide which one I like better. I just couldn't resist this one! It's so round and bright! I've used some of the tomatoes (2 to be exact). I think I actually picked some that will be "small garden home-grown"-like. The zucchini will be used as a simple side veggie. Finally to the peppers! They were just so pretty that I had to pick some. Hey, at 3/$1 how could I not! Stay tuned to see how this wonderful fare is used through the week!
Posted by Unknown at 10:44 PM

I have two of those same pretty eggplants on my counter. I have no idea what I'm going to do with them. Maybe I'll just shellac them, they're so nice to look at LOL.

I am looking forward to seeing what you come up with. I love veggies!

Paula - I like the shellac idea! :-) I mean people take their dogs to taxodermy sometimes; why not pretty eggplant?!

Annie - I think I could live on vegetables. I'm not vegetarian but there are definitely days when I don't have meat.