Last month, the Daring Bakers challenge was for cinnamon rolls.  I knew that David would be super excited about it as soon as I saw it.  What a great opportunity to "have" to try a gluten free cinnamon roll recipe. 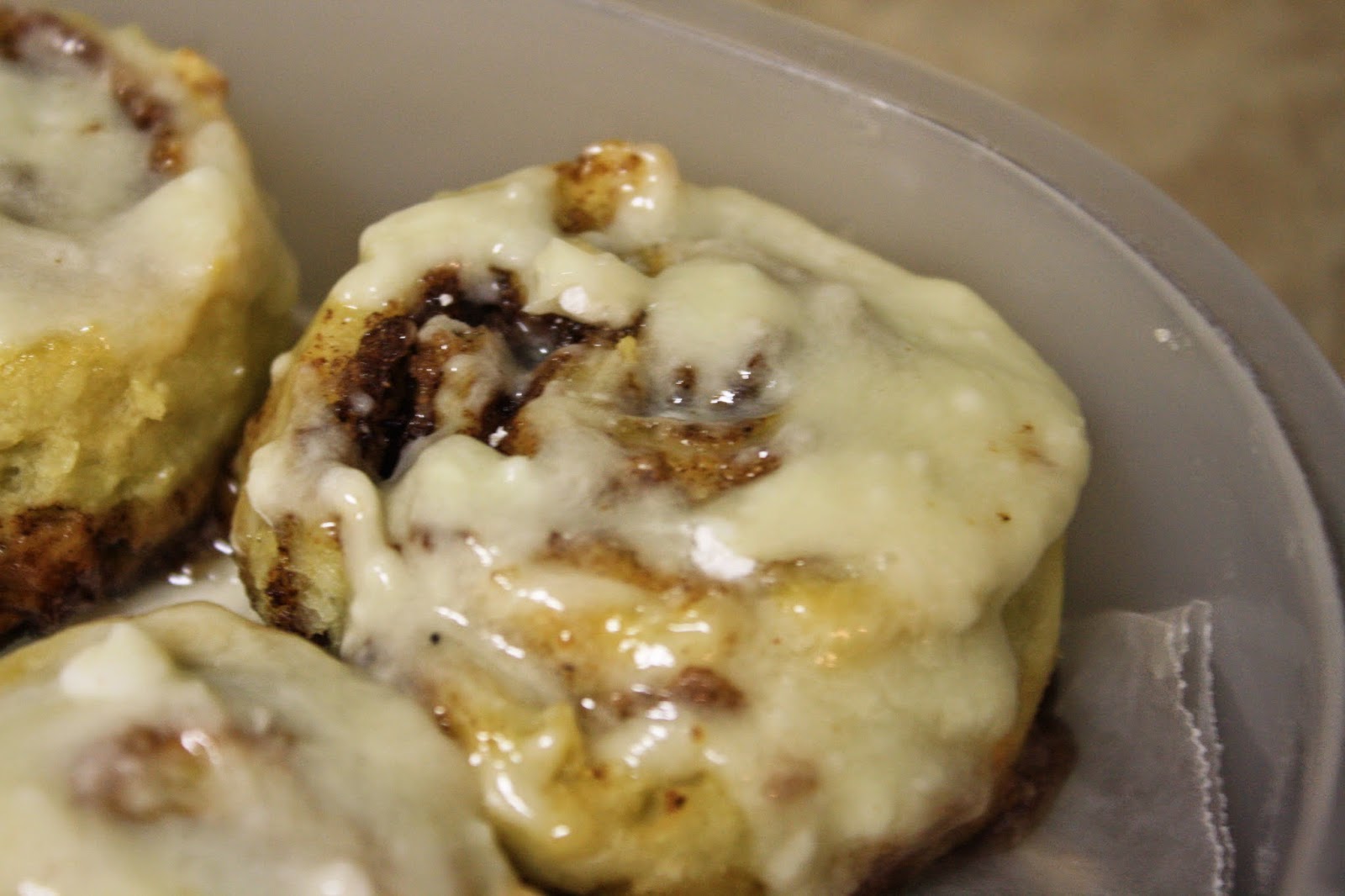 Now, I know I am late posting this; but, we have been moving and had a bit of trouble getting internet set u and reliable.  So, I'm posting now...about two weeks late!   Soooo....This month the Daring Bakers kept our creativity rolling with cinnamon bun inspired treats. Shelley from C Mom Cook dared us to create our own dough and fill it with any filling we wanted to craft tasty rolled treats, cinnamon not required! 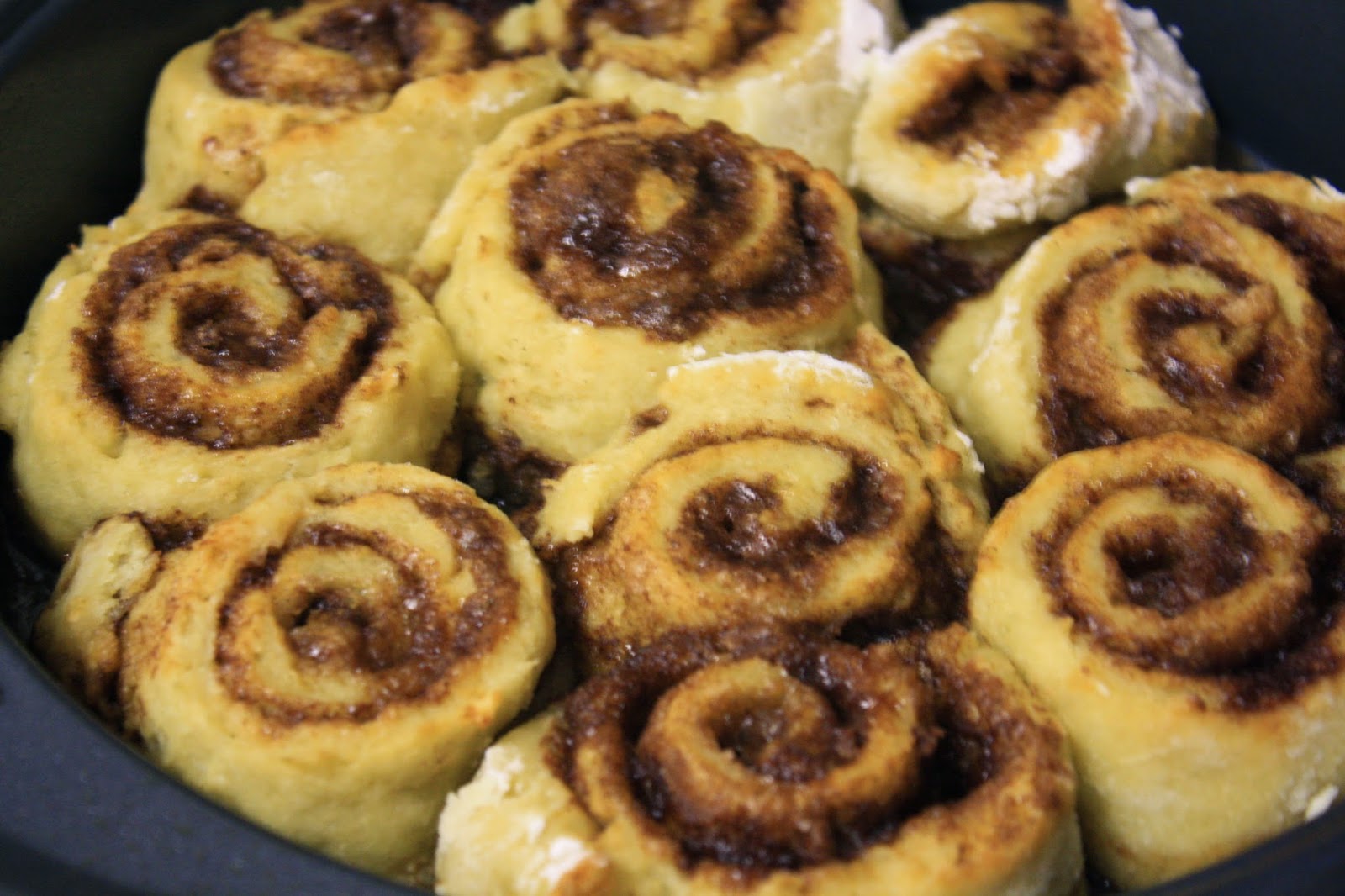 These actually turned out really good.  They were much better when heated.  David liked taking them for his "second breakfast" at work.  He said that warming it made the microwave made the icing run off some.  I guess one way to avoid this would be to reapply icing after you heat the cinnamon rolls if you don't eat them all at the first sitting.  I did make smaller rolls than the recipe instructed, so they lasted for more days.  The dough wasn't too difficult to work with but it did break a little bit when rolled.  All in all, I'd say it was a pretty good recipe and was quick.  If you need to make gluten free treats, try this one out! 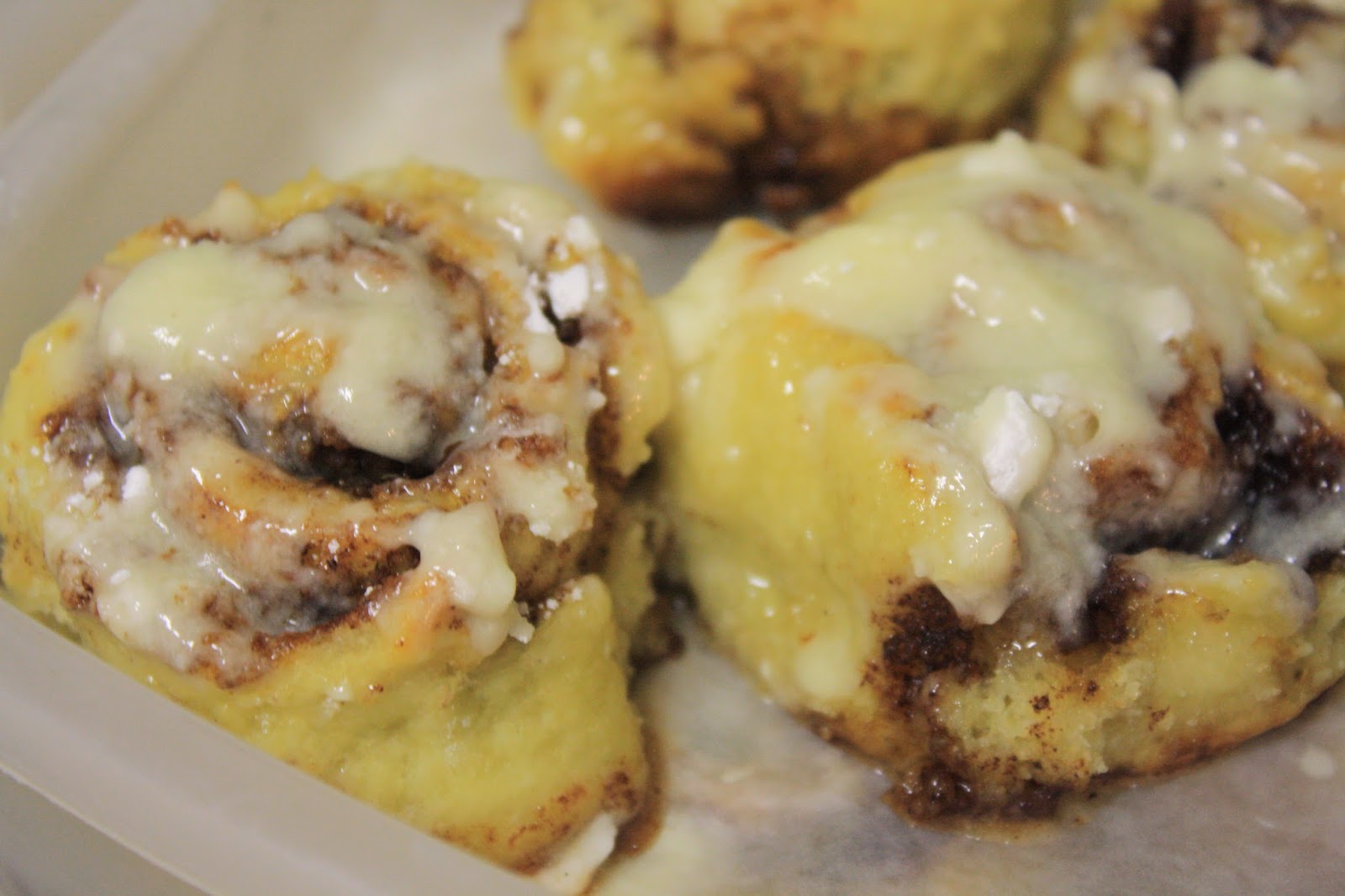 Gluten Free Cinnamon Rolls from Recreating Happiness
Ingredients
DOUGH:
FILLING:
*FROSTING:
*I just made a simple icing with no cream cheese but this would be good.

Instructions
DOUGH:
Combine yeast and sugar in large mixing bowl.  Microwave milk and 1 tablespoon butter to approximately 110-115 degrees. Whisk into yeast mixture and set aside to proof.
Meanwhile in small bowl whisk together potato starch, brown rice flour, tapioca starch, almond flour, baking soda, xanthan gum, baking powder, and ½ teaspoon salt.  Once yeast is proofed add in egg, oil, and ½ teaspoon vanilla. Mix for a moment and then slowly add in the flour mixture. Turn the mixer up to medium-high and beat for 1½ minutes - beating long enough is essential, GF flours are "thirsty," the dough will thicken & lose it's stickiness as you beat it. 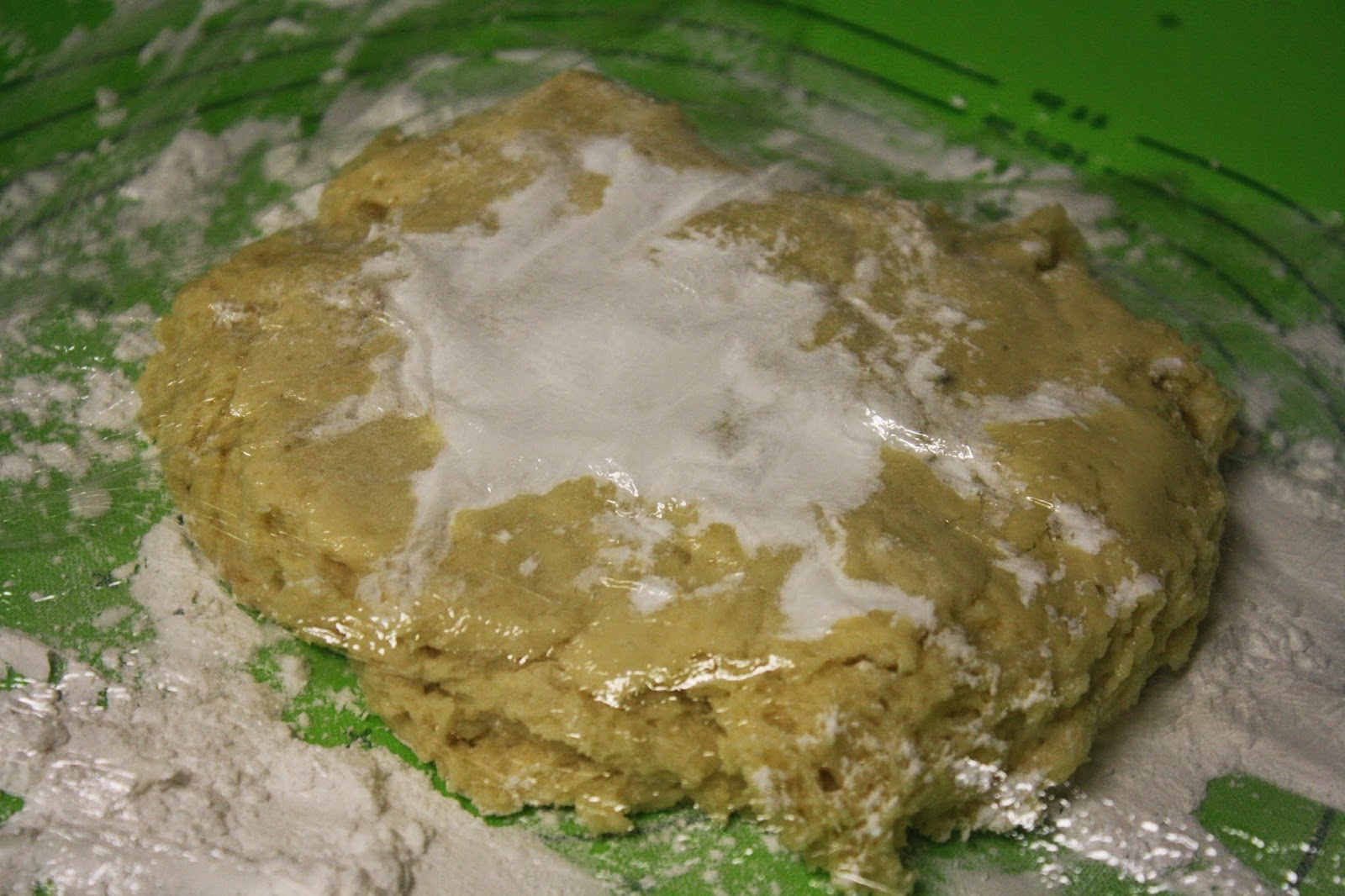 Roll out the dough: this is a sticky dough that you'll want to roll out to approximately a 13" x 10" rectangle. I placed tapioca starch on a pastry cloth but you can also use plastic wrap.  Place dough in the center and cover with a bit more tapioca starch (and another sheet of plastic wrap if using). Roll out to the needed size and then carefully peel off the top layer of plastic wrap.  Using a knife or spatula gently spread the ⅓ cup softened butter over the dough evenly leaving ½" space around the edges. 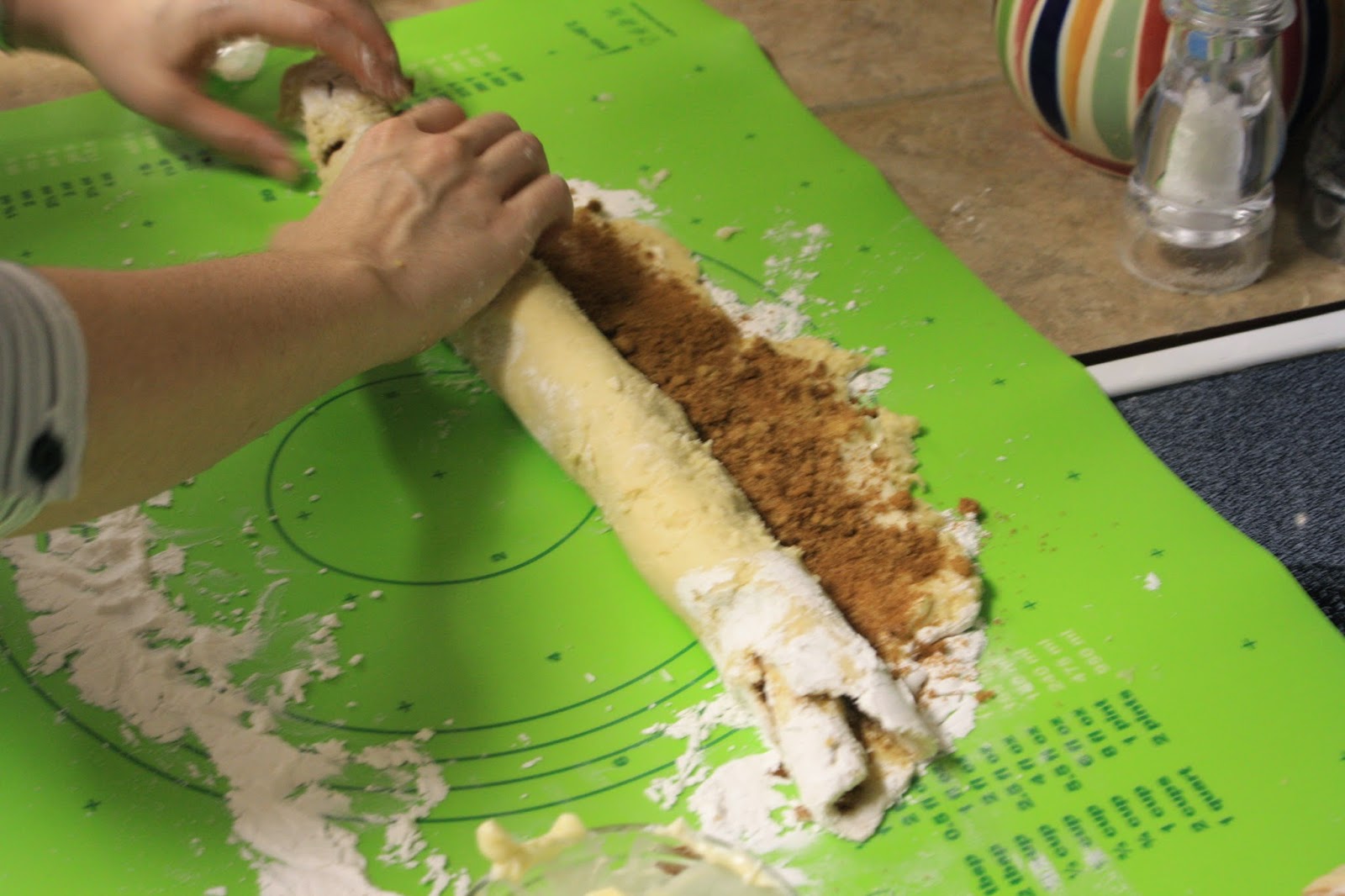 FILLING:
In a small bowl combine brown sugar & cinnamon. Sprinkle evenly over dough.  To roll your dough: start on one of the shorter sides and gently begin rolling your dough into a log form. Use the pastry cloth (or plastic wrap) to help you "lift and roll" the dough as you go along. Try to make it a nice tight roll, however do not try to unroll it and re-do it. You'll end up with a sticky mess.
Sprinkle lightly with tapioca starch again. Dip a sharp knife into tapioca starch then cut the rolls into desired number or size pieces.  Place the rolls, cut side down, in the prepared pie plate*. Cover with plastic wrap and a towel, place in a warm spot, and let them rise for 15 minutes.  Bake 22-27 minutes until tops are golden brown.
ICING: (Instructions for the cream cheese version are here)
Meanwhile, in mixing bowl, beat 3 tablespoons softened butter, cream cheese, and powdered sugar until smooth. Beat in vanilla and a dash of salt.  Drizzle over the tops of cinnamon rolls as soon as they come out of the oven.  Enjoy!
Posted by Unknown at 9:34 PM

Claire, I have found this gf flour at Walmart that is a 1:1 substitute for baking recipes….no one could tell a difference! It's called Domata.