The other snack dessert I made this Christmas was a snickerdoodle cookie dough bite.  The original recipe had rolos in the middle; however, I am a Reese's lover...so, I substituted Reese's for the rolos.  Um...YUM! My favorites all in one...snickerdoodles, Reese's, and cookie dough.  :-)  Now, to me, these had a better texture than the chocolate chip dough bites.  They had a bit more texture and were less "sticky." 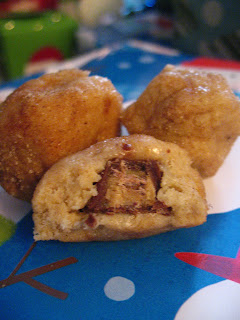 In a mixing bowl, stir together flour, 1 tsp cinnamon, nutmeg and salt, set aside. In the bowl of an electric mixer, cream together butter, brown sugar, 1/4 cup granulated sugar and cream of tartar until pale and fluffy, about 4 minutes. Stir in milk and vanilla extract. Add dry ingredients and mix until combine. In a separate small mixing bowl, whisk together 3 Tbsp granulated sugar and 3/4 tsp cinnamon. Scoop dough out 1 (even) TBSP at a time, then press one Reese's candy into the center of scooped dough and roll into a ball. Roll each dough ball into cinnamon sugar mixture. Chill or serve immediately. Store Cookie Dough Bites in refrigerator. Enjoy!
Posted by Unknown at 2:00 PM