This past weekend I went to AL to visit D and his family.  When he came to see my phiarents in February, Mama made a brownie trifle that he loved.  He told him mom that I was making it Saturday!  Okay, sure, I'll make it!  :-) 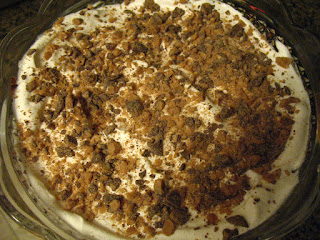 It is really an easy dessert to put together and chocolate lovers will enjoy it.  I'm NOT a chocolate loves and apparently neither is D's mom (I'm not alone! Phew!) but we both enjoyed this one.  I made it a little less "guilty" by using sugar free pudding and lite cool whip...though D tried to get me to use Dream Whip!  ;-)  You could even use the healthy recipe on the brownie box if you want.  This is perfect for an easy, eye-catching dessert.  Hmmm, try it out for Memorial Day!?  Sounds like a plan to me. 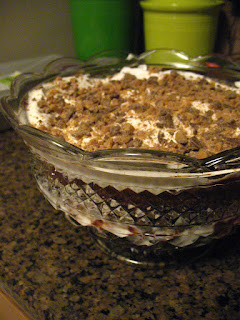 Brownie Trifle
1 box family size brownies (I use fudge style) - prepared according to the box
1 box chocolate pudding, prepared (I actually made two boxes just in case but one would work - didn't use it all)
1 small (8oz) cool whip
chopped toffee (I use the Heshey's Bits 'O Brickle, you could just chop up Heath bars) - about 1/2-2/3 cup

Prepare pudding as instructed and chill.  Make brownies per box instructions and allow to cool.  In a trifle bowl, place about 1/3 of brownies in small chunks.  I just remove the brownies from the pan using a fork, which chunks them with no effort! Place 1/2 pudding on top of brownie.  Top this with about 1/2 the cool whip.  Sprinkle with toffee pieces.  Repeat layers with remaining brownie, pudding, and cool whip.  Top with desired amount of toffee...I like a lot!  Enjoy now or chill and enjoy layer!
Posted by Unknown at 7:28 PM