One of D's and my favorite things to do for a random, unplanned supper is breakfast.  We've done pancakes, French toast, and eggs several times. I saw this recipe for waffles one day at Itzy's Kitchen and it looked really good. 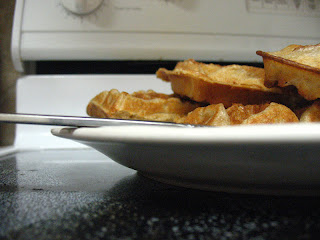 So, a month or so ago when I think one of us was post call we both said that waffles sounded good. When I was getting the ingredients together, I realized that you needed to let the batter sit for a bit, which my dad has done with his waffles in the past. 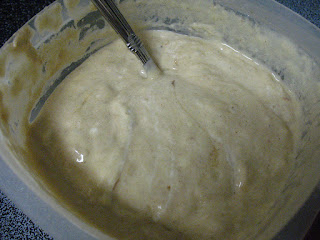 So, I made the batter before I left my apartment for D's house.  It really was the perfect amount of time.  These waffles were SOOOO good! 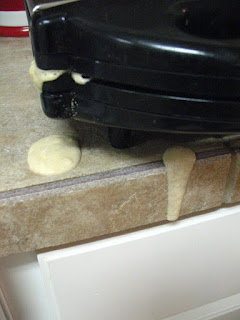 I got 5 waffles out of it, despite overloading one side and have a bit of spillage!  The cinnamon flavor was perfect and there was a bit of crunch but the waffles were still soft.  K actually ate a pretty good bit of hers. 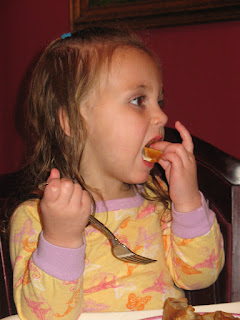 We used syrup and strawberries for toppings.  I will definitely use this recipe again.  Thanks for a great waffle, Itzy! 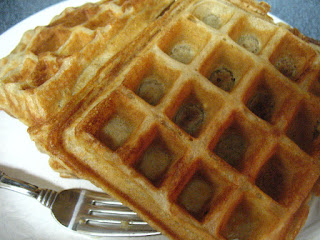 Whisk together the flour, cornstarch, baking powder, baking soda, salt, and cinnamon. Add the milk, yogurt, oil, egg, sugar, and vanilla and mix well. Cover with plastic wrap and let the mixture rest on your counter for 30 minutes (I made mine in a bowl that had a top for ease of transport). Preheat your waffle iron when your batter is ready to use.  After the iron has heated, spray your waffle iron with non stick spray. Divide batter evenly over the iron, careful to not overfill.  Cook according to the manufacturer's instructions.  Enjoy!
Posted by Unknown at 8:00 AM

Yum! Makes me wish I had a waffle iron, although sadly there is no room in my kitchen for any more gadgets.

Those are delicious! I totally need to cook them up again. Thanks for the shout out!!